Click here for a disclaimer that goes into more detail about what Fans vs Critics: Friday Feud is. I consistently link to the disclaimer so I don’t have to waste the time of return visitors with lengthy explanations. I give a little bit of insight into what it is throughout the article, but that’s about it.

It’s Friday so that means it’s time to FIGHT! Okay, I don’t really know if there’s a fight because I like to look at the charts as I’m writing this so I can learn along the way. It’s more fun for me and leads to better reactions than if I just poured over the data all day.

I’m getting ahead of myself. Welcome to Fans vs Critics: Friday Feud. What is this? Basically, each week I take data from IMDB, Metacritic and Rotten Tomatoes. I directly compare the user reception on IMDB with the critical on Metacritic since IMDB links to Metacritic. It’s possible to compare aggregated critical reception and audience reception on Rotten Tomatoes since they give both, so I pit them against one another.

Then I do some magic–it’s just a scale I made, it’s no big deal, y’know–and decide whether they have the same opinion, a similar opinion, a small difference of opinion or a large difference.

You’ll notice that these movies were released a few weeks ago. I do that to allow the audience ample time to rate the movies. The sample sizes are small but there’s still some merit in comparing initial reactions.

One last note before we begin. I use FirstShowing for release dates generally, and I see that they have Small Axe being released on Amazon as well. Since that is an anthology series I didn’t include it. It’s also not finished so maybe down the road I will.

Fans and Critics Are Buddies on IMDB/Metacritic 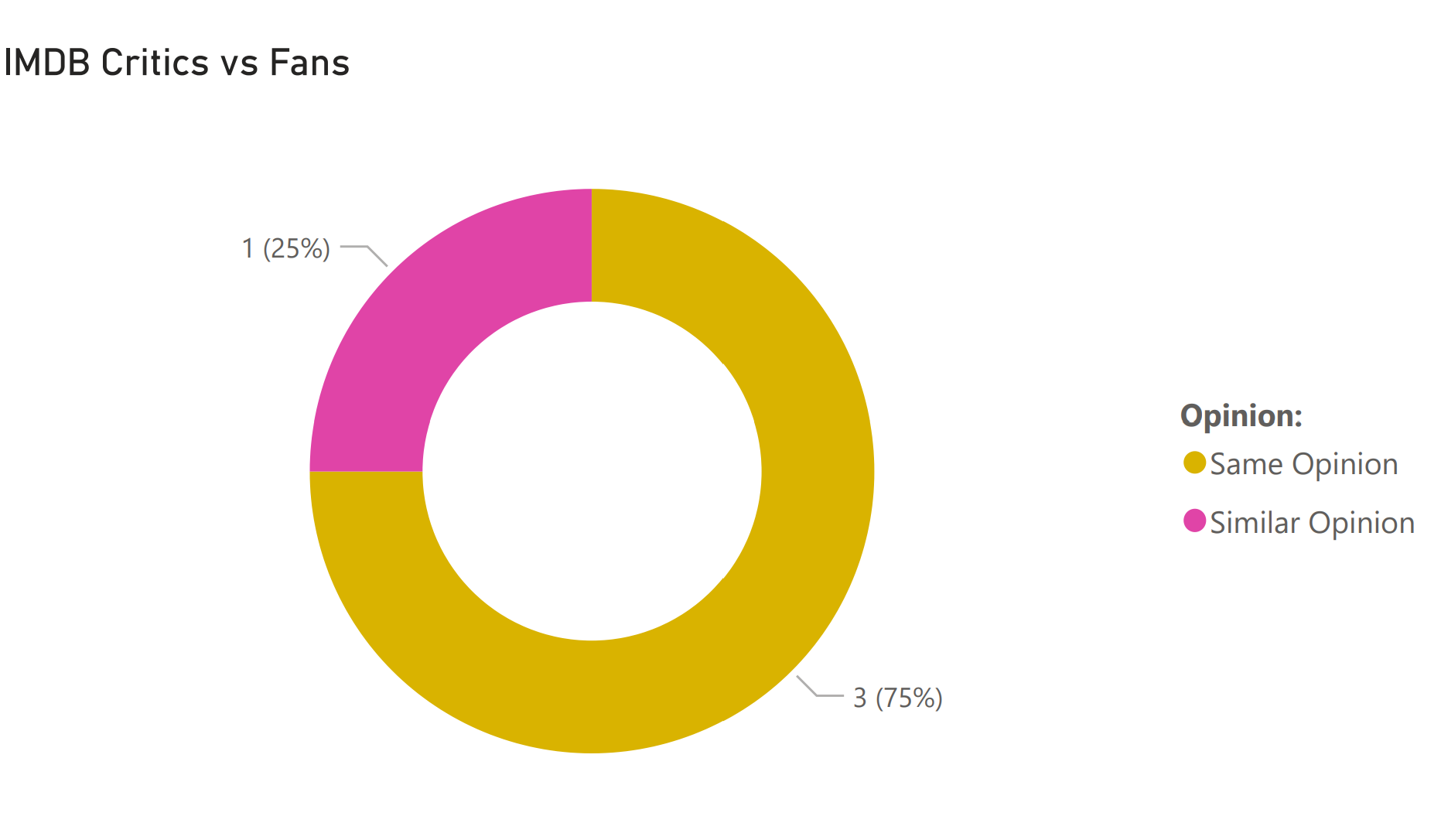 Much like last week, we see that on IMDB/Metacritic that there is a lot of love. I mean that literally since there is no real disagreement between the two camps, ultimately. Let’s break it down by film just to see how the numbers pan out. 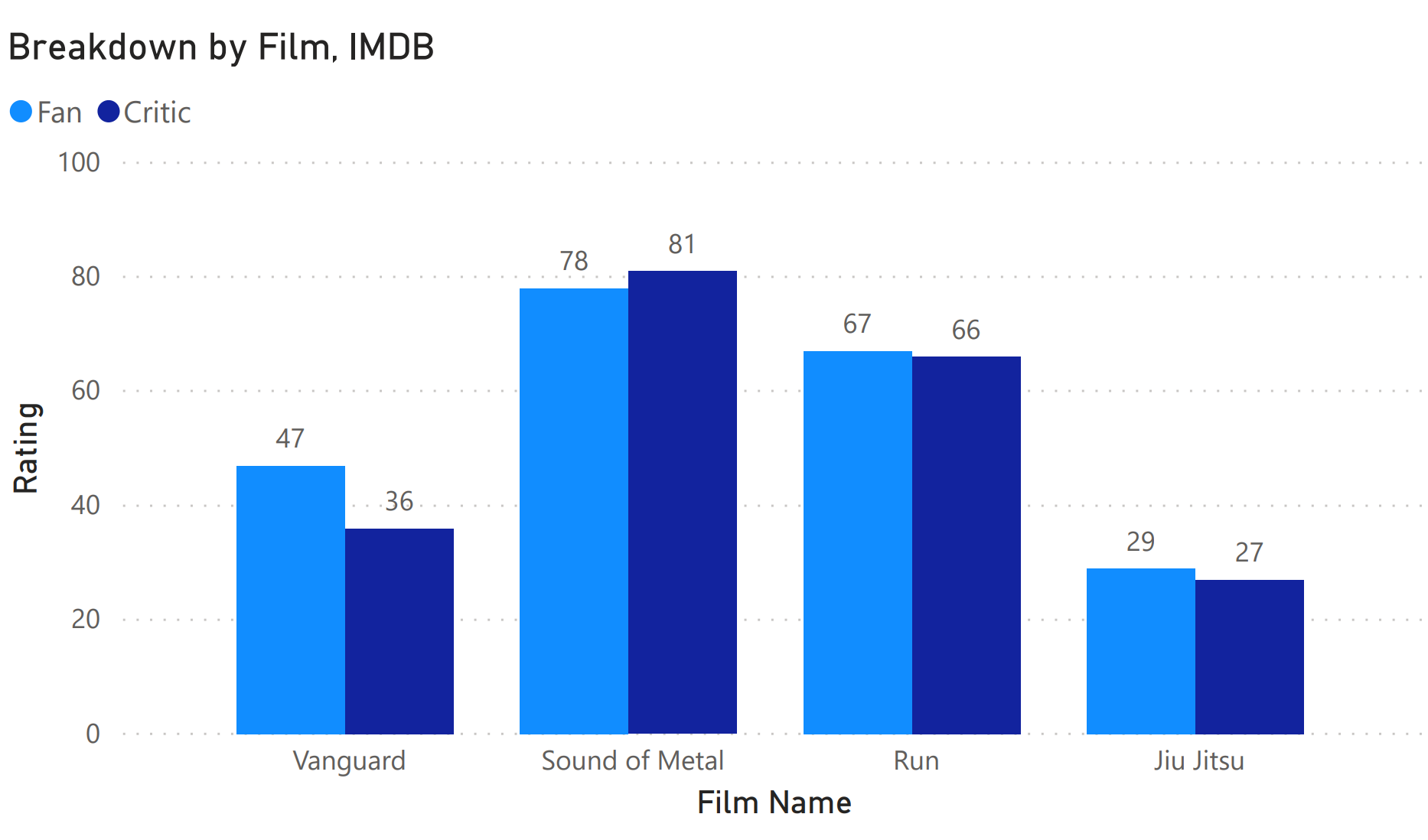 I thought that perhaps there might be some variance in how the ratings presented. What do I mean? Well, if you consider a rating of 50 to be a passing grade, then it’s possible that while the ratings may be similar numerically, one group may give it a passing grade and another may not. That’s the problem with only measuring by number.

But alas, Jiu Jitsu–which I reviewed here–comes close but fails. In the immortal words of famed ex-UFC commentary Mike Goldberg, “everything else is virtually identical.” 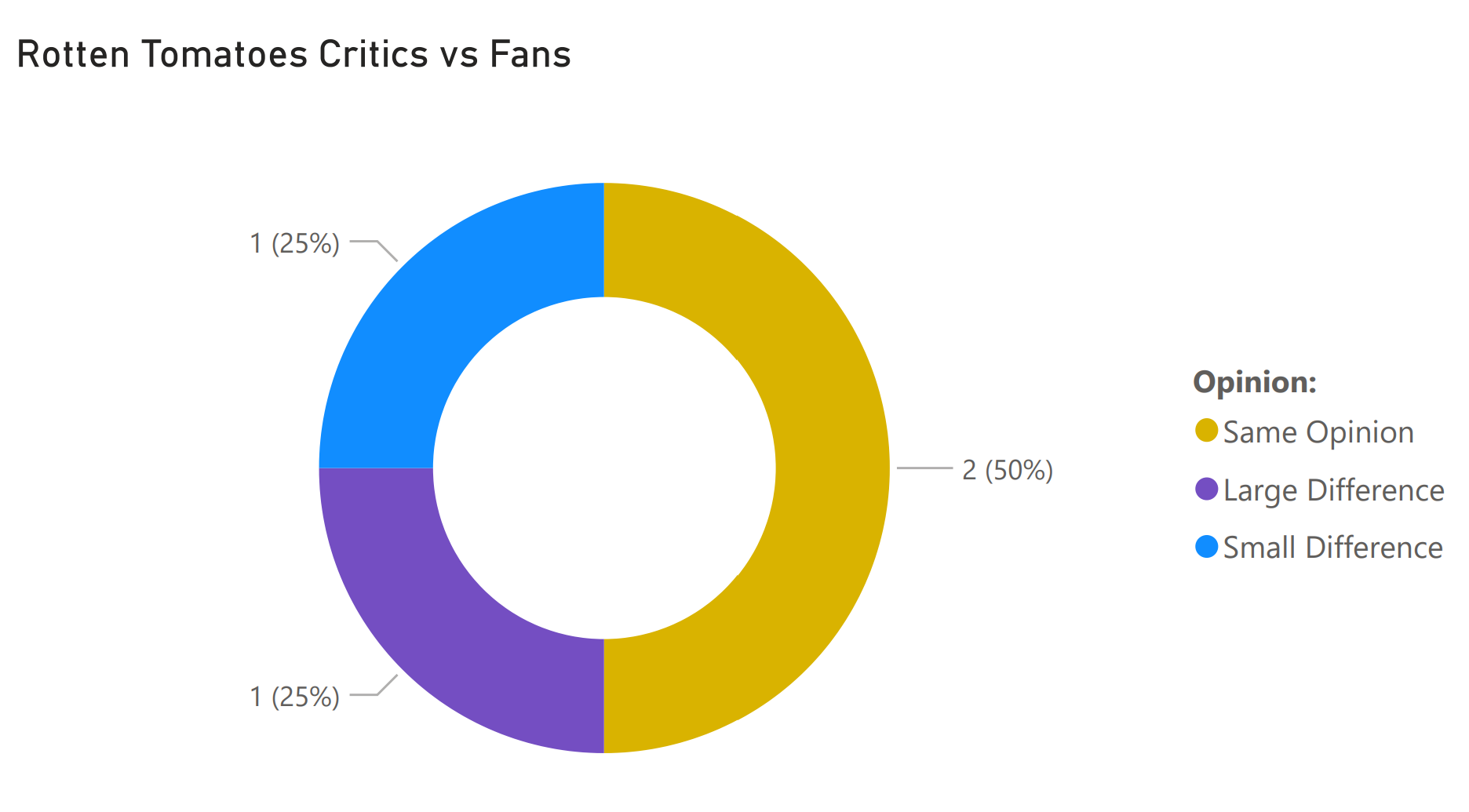 We’re seeing a lot of same opinions these days, which is not good for clickbait. Why are you trying to make me lose readers, internet? On the flip side, while there are two positive interactions, there are also two negatives. Rotten Tomatoes saves the day! 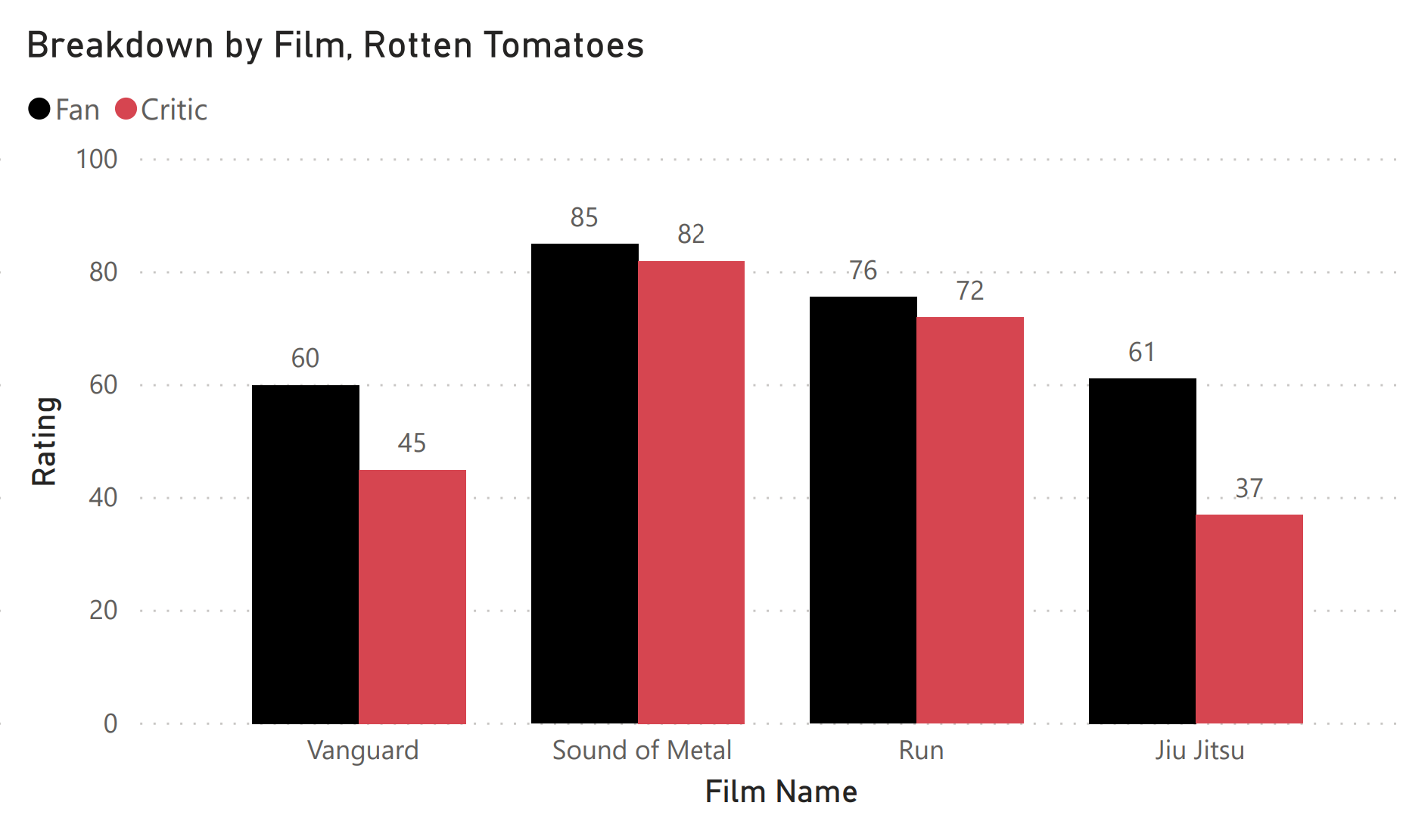 So, it turns out that people think that Sound of Metal is great (it is). You remember how five seconds ago I was saying how Jiu Jitsu comes close to causing a ruckus? Well, on Rotten Tomatoes it does! Not only is the reception significantly differently, one group actually enjoys the film and the other does not. So it birds two stones with one kill.

There’s another contender as well, but if we’re going to stick with mixed martial arts references, it’s more like a close decision victory for Vanguard. You see, there is a small difference of opinion, but it is on the cut-off point. It was almost a similar opinion. Move it one point and it changes.

Rotten Tomatoes: This week Rotten Tomatoes is split. 50% is full of hatred and the other 50% is admiration. We can work with this, although it’s important to note that the positive side is a little stronger due to there being two same opinions. If there were two large differences on the opposing side it would be more fair.

The Final Verdict: Rotten Tomatoes has always been like a powder keg, ready to go off. It didn’t really do that this week, but it keeps the danger alive by having a decent bit of animosity . One day there may be a Chernobyl–I finally got around to watching the excellent mini-series recently–style meltdown on Rotten Tomatoes, but that seems highly improbable on IMDB.

That’s It for This Week Unless You Would Like to See Me Go Deeper Into the Numbers. You’d Like That, Wouldn’t You? That’s Right, You’re Dirty…

As this awkward subheading states, this is time that I flesh out the numbers. The same websites are still being used, but IMDB provides a breakdown of the demographics, which I think is neat. Rotten Tomatoes doesn’t do that unless I’ve missed it, so there’s only one page of charts at the end. Until otherwise noted, I’ll be using IMDB and Metacritic. There’s not a whole lot to report on here because there’s so much comradery on IMDB. There are two observations I can make, and one is infinitely more important than the other.

Allow me to begin with the inferior point: the age group that forges their own way (screw you mom and dad, we do what we want) is the under eighteen crowd. The problem is, so few of them actually rate movies on IMDB that it’s impossible currently to tell if there’d be a pattern as time goes on. You could look at older movies across time and answer that, but that’s not what we’re doing here.

The second point is more of a question than anything. I notice when you compare the males and females, you find that males like Jiu Jitsu more. Six points is not powerful as a whole, but when dissected like this it’s a little more telling. It’s not surprising that the males prefer the action movie, but I have to ask the ladies, is Nicolas Cage attractive? Seriously, some women tell me he is and others don’t. Is younger Nic Cage the attractive one or do we like the older version too? Hit me up and let me know. 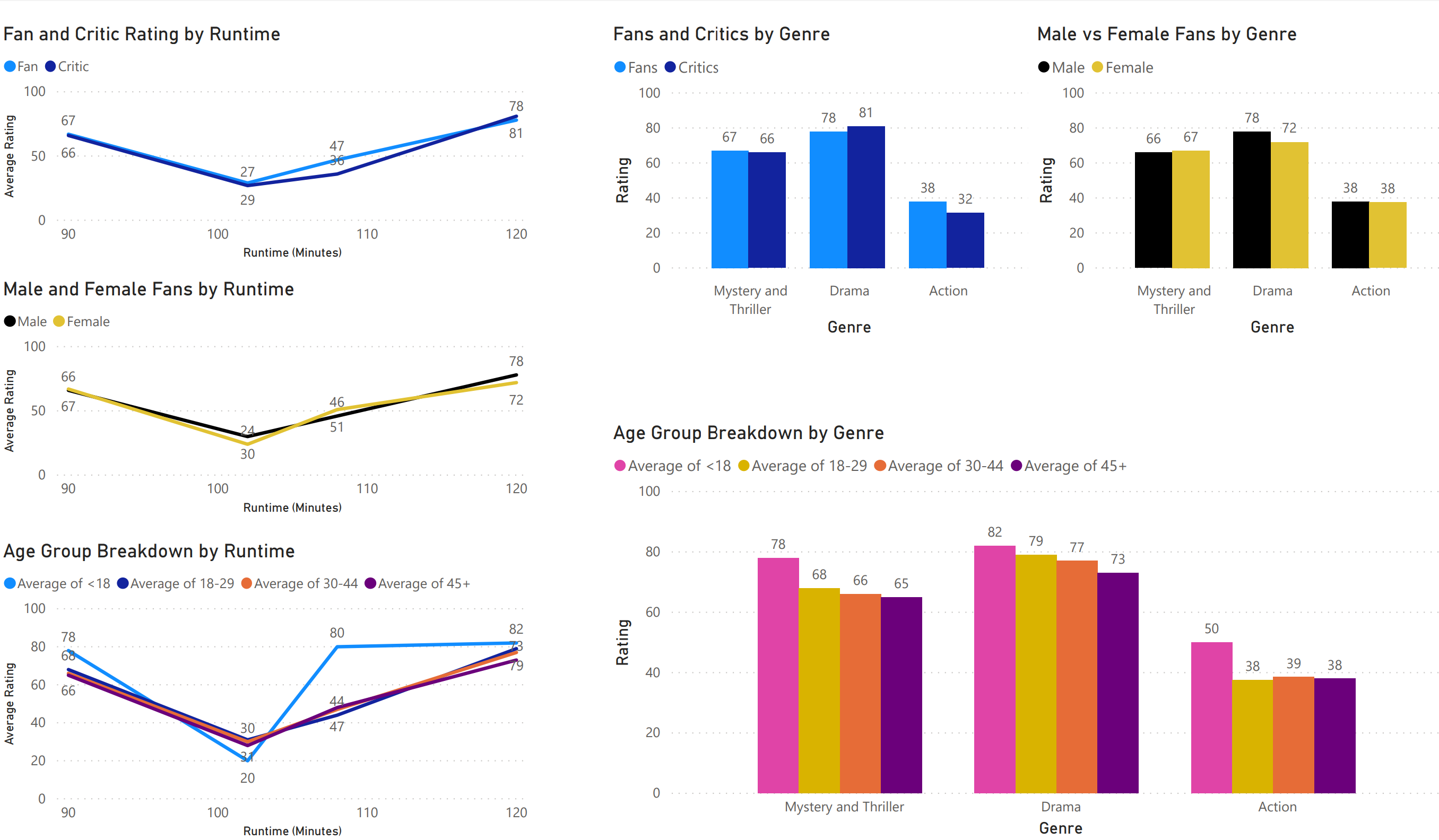 Okay, now that that silliness has ended, let’s get onto serious business. I was hoping that there would be something stupid I could comment on here but alas, no. It turns out that males and females feel the same about the action movies this week, even though they felt differently about Jiu Jitsu. Vanguard evened out the average and restored balance.

Everybody prefers the longest movie, but that is Sound of Metal, inarguably the best movie included this week. Did I say that you should see it? Because you should. 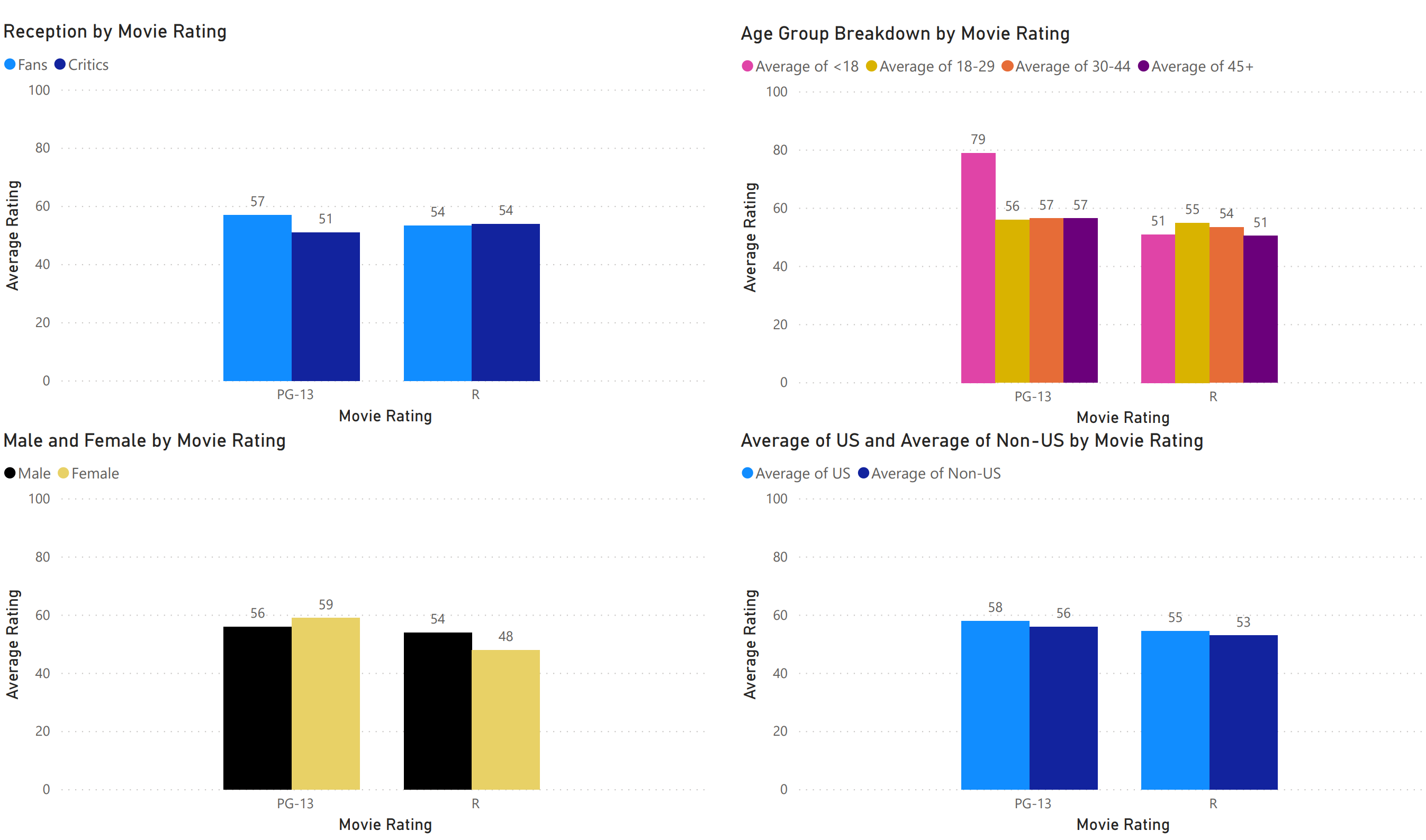 When analyzed by MPAA rating, it appears that people enjoyed the PG-13 movies more on average. This goes against the grain because a lot of the time it’s actually the R-rated movies that get rated the highest. This is only true for the critics, but that comes with a caveat that I am unaware how that breaks down by sex/gender. It would be interesting to see.

Even the youngins are more beguiled by the PG-13 flicks, and they’ve historically been the rebels who went with the R-rated movies; the movies they shouldn’t even be watching! The kids are alright, I guess. 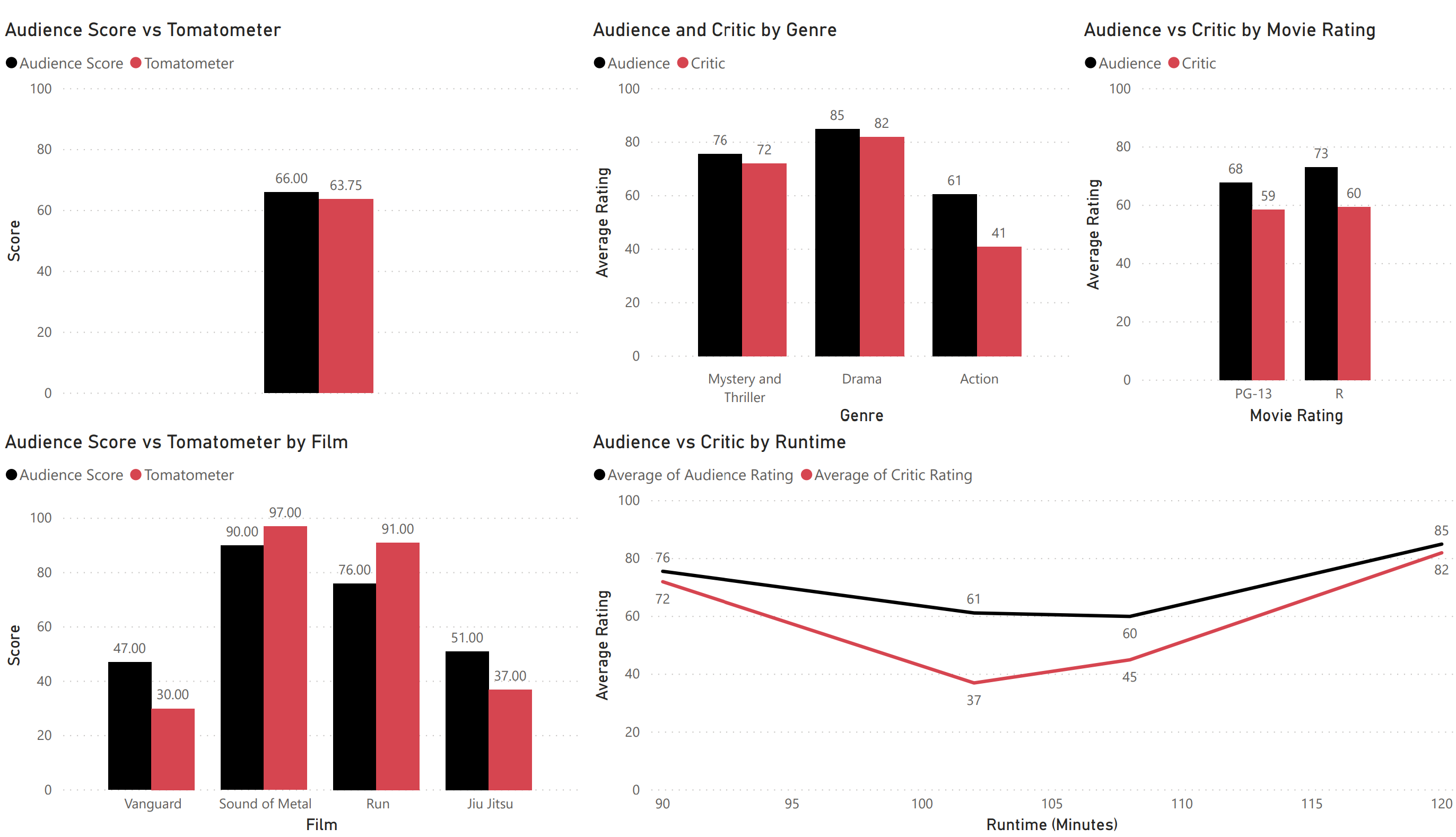 We close out the charts by returning to Rotten Tomatoes, the Shadow Moses of film criticism. Oh wait! Did you see that they’ve cast Oscar Isaac in the role of Solid Snake for the Metal Gear Solid movie? I know it’s a long ways away but damn! Let’s gooooo! I also just learned that he’s playing Moon Knight in the MCU. What the–is he just playing all the characters I want to see adapted nowadays? What was I saying? Oh yeah, the Tomatometer sucks.

Good transition, Tyler.
Thanks.
It’s all good my man.
Stop talking to yourself, it’s getting weird.

The Tomatometer doesn’t actually suck, per se. It’s a neat little tool, it’s just painfully misleading. Every week I rally against it like it’s an ex-girlfriend, but I have respect for it. You just need to know that it only represents the amount of critics that give it a passing grade. The Audience Score is analogous but with the fans. You could, theoretically, have a mediocre movie that gets a 100% Tomatometer score, even though that’s unlikely.

Just for the sake of analysis the Tomatometer and Audience Score has served me well because there’s usually movement. However, this week it has completely and utterly devastated that goodwill. Seriously, they’re almost the same? The only saving grace is that when you look at the charts in the bottom left-hand corner you’ll see that Jiu Jitsu is mildly recommended by the fans on average but not the critics. I suppose that’s something.

I feel like at this point you’re just watching a man descend into the madness of disappointment.

There’s quite a bit of difference when broken down by genre! If these reports were the definitive word on how people feel, we could say that the audience enjoys action movies more than critics. That would align well with the idea that critics are stuffy and can’t just let go, maaaan. I don’t actually think that, but it’s been floated around many times throughout the years.

I relish in seeing how people interpret stats. If you looked at the way the ratings spread out, you also see that the audience likes dramas the most–just like the critics. Not only that, but the fans just like everything more. I guess critics hate movies, huh?

This is how this experiment has gone since I began it back in September. I wanted to keep track and perhaps down the road do something with it. Even if I don’t, it’s exciting to watch it unfold. It’s like a nerdy race for people like me who have no lives.

It’s a lock when it comes to IMDB and Metacritic: they agree a lot more often than they disagree. Not only that, but they have the same opinion almost as much as they do a similar opinion! There was a time where that wasn’t true, but the last little while has really manipulated that.

With Rotten Tomatoes there’s still the hope that something unusual will happen. Say we had a month of mostly disagreements, these numbers could be dramatically altered. As it stands now, this website still has the largest percentage of large differences.

That’s it for this week. My attempt each and every week is to make this as entertaining as I can because I know just gazing at bar graphs, line graphs and pie charts can be dry and boring. These articles are fun to write, so let me know what you think in the comments below. Give me your judgment on how the data reveals itself to you.

Maybe this guy should make his own website for film criticism. It would definitely rival the others.