Fans vs Critics–December 18 2020: Hillbilly Elegy Is the Ideology War of the Season!

Click here for a disclaimer that better explains the methodology of Fans vs Critics. A separate link is included each week for the purpose of cutting down on how much fluff I have to make returning visitors read before we get to the good stuff. I explain a little bit about the process throughout the article but the disclaimer is the best way to understand.

Friday means different things for lots of people, but on Flickmetic? It means a fight. A fight between fans and critics, to be exact. Every week I take a few new movie releases and compare the reception of them on websites such as IMDB, Metacritic and Rotten Tomatoes. I compare IMDB and Metacritic since IMDB links to Metacritic for critical reception, and Rotten Tomatoes is self-sufficient so I can compare the audience and critics directly on that website.

Why would I do this? Thanks for asking. Over the years I’ve bore witness to the battle between the two groups. There are many who believe that they are such rivals that they couldn’t possibly discover any harmony with one another. You could take the data over time and analyze that, but when conceiving this idea I thought it would be fun to see how they react to movies upon their initial release.

Before we begin, I don’t really look at the numbers until I write this. This is an attempt to get genuine reactions to everything I find out, along with wanting to construct the narrative as I go. This isn’t meant to be a dry investigation so I prioritize entertainment even if there are moments where I get more serious. This is meant to be a little silly.

IMDB/Metacritic Runs the Gauntlet of Opinion 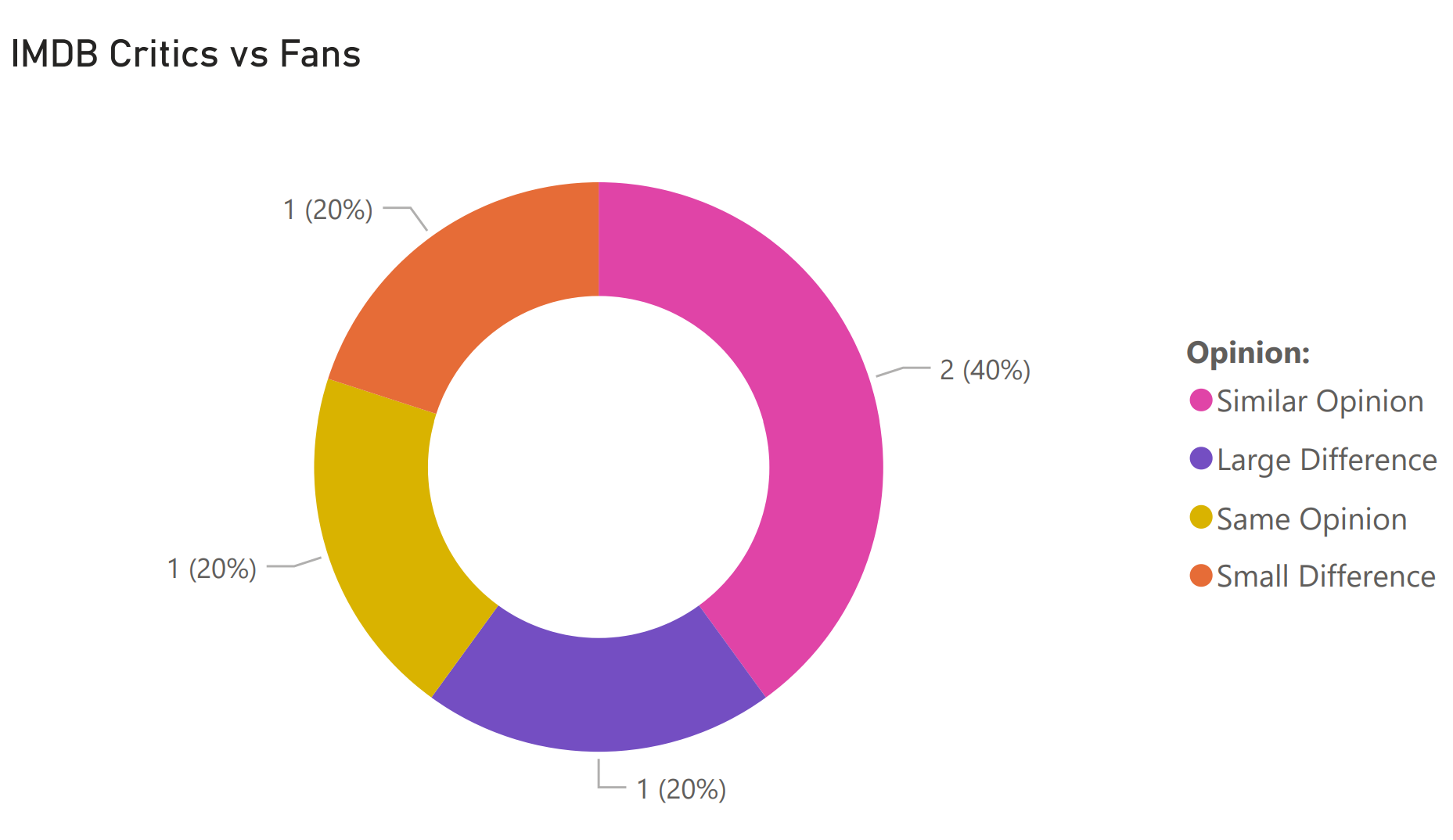 Since this began we have seen a lot more affinity than anything else, especially on IMDB/Metacritic (see the bottom of this article for the official tally). But this week we are inclusive! There are four different opinions that can be demonstrated according to my scale, and we’ve hit all four, baby! There’s still more agreement than disagreement but I like to see all options represented. 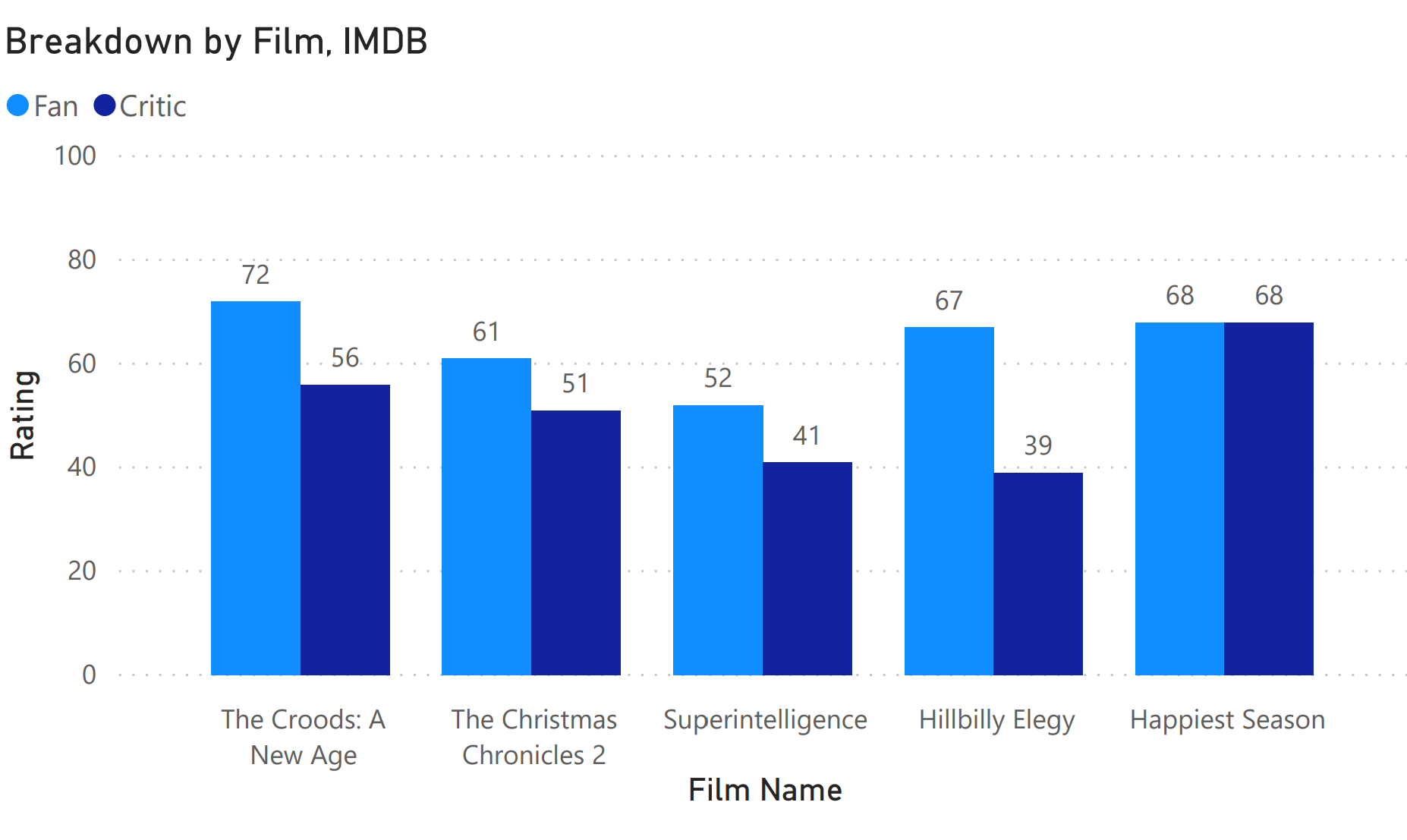 You know on May 27, 1996 when Scott Hall appeared on WCW Nitro and said, “You all know who I am, but you don’t know why I’m here” speech? That’s what Hillbilly Elegy is going to be like, a takeover. Before I compiled all the data I was aware of the controversy between certain groups regarding this film so I knew that other movies would have a hard time breathing this week. I can only go where the numbers take me!

We’ve seen vaster disparities in the past but you might say that the film is the elegy for the relationship between fans and critics. That was terrible but mom always told me not to apologize unless I mean it and I wouldn’t. You could philosophize and theorize about why Hillbilly Elegy is causing so many issues but it’s conservatives vs Hollywood. Detective Tyler is on the case. Pika Pika.

The Croods: A New Age is interesting to me and I will explore that as we go on most likely. Before we move onto Rotten Tomatoes I just want to say that everybody agrees on Happiest Season and I’m no different. I rated it a 7/10 so I’m only two points above the average so there’s a kinship forming over that movie. 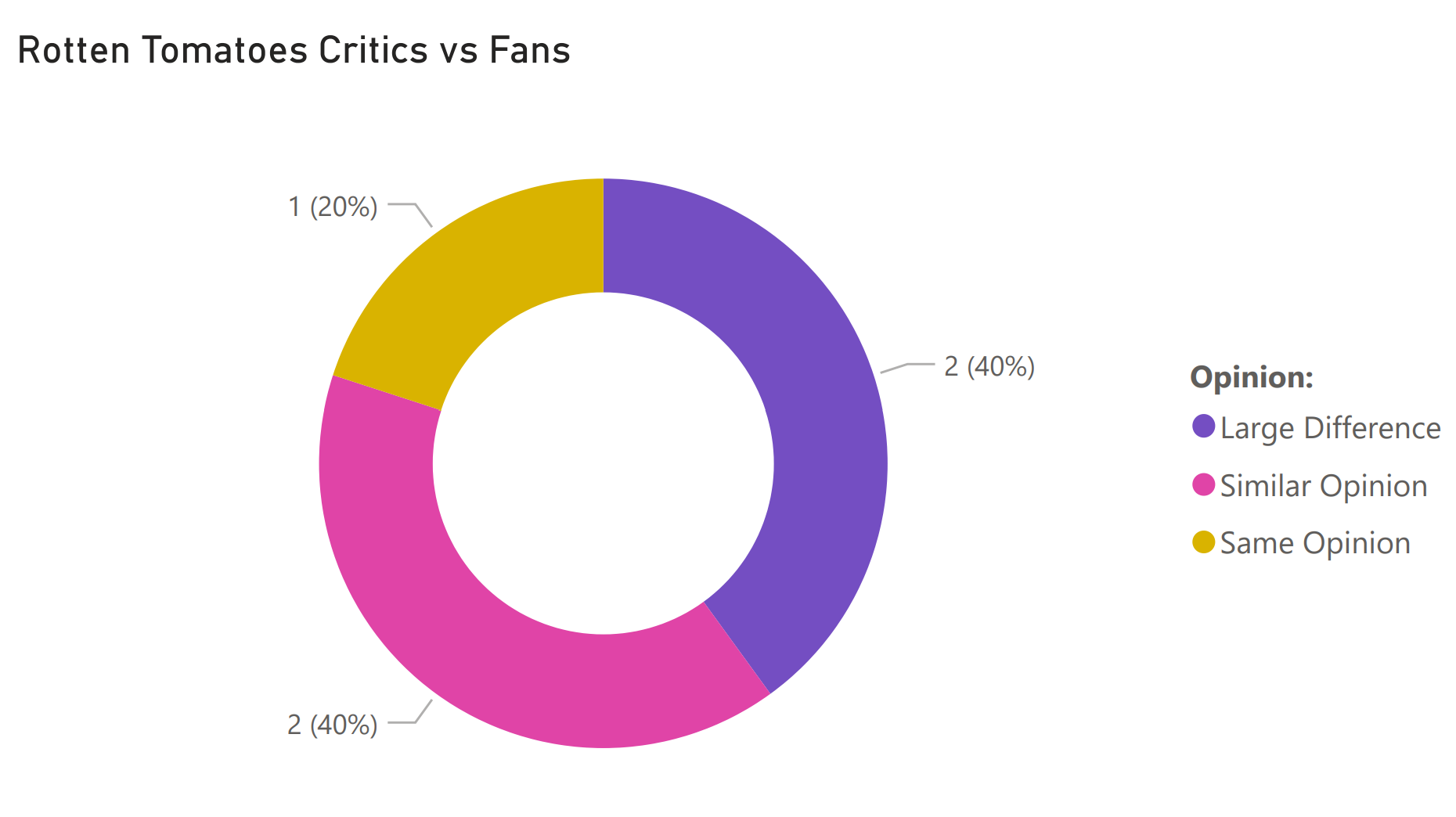 Rotten Tomatoes once again bringing the fire, and that sentence works because tomatoes are known for setting things ablaze. You’ll see that while there are no small differences, there are two large differences! This is the result that we’ve come to appreciate with this website. Let’s just break it down by film to see what movies are bringing the pain. A lot of things are being brought this time, apparently. 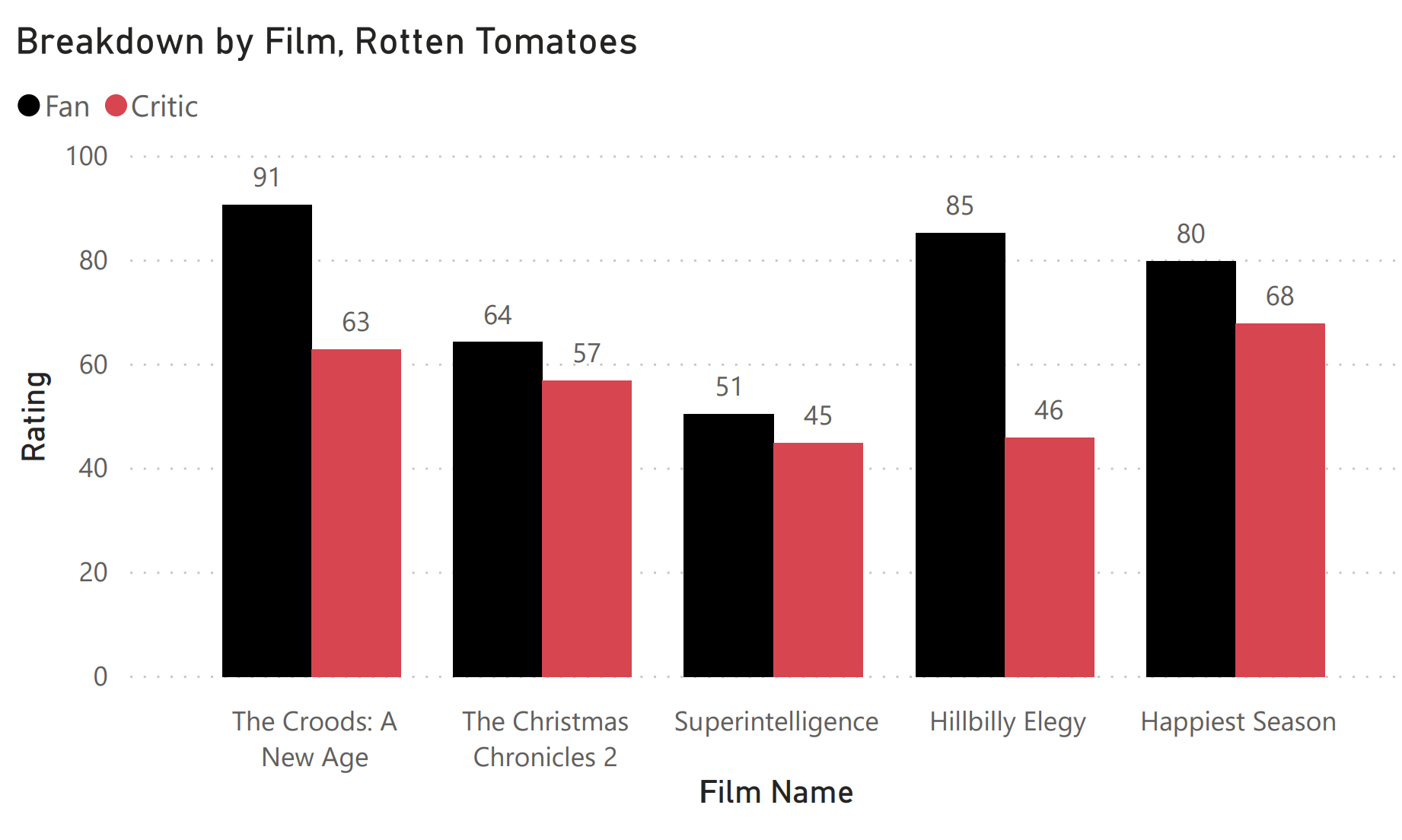 What I mean by that is not that it artificially inflates anything. Rotten Tomatoes aggregates their critical scores different than Metacritic, and I don’t know what’s going on with the audience there but they’re a more rebellious bunch. I imagine it’s because Rotten Tomatoes is the more mainstream option so it attracts a different breed–such as more casual movie-goers–than IMDB, but I could be completely off base. Either way, the people who frequent Rotten Tomatoes are my people. Solidarity.

IMDB: In this age with inclusion is of the utmost importance we have IMDB/Metacritic over here giving everyone a fair shake. I can’t remember if this has happened since I began doing this, but it seems unlikely considering we don’t always have four movies in the analysis.

Rotten Tomatoes: Meanwhile over in the other corner we got Rotten Tomatoes being a little hesitant in bringing everyone on board. On the plus side, I appreciate that fiery rage that burns over there this week.

The Final Verdict: Rotten Tomatoes popped off a bit this week. There was still some pleasantry to be had over there but it’s one of the more exciting weeks in terms of movement/action. IMDB is the biggest story however simply because it’s so rare that this happens.

Oh hey, you’ve decided to stay. Pull up a chair, friend, and let’s get it on. I mean, let’s look at the numbers. Yeah.

When we get to this part of the article it’s important to note that the ratings don’t vary that much. It turns out that among different age groups, genders and countries that the average is generally similar. There are exceptions to that, of course, but in my experience this has been the case. What that means is, if you see an eight point difference from this point on that’s contextually significant, even though as a whole it wouldn’t be.

Until otherwise noted these charts will represent IMDB and Metacritic. Rotten Tomatoes comes at the end. Between males and females there’s a minor discrepancy regarding Superintelligence. Females like it more. As the table below the graphs indicates, more males rate it than females, but that’s almost always the case since IMDB skews male.

The <18 crowd always does this. The biggest differences can almost always be found between them and everybody else. This doesn’t confirm that teenagers are moody, recalcitrant people (but they are)–the variance comes almost exclusively from the fact that only a few of them get off TikTok long enough to rate movies. Fans prefer both the shortest movies and the longest, on average. So what am I supposed to do with that? Fans are incredibly impatient but also extremely patient. I kid, of course, because all of the movies fall within what we expect these days.

When you look at them as male/female or broken down by age groups the lines are basically on top of each other except for the teenagers who are weird. That’s right, come here to read me saying that teenagers are weird. That’s got some serious “Teenagers” by My Chemical Romance vibes.

Fans enjoy dramas more than critics, but of course, we know that’s because Hillbilly Elegy is a drama. I make huge generalizations here but week-to-week doesn’t really tell us anything meaningful. It’s just fun for me to say that CRITICS HATE DRAMAS! especially since critics get a reputation for being stuffy losers who gravitate towards serious Oscar dramas. 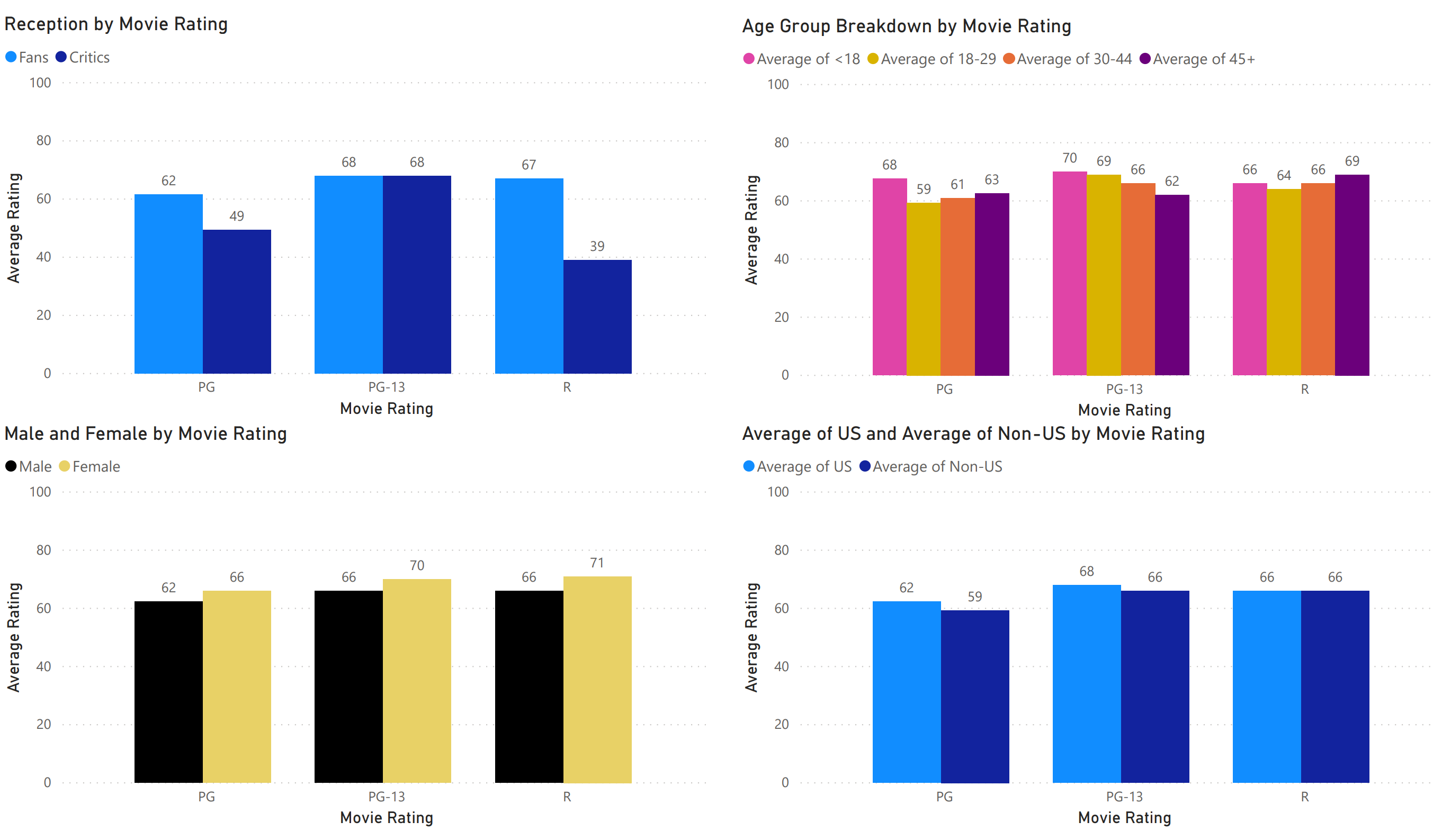 If you direct your beautiful eyes–am I flirting with all of my readers?–towards the “Reception by Movie Rating” bar graph, you’ll see that critics aren’t mature enough to handle R-rated films. They’re a bunch of children. They also can’t handle PG movies! What wimps! Thank God that fans are such sophisticated people.

Besides that, there’s not a whole lot worth commenting on. Let’s close the charts out with Rotten Tomatoes. 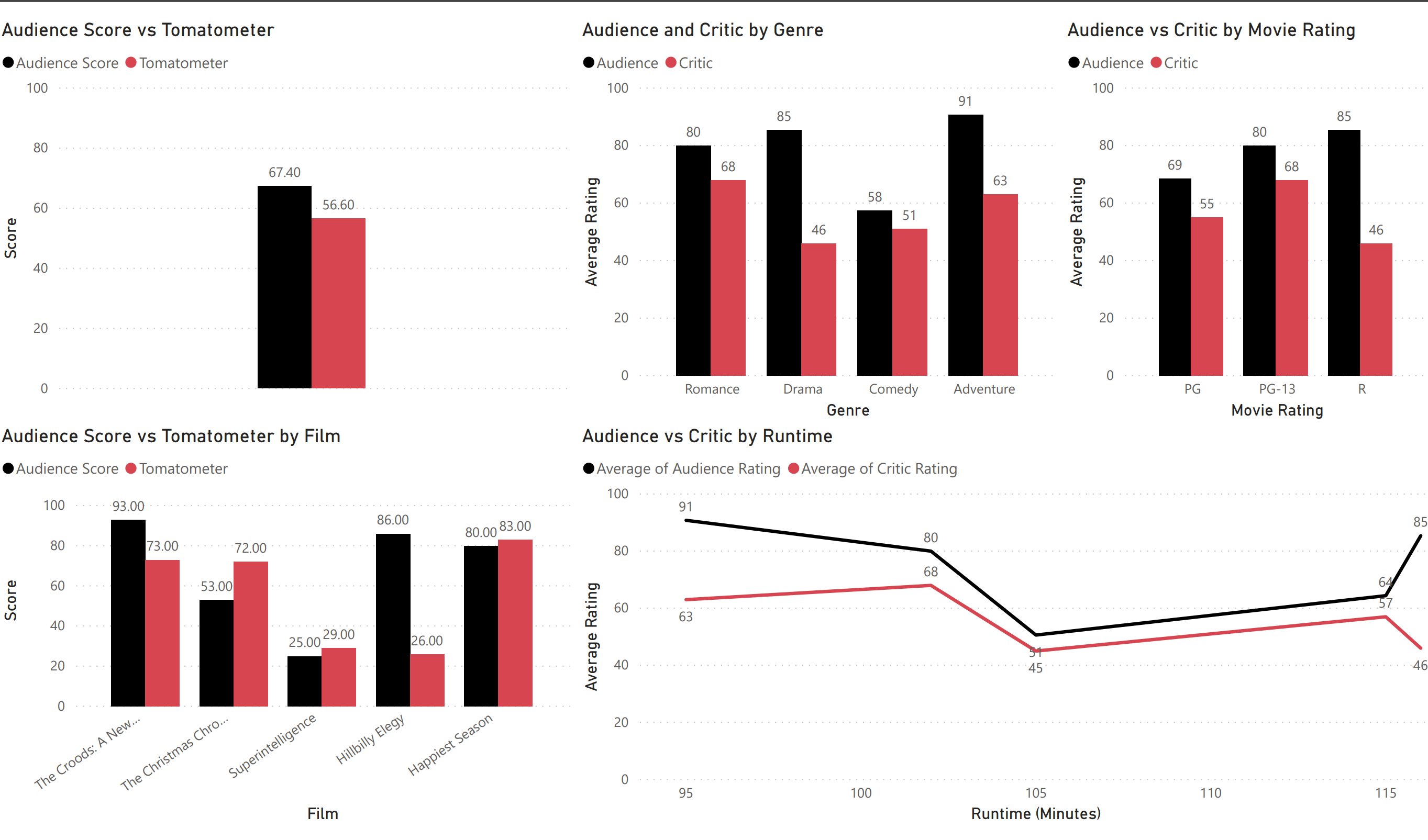 “Audience Score vs Tomatometer” generally gives us interesting results, but the Audience Score and Tomatometer are pretty similar this time around. However, if you look at the group of bars right below it, broken down by film, you’ll see that there’s some discord. The main instigator is Hillbilly Elegy, and the outcome can only be described as gigantic. Look at the average rating and how they differ. Damn, the audience rates Hillbilly Elegy highly.

Did I say that the audience rates the movie highly? That’s right, folks, I made a common mistake (okay, intentionally but still) regarding how I interpreted the Tomatometer! But Tyler, why is this wrong?

Rotten Tomatoes will often plaster their Tomatometer score all over the place to say how great a movie is, but all it does is tell you what percentage of critics give the film a passing grade. The same can be said regarding the audience and the Audience Score. What this means is that a movie like Saw II (chosen only because I think it’s completely mediocre) could manage a Tomatometer score of 100% if all the critics gave it a mild pass. Imagine the headline: Saw II the next Citizen Kane? They have so much in common.

I include the Tomatometer and Audience Score because they’re crucial to the identity of the website, and it’s pretty entertaining see how it unfolds anyway. It’s often the most lively part of the conversation because as you can see, the way the actual average ratings stack up is pretty similar to IMDB and Metacritic.

Critics hate dramas and movies that are too adult for them. Fans are the heroes of the day. You know, a totally unbiased observation on my end that couldn’t possibly be debunked easily. But before you attempt to debate me, consider that I am also technically a critic since I review movies on this website and I am ridiculously childish. Cognitive dissonance.

This wraps up by looking at the tally. I’ve been doing this consistently since September, outside of a brief hiatus, and this is how it looks. Large differences are more typical on Rotten Tomatoes while having the same opinion is prevalent on IMDB/Metacritic.

By and large, on both websites, having a similar opinion is the most predictable conclusion. What I constantly find intriguing is that when it comes to small differences, they are rather uncommon. On IMDB the small and large differences are comparable, but that doesn’t change the fact that on both websites there are few small differences. People are willing to agree wholeheartedly or disagree vehemently, but a smaller portion are having more modest conflicts. Polarization, indeed.

That brings another edition of Fans vs Critics: Friday Feud to a close. As always, I hope you enjoyed it. If you notice something with the charts that I didn’t comment on, feel free to tell me below. Make up your own stories and explanations; that’s the fun of doing this. See you next time.

The readers: you think we’re going to come here again?

He hasn’t read Hillbilly Elegy nor seen the movie.