Friday Feud: The White Tiger, The Wanting Mare, The Reason I Jump, The Marksman, The Little Things, Some Kind of Heaven, Saint Maud, Run Hide Fight, Penguin Bloom, Outside the Wire, Our Friend, One Night in Miami, No Man’s Land, Malcolm & Marie, Locked Down, Little Fish, Falling, Earwig and the Witch and Bliss.

Click here to read a disclaimer that gives me information on what exactly I’m doing with these Fans vs Critics articles. I link to the disclaimer every week so I don’t have to detail everything and bore returning visitors.

It’s been a long time since there’s been a Fans vs Critics article, hasn’t it? I won’t make any excuses: I went on a hiatus for quite some time. But don’t worry, because now I’m back. And not only have the flames of war been reignited, they will burn even hotter this week! That’s because I’m making up for lost time by including nineteen movies. If you were to count those with your fingers that would almost be four whole hands! And if you could do that you’d be an alien!

IMDB allows users to submit scores and links to Metacritic for the critical reception so I combine the two. Rotten Tomatoes aggregates critical scores and audience scores so it is self-sufficient and I compare them directly.

I have made some changes during my hiatus. If you’re checked out what I’ve done in the past then many of these graphs will look familiar to you, because I input the relevant numbers and just reuse them each week. But I’ve decided to speed up the process and shorten these articles by not including so many pages of graphs. I did this partially because most of the time there isn’t anything that remarkable going on to comment on, so I felt like I was forcing myself.

This also means that I don’t really look at elements like runtime or genre anymore, because ultimately it was meaningless and just took up more of my time. If this was an analysis over a greater period of time than those factors would have been important but considering each genre is generally only represented by one or two films each week, it’s really not that relevant. I also figured a shorter article will be more appealing to the casual viewer.

I’ve also decided to not adhere to a strict weekly schedule. It could be bi-weekly but I’m also considering doing it monthly so when I do there’s more flicks to look at. More films in an analysis provides more interesting results. With that said, if it’s monthly the articles might not be shorter–there will just be fewer of them. Let me know in the comments what you would like to see. If there’s demand I will do it more frequently.

The last point I want to make is that if something provocative arises with any of the movies each week I will do a slightly deeper dive into it. For example, this week I will focus a bit more on Run Hide Fight, the film released by The Daily Wire. This isn’t because I’m a conservative (I’m not), but because the reactions were fascinating.

As always, I try to do this with a sense of humour and occasionally make sweeping accusations for the sake of comedy–so don’t take this too seriously and let’s have some fun with it.

On IMDB and Metacritic, Run Hide Fight Causes a Fight 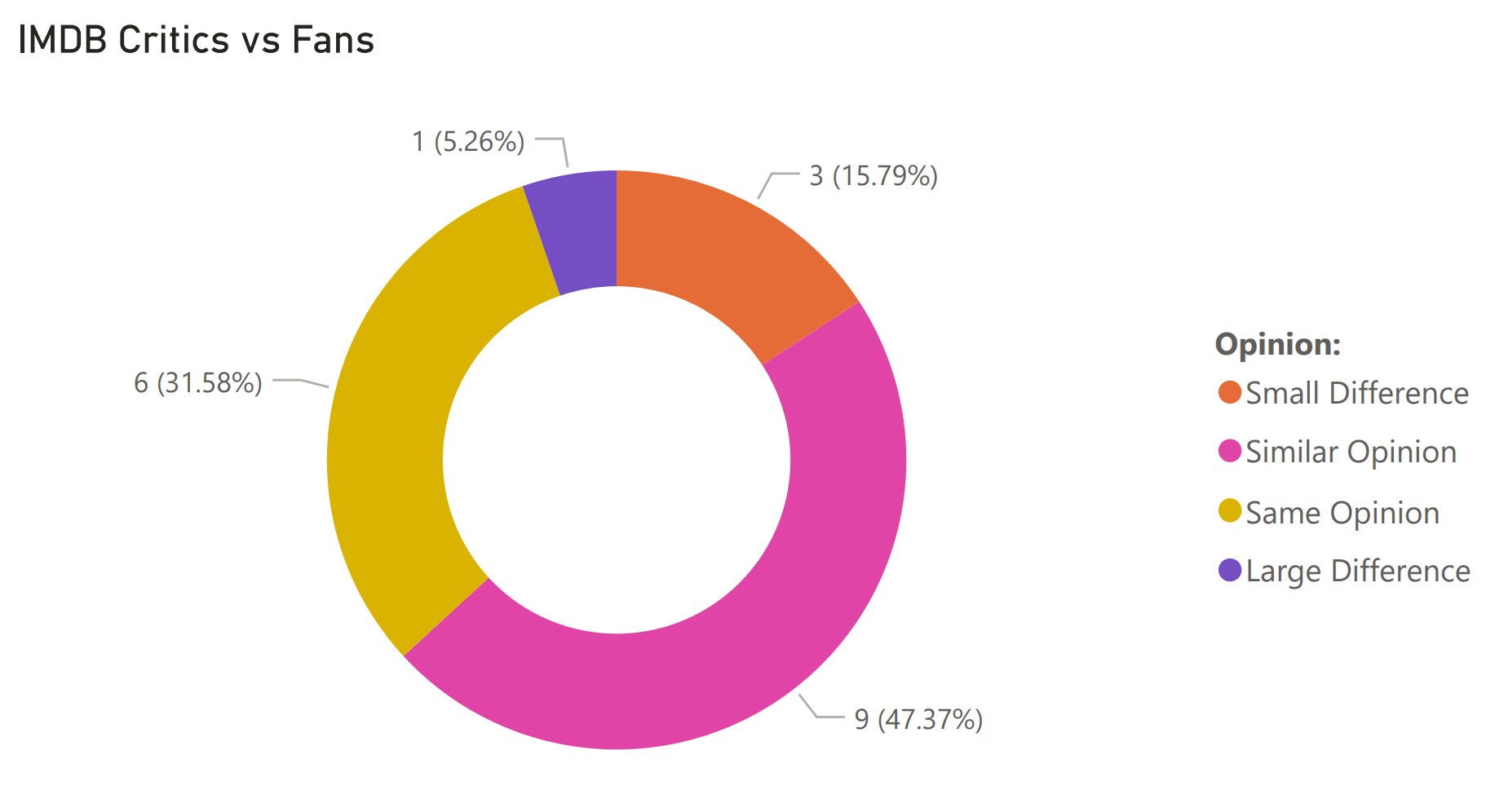 According to my scale, critics and fans–on Metacritic and IMDB, respectively–either have a similar opinion or the same opinion more often than not. This is in tune with the general trend, and it doesn’t appear that anybody is going to buck it anytime soon.

Strangely enough, seeing more small differences than large differences is actually a little surprising because historically that hasn’t been the case. So how does it pan out when we break it down by film? Get ready for a messy chart!

Well, we found the culprit for the single large difference, sandwiched right between Saint Maud and Penguin Bloom–two films that couldn’t be any different–is Run Hide Fight. That’s right my liberal leaning critic buddies, we can blame Ben Shapiro and The Daily Wire! Uh, but also, that’s right my conservative leaning fan buddies, we can blame the liberal leaning media! In all seriousness, I’m going to return to the scene of the crime with Run Hide Fight later on, once we’ve looked at Rotten Tomatoes.

Since I mentioned small differences being a rarity, the films that occupy that space are The Marksman (fans still like them some mediocre Liam Neeson flicks), Our Friend (ironic considering the title mentions friendship) and Bliss (no bliss here). Saint Maud and Penguin Bloom come dangerously close.

If this is a monthly thing I will likely also include the average ratings for both groups, just to see if they match or flirt with each other at least. Perhaps not surprisingly, the IMDB users don’t quite line up with the critics, as aggregated by Metacritic. It’s not a huge disparity but it’s noticeable. Since I began this, Rotten Tomatoes has always proven to be more volatile–which I dig, because it’s more fun to write about fighting than it is people getting along. Oh, don’t look at me like that, we know that conflict sells.

Now if somebody could just give me money…

People still largely agree on Rotten Tomatoes but as you can see, there are more large differences. The small difference is more rare this time on the great Tomato, so that’s in line with previous results as well. Now we see where all the action is.

As per the averages, the gap between fans and critics is larger. I’m not surprised between Rotten Tomatoes is more thrilling–if you count looking at numbers as thrilling. It’s almost ten points, which I think is getting to the point of being fairly significant. In the scale that I’ve used to determine how their opinions align ten points is considered a similar opinion, but that’s based on a single comparison. Over time, with nineteen (or more) films, a ten point differential becomes more important.

It’s nice to see that fans and critics are the same–within five points–on The Reason I Jump, a film that wasn’t perfect but tackles autism. I am a little annoyed that people don’t like Falling more, but at least they like it. And since they feel the same we can’t throw accusations of homophobia at them! I’m sure people still do.

The films with the biggest difference of opinion are The Marksman (again), Outside the Wire (huh), Earwig and the Witch and Run Hide Fight. Penguin Bloom became a small difference on Rotten Tomatoes and the two groups both almost dislike Locked Down, which it deserves.

I learned something about the Tomatometer last month. All this time I’ve been ranting about it, telling you people how it’s just a tool to showcase what percentage of critics–and in the case of the Audience Score, the fans–give a film a passing grade. It’s not that a flick with a 90% Tomatometer score is actually a 9/10 film; 90% of the critics might have only have given it a mediocre review, but that counts as a pass.

But what did I learn? All this time I foolishly thought that a passing grade was 50% (well, 51% technically), because that would make too much sense. It turns out that ya boy made a rookie mistake! You need to reach a 60% to not get a splatter beside your movie. Duh, obviously.

But anyway, here are some more charts. 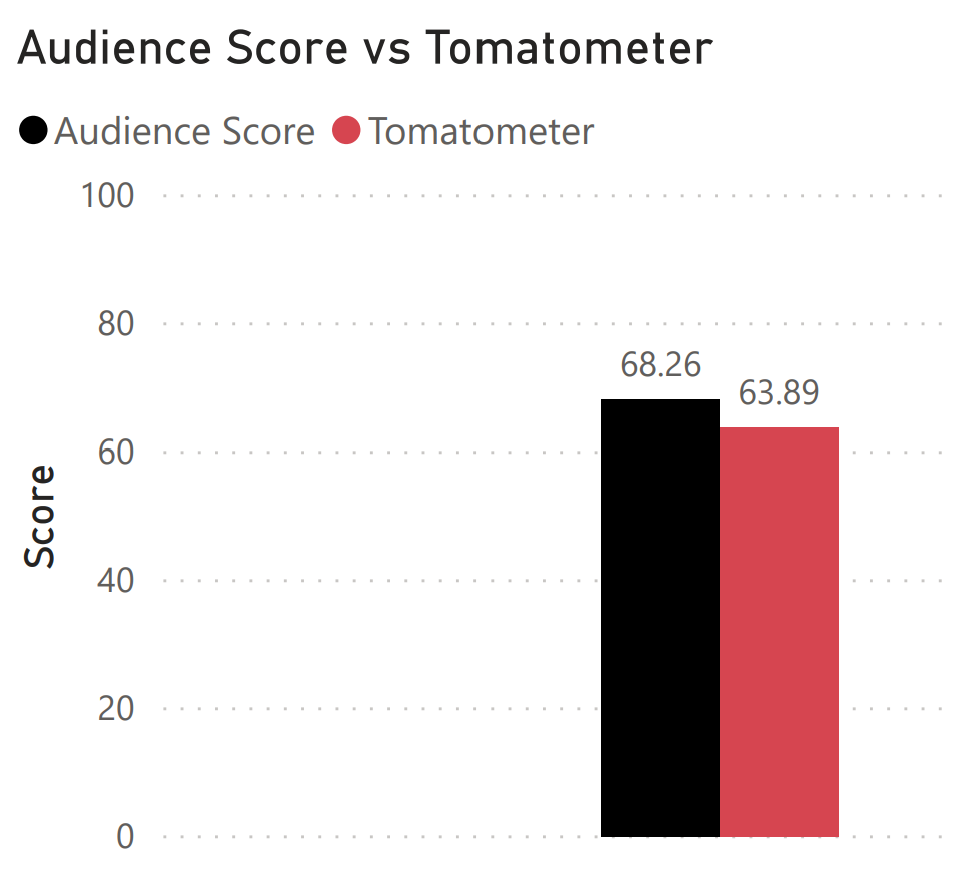 On average, the reception for movies is positive! That doesn’t mean that every movie gets a passing grade but what this means is that fans and critics, on average, give films a pass. But how does shake up on a more granular level? Oh, I dunno, I just happen to have a graph for this occasion… no big deal or nuttin’.

I’m not sure why I featured the averages again. That’s pretty redundant. No, your face is redundant! Ugh, why do they let me write? Oh yeah, because I own the site, that’s why.

So, if you look at the Tomatometer there are quite a few flicks that are considered rotten, contrary to good sense. The fans are a lot more forgiving, especially towards Run Hide Fight, which–

While I’ve abandoned breaking every film down by age group, sex/gender and country, I wanted to see how Run Hide Fight looked when those elements are factored in. There are some intriguing points within the results.

When broken down by age group there’s not much to discuss. One might think, based on folk wisdom, that the 45+ group might rate it higher due to the conservative bias in the company that released it–not the movie itself, which I didn’t think screamed towards the right too much. It’s gone around that people get more conservative as they age but there’s also been studies to debunk that. The theory still gets around so it’s worth mentioning.

Males and females differ slightly but not by that much, but it appears to be a more American movie than anything else. A nine point difference between US and non-US is rather large, honestly.

However, it gets more remarkable once you go further right to the MC ratings and the like. MC means Metacritic, in case you’re wondering. I don’t use the Metacritic user score here because I don’t like it and there aren’t usually that many ratings, at least compared to Rotten Tomatoes and IMDB. But I featured it here because of how much the users loved the movie, compared to the critics!

As we already know, the disparity between the Tomatometer and the Audience Score is gigantic. But I clicked to see what the top critics thought. 0? Holy. No top critics would recommend Run Hide Fight, but 93% of the audience would! This kind of thing is why people think fans and critics don’t get along.

So what can we garner from this? Honestly, it depends on where you fall and how much you’re willing to project political bias. Could it just be that fans and critics don’t see eye to eye on Die Hard in a high school? Or could it be some mainstream conspiracy against conservative media? But you want to know my opinion, you say? Here it is: Thomas Jane is in this and he was good Punisher but I prefer Jon Bernthal. Topic officially avoided.

Here you have it, how this has unfolded since I birthed this back in September, 2020. The fans that visit IMDB overwhelmingly agree with the critics, as aggregated by Metacritic. It’s about the same when you wander over to Rotten Tomatoes, as well.

But I have to be honest, I adore the tally at this exact moment. I love how the similar opinions and small differences have completely leveled out, leaving only the extremities to tell the tale. I don’t know how many visitors each website gets, but it appears that Rotten Tomatoes gets more mainstream attention. So if you look at how there’s almost as many same opinions as there are large differences, it provides ammunition (somewhat) for the people that say fans and critics are at each other’s throats.

Well, that’s it for the triumphant return of Fans vs Critics. I hope you enjoyed it, and I will see you next time!

He visits The Daily Bun.