Friday Feud: Wonder Woman 1984, Soul, Shadow in the Cloud, Promising Young Woman, News of the World and The Midnight Sky.

Click here to read the disclaimer for Fans vs Critics in order to get a better explanation about how I determine certain things, such as what qualifies as a large difference of opinion. I link to a disclaimer each week in order to save time for those returning readers who don’t want to trudge through the same explanations every week.

After a little bit of time off I have returned with another edition of Fans vs Critics, the weekly series that finds me awkwardly attempting to answer the most important question in the cinematic world: do fans and critics agree?

If you’re new here you may be wondering how I do that! Well, I take some movies that were released a few weeks ago–in order to give the audience time to rate them–and I compare the ratings across IMDB, Metacritic and Rotten Tomatoes. IMDB represents the audience and since IMDB links to Metacritic for the critical reception I directly compare the two, whereas Rotten Tomatoes has both critic and audience reception so I can just compare the two from their very own website.

Does taking the initial response from freshly released movies answer the question? No, of course not, but since so many websites–including my own–deal in discussing movies as they release, I figure it’s an interesting experiment. A longer term analysis definitely does a more suitable job of answering the question over time, but I think there is merit–and entertainment–in what I’m doing here.

We will get to the show shortly but I just want to iterate that while there are graphs and charts splattered all over the page, I do try to make this as amusing and silly as possible. There’s some legitimate analysis here but I also understand that just looking at numbers can be boring to most people. With that said, a certain level of dryness should be expected. Enjoy the show! 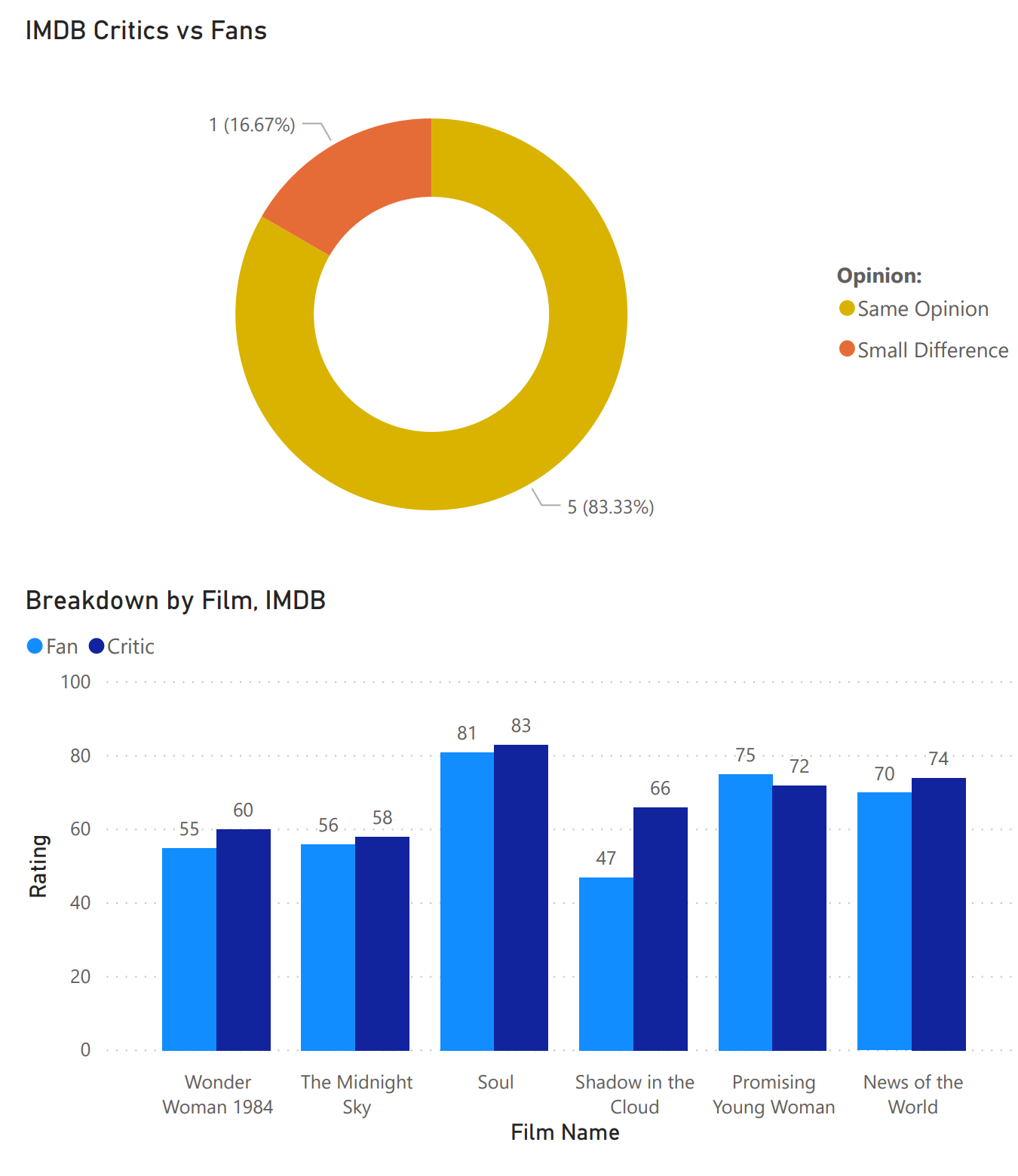 The users of IMDB and the critics counted by Metacritic have a history of agreeing more often than not, which you will see at the end of the article when I post up the tally. However, there is a rarity present this week! We don’t see a lot of small differences between the two.

Shadow in the Cloud–a movie I gave a quick review to and didn’t like–is the culprit this week. It’s almost a large difference according to my scale but what’s interesting is how it calls to attention how flawed my system is. Numerically I classify it as a small difference but when you look at what the numbers actually are you’ll see that the fans/audience don’t actually give it a passing grade whereas critics do. In my eyes that is actually a large difference because it’s a night and day type of deal. This is why you always break things down! I don’t know why I’m telling you this; I’m not a statistician or even remotely smart. We got entry level chart reading going on here, folks!

One thing before I move onto Rotten Tomatoes… I wonder how much of the dislike for Shadow in the Cloud is because Max Landis wrote it? 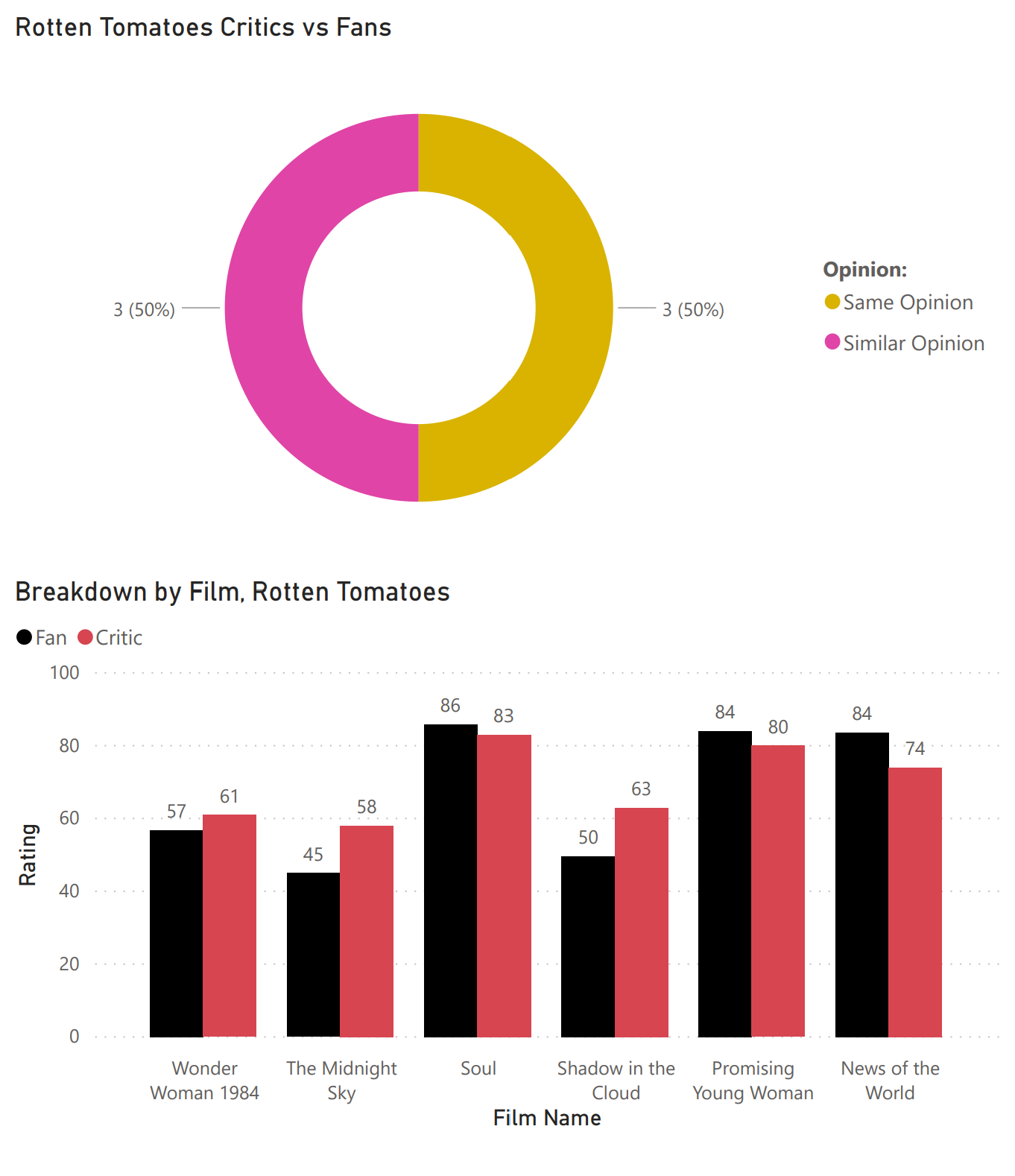 It’s also uncommon for Rotten Tomatoes to have less disagreement than IMDB! Turns out that it’s a love fest over there. Or is it?

Once again the numbers are taking a dump on my methods. Shadow in the Cloud teeters on the precipice but The Midnight Sky is actually disliked by the audience on average and recommended by critics… if you consider 50 a passing grade like I do. These kinds of things add a caveat to my final tally but I keep it simplistic and don’t account for it. To be honest, it’s been rather unusual for that to happen anyway. IMDB: Fans and critics to quarrel much weekly but this week there is a small fight between them on one particular movie.

Rotten Tomatoes: Rotten Tomatoes is incredibly agreeable numerically but when you dig into the numbers a little bit then you find that with The Midnight Sky there should realistically be a disagreement. It’s still basically a solid relationship between the two groups over there, however.

The Final Verdict: When you factor in how this week has broken my scale–I will rebuild!–then it’s a mildly entertaining week, but for the most part if you want controversy you won’t find it here. I thought Wonder Woman 1984 would play a bigger role, to be honest. Wait, what’s this…?

As Is Always the Case, You Could Leave Now and Live a Prosperous Life… or You Could Finish Reading This Ridiculously Long Subheader and Then Watch as I Break Down the Numbers in More Detail

Now is the time where I look at how the numbers unfold in terms of demographics and other factors. If you want to see how things break down by gender, age group, etc. then stick around. Until otherwise noted all of these charts are about IMDB/Metacritic, but at the end there is also a page of Rotten Tomatoes graphs. 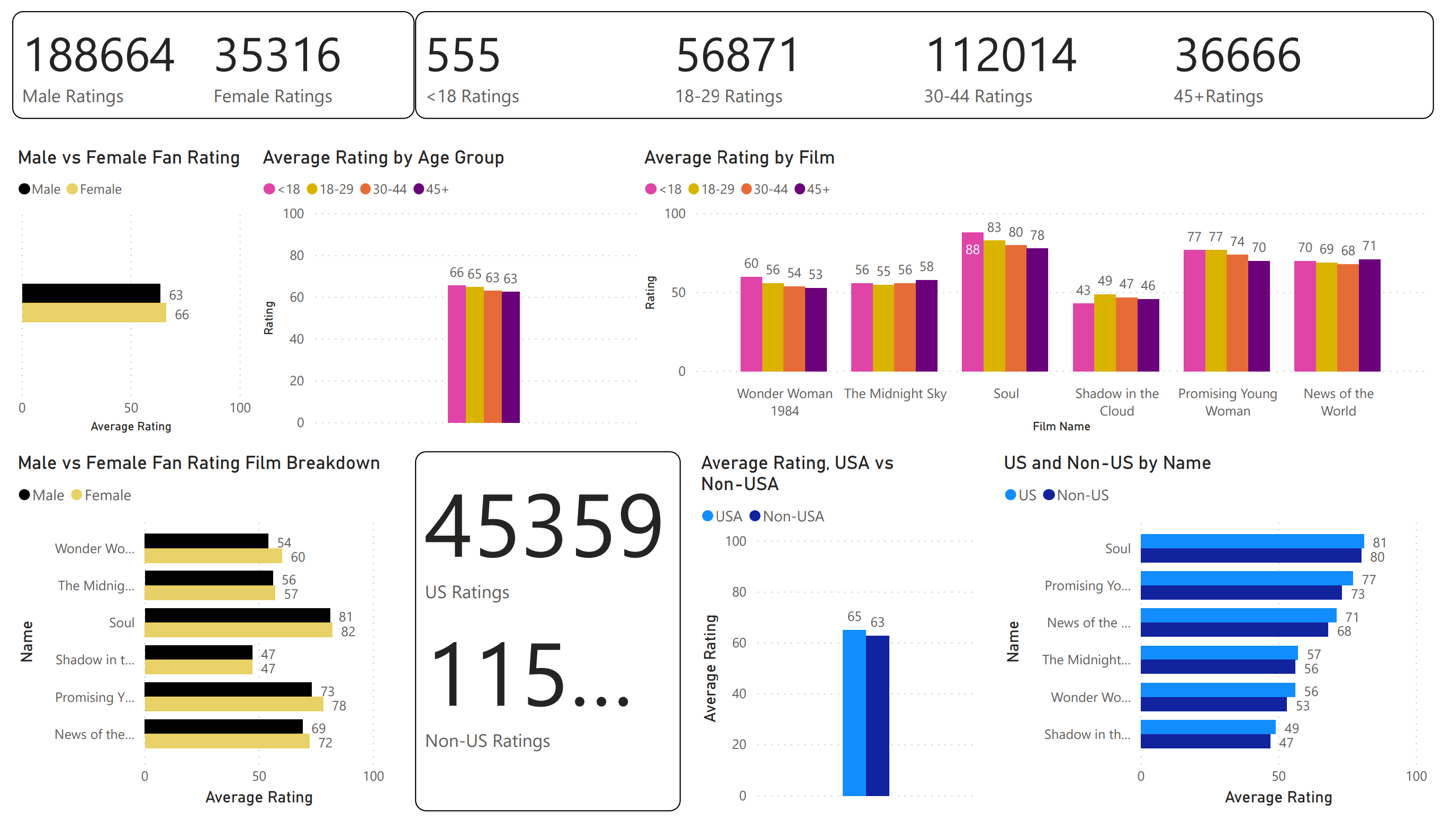 The number of ratings for each demographic.

There’s something that I’m going to mention because I know somebody would point it out anyway. This will come up in conversation because I’ve already seen these conversations happen, especially when Wonder Woman was released in 2017. In the chart titled “Male vs Female Fan Rating Film Breakdown” you will see that, yes, males rate both Wonder Woman 1984 and Promising Young Woman lower than females. There’s a couple things I would like to point out regarding this.

When broken down like this the numbers don’t generally vary that much. I wouldn’t say that a six point difference with Wonder Woman 1984 is that significant in the grand scheme of things, but when you consider that males, females, US users, non-US users and the different age groups really don’t differ much it’s a little more impactful. I know, it’s weird.

But you want to talk about sexism so let’s talk about sexism! Both Wonder Woman 1984 and Promising Young Woman feature strong lady protagonists, and men rate them lower. Look, the difference between the two sexes is not that vast and could it be that some men are insecure? Sure, but it could also be that some men just don’t relate to a female heroine, or perhaps they don’t like the agendas that they perceive these films to be pushing. I’m not saying any of this is right or wrong, but let’s not just shout down half of the population (it will hurt my feelings). You’ll also notice that the women rate almost everything higher.

One time I just did a cursory look at other superhero movies such as Iron Man, Thor and Captain America. I noticed that women rated movies like Captain Marvel and Wonder Woman higher (duh) but they also seemed to enjoy the movies featuring men more as well.

But let’s just all get along. We need each other. That’s what Gal Gadot would want. 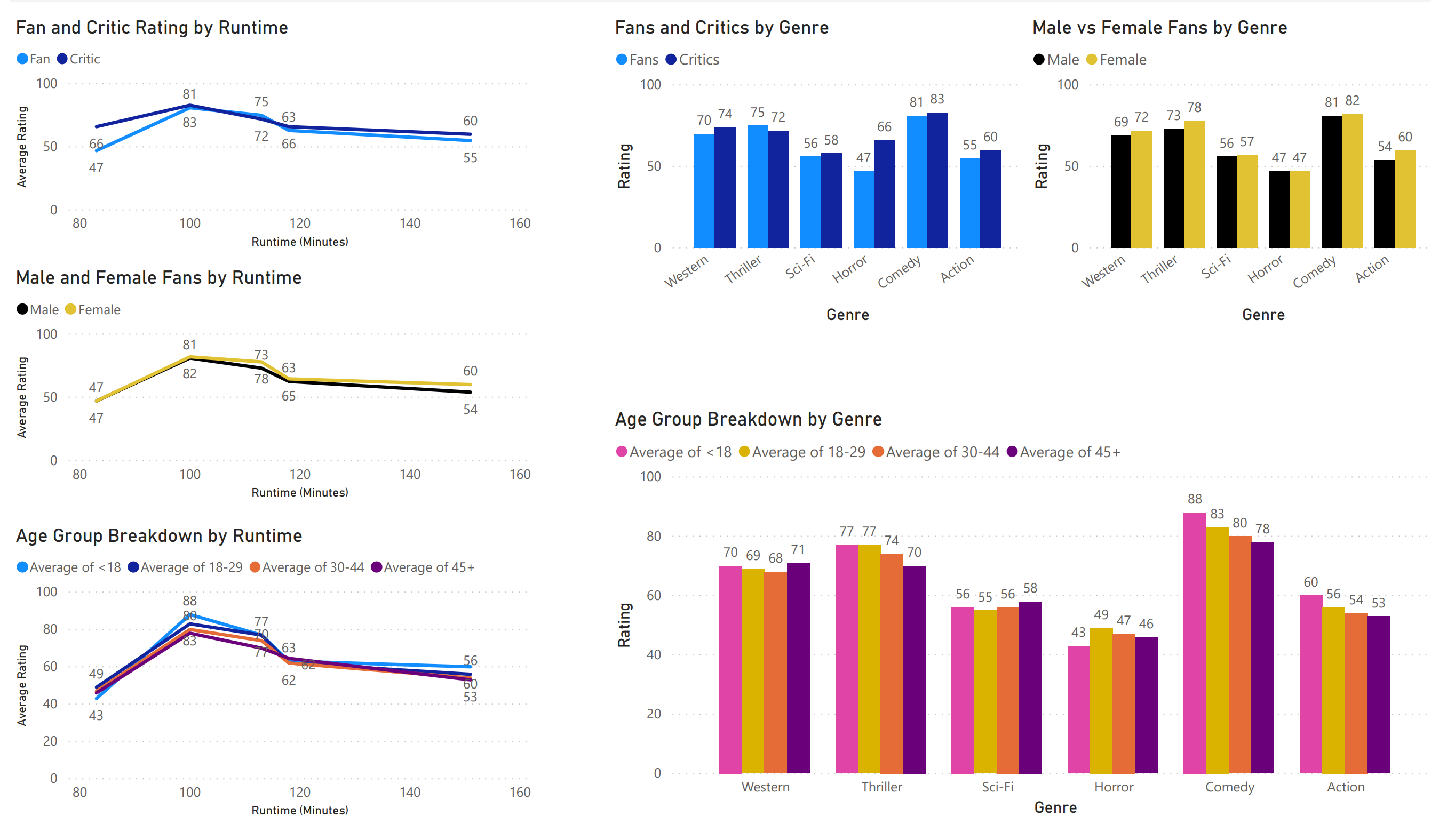 This will be short because there’s very little that jumps out at me. Females break the stereotype when it comes to genres by preferring action movies rather than men, but that’s because Wonder Woman 1984 was classified as action (yes, I know it doesn’t have that many fight scenes).

It’s worth pointing out that critics enjoyed the horror film more than the fans did. But there was only one horror film released so that’s hardly representative of a larger scheme. I only include this because I thought it might be of interest to some people. If you’ve been here before you know what is coming. Frankly, the Tomatometer might be one of the most misleading–or at least misunderstood–concepts in film and film criticism. As my friend elegantly put it on Twitter, “The Rotten Tomatoes Tomatometer is why I have trust issues.”

Come with me for a moment, picture the scene. You just released a movie and you are frantically checking websites to see what critics think. You’re nervous and want your efforts to be appreciated. Then you stumble across Rotten Tomatoes and you notice that the critical aggregation gives it a whopping 100% on the Tomatometer! Your movie is a masterpiece! It’s perfect! Who would have thought that your unassuming tale of a writer–who periodically constructs articles about fans and critics–and his bunny would join the ranks of Citizen Kane, The Maltese Falcon, Modern Times, Rebecca, Seven Samurai, Singin’ in the Rain and Creep 2. Wait… what?

Then you start wondering to yourself, surely Creepy 2 can’t be a 10/10. Your hunch would be correct because as of writing this the average critical rating is 7.6/10. Respectable, but not Kurosawa. What’s going on with the Tomatometer?

I’m going to be blunt, kids. The Tomatometer kind of sucks. It’s fun and it provides me with entertainment, but unless you fully understand what it’s trying to say it’s just a manipulative tool. Basically, the Tomatometer is just the percentage of critics that give it a passing grade. I’ve actually been incorrect every time I’ve rallied against it because I just learned that it’s even worse. Rotten Tomatoes considers a passing grade–“fresh”–to be 60%, not 50% as I originally thought. I’ve been operating under the assumption that they at least made that level of sense. Nope. By the way, the Audience Score is similar but nobody seems to care about it. Screw the people, I guess?

With that said, I still enjoy focusing on it. Look at “Audience Score vs Tomatometer by Film” and see how many movies the audience just don’t recommend on average. They don’t recommend Wonder Woman 1984, The Midnight Sky or Shadow in the Cloud, but then on the completely opposite side of the spectrum they wholeheartedly recommend News of the World, Soul and Promising Young Woman.

The critics, on the other hand, are more forgiving in general, recommending on average that we see all of these movies. If you were to only look at this then you would think that the critics just love everything. Yet if you look at the “Audience Score vs Tomatometer” charts then it makes the case that both groups, on average, are positive about the movies. You can mislead people anyway you want!

If you learn anything from my nonsense today, just learn that while the Tomatometer has some utility, it is plastered all over the place because studios know that regular people with lives don’t care about what the scores actually mean.

As noted above, there’s a slight discrepancy between my scale and how the numbers unfold, but I still think that even when my method isn’t exactly perfect it’s still usable. It’s not a huge deal, is what I’m saying.

There’s still no chance that IMDB/Metacritic will ever drastically change, and they are overwhelmingly positive. Rotten Tomatoes still has a little fight in it but this week just added to the number of agreements they have, furthering the unity between fans and critics.

Even though the war seems to be going one way, there are still little battles scattered throughout. Fans and critics will never completely align with each other, but what we are finding is that they really don’t disagree as much as some outlets/people would have you believe.

He loved News of the World.