Click here for the disclaimer that explains how I determine certain things. I link to this disclaimer–and write these–every week so returning viewers don’t have to be bombarded with another lengthy explanation.

Hello and if it’s your first time here, welcome to Fans vs Critics: Friday Feud. What is this you ask? It’s a weekly series where I take a few movies that were released a few weeks ago and use resources such as IMDB, Metacritic and Rotten Tomatoes to figure out if fans and critics agree or disagree.

You may have some other questions. Let me answer some that you have since I am currently reading your mind, sicko. Why are the movies a few weeks old? I need to give the fans time to rate them, so even though the sample sizes are still small, I thought it would be interesting to see how fans and critics differ–or align–within the first few weeks of release. You could analyze the data of movies all across time and that would be legitimate, but this is meant to be serialized so we can learn as we go.

These articles are not meant to definitively answer the debate of whether these two groups of people agree or not. It’s meant to be fun, silly and a little informative. So let’s have a good time.

IMDB/Metacritic Is More Than Meets the Eye 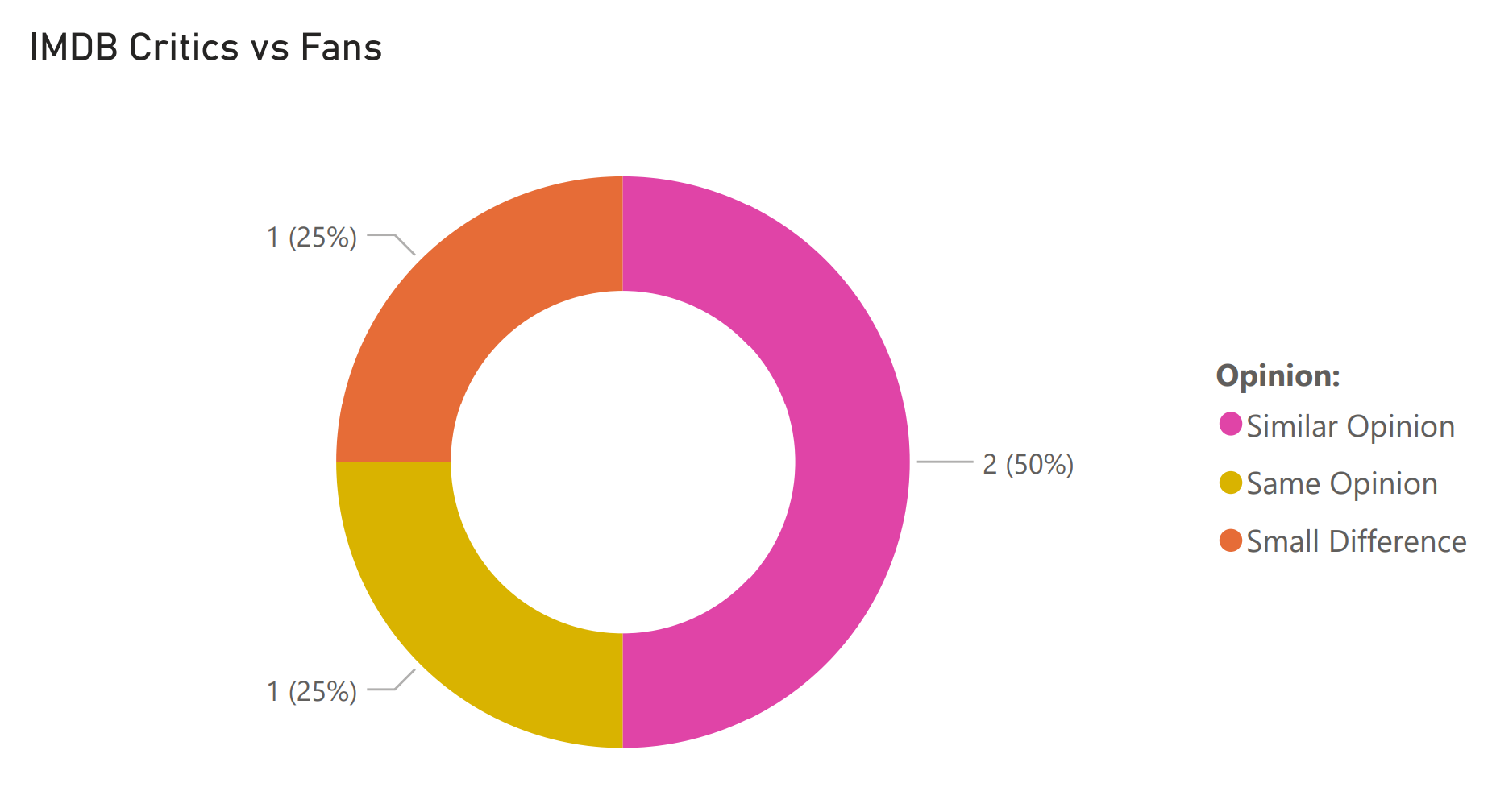 As is often the case, the critics–as counted by Metacritic–and the IMDB-goers are more alike than anything, although there is a small difference thrown in there for good measure. Does it matter? Yeah! We get very few small differences so this is exciting. Is it sad that I’m excited by that? I think so. Why am I thinking out loud? You don’t need to witness the existential crisis that’s currently brewing, so let’s look at how this spreads out. 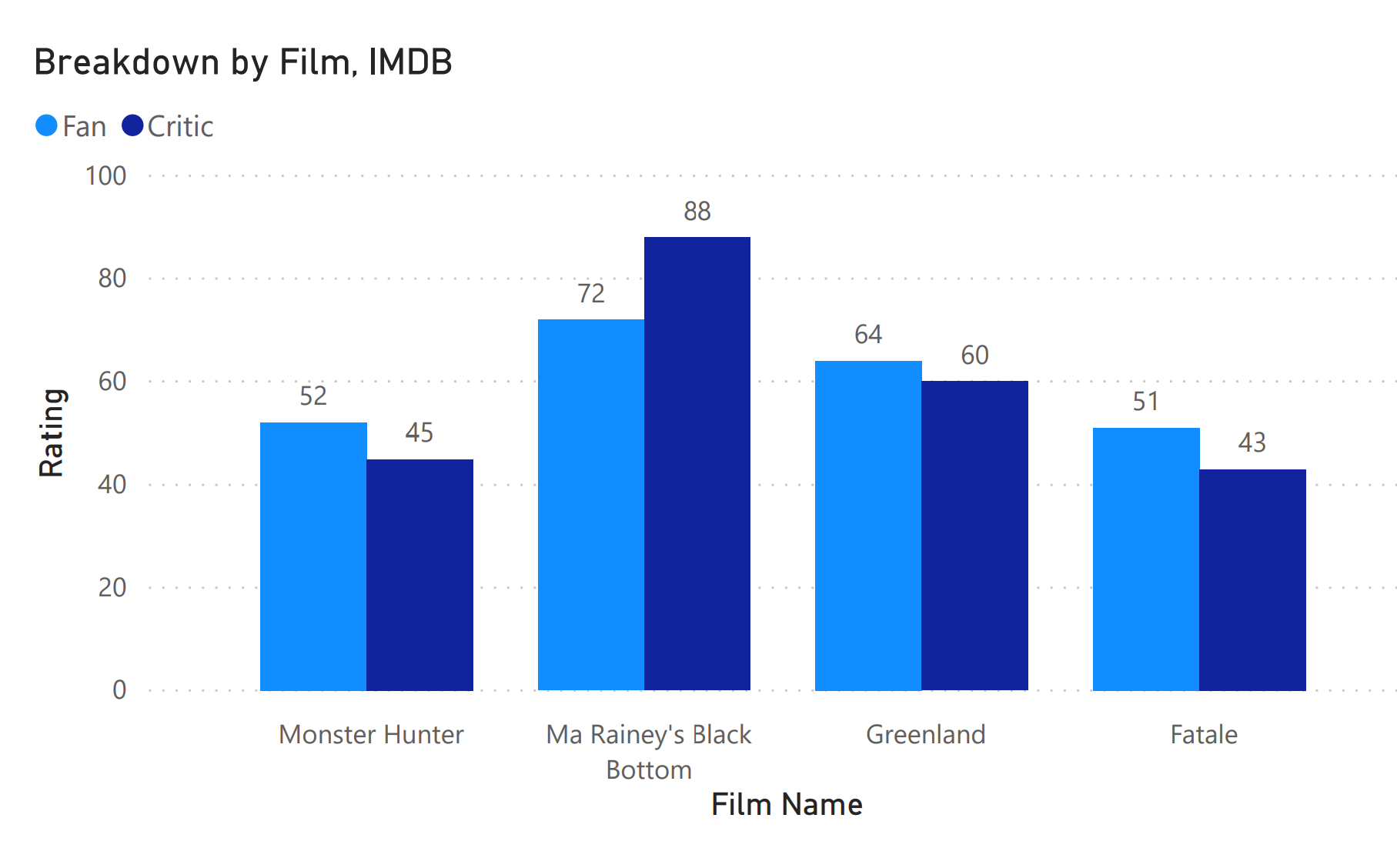 There are a few observations here. The first is that even though Monster Hunter and Fatale are technically both labeled “similar opinion” on my scale, if you consider 50 a passing grade then the critics actually fail them and the audience passes them.

The other point is that Ma Rainey’s Black Bottom is causing a bit of a riff, but both groups ultimately like it. I don’t look at these charts until I start writing this, so I’m going to make a prediction: on Rotten Tomatoes this difference will be larger.

Please let me be correct, I don’t want to suffer the wrath of mockery from the internet.

On Rotten Tomatoes I Get a Fool Made of Me 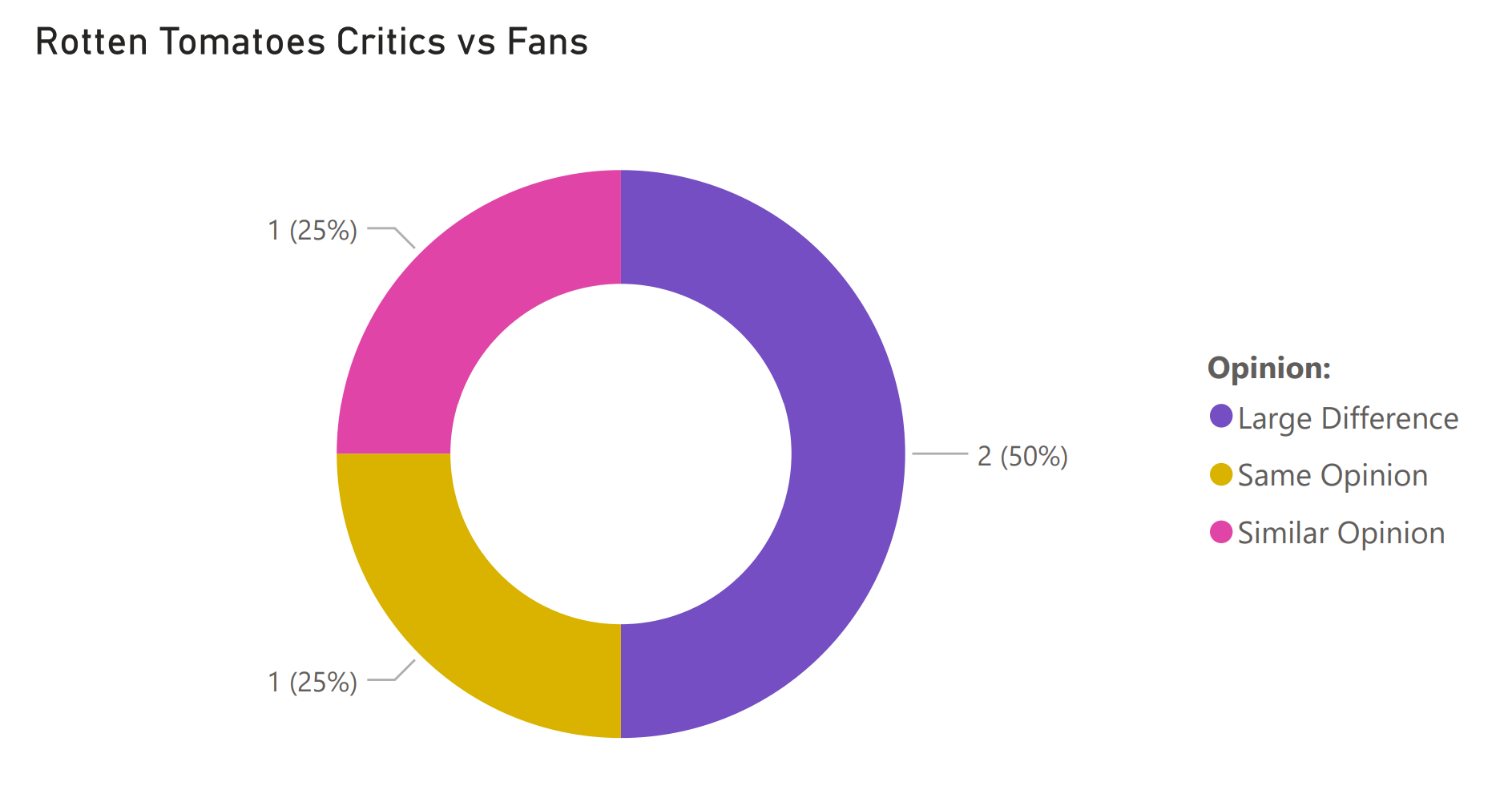 According to this there’s more negativity–meaning a dispute between the two groups–on Rotten Tomatoes than there is on IMDB. That’s not a surprise because it’s a warzone over there occasionally. Technically there are two agreements and two disagreements, but the oomph of the disagreements is larger than the oomph of the agreements since two large differences would be more impactful than a same opinion (the positive equivalent of a large difference) and a similar opinion (weaker).

That’s a lot of words just to say, cool, I want to watch a fight. 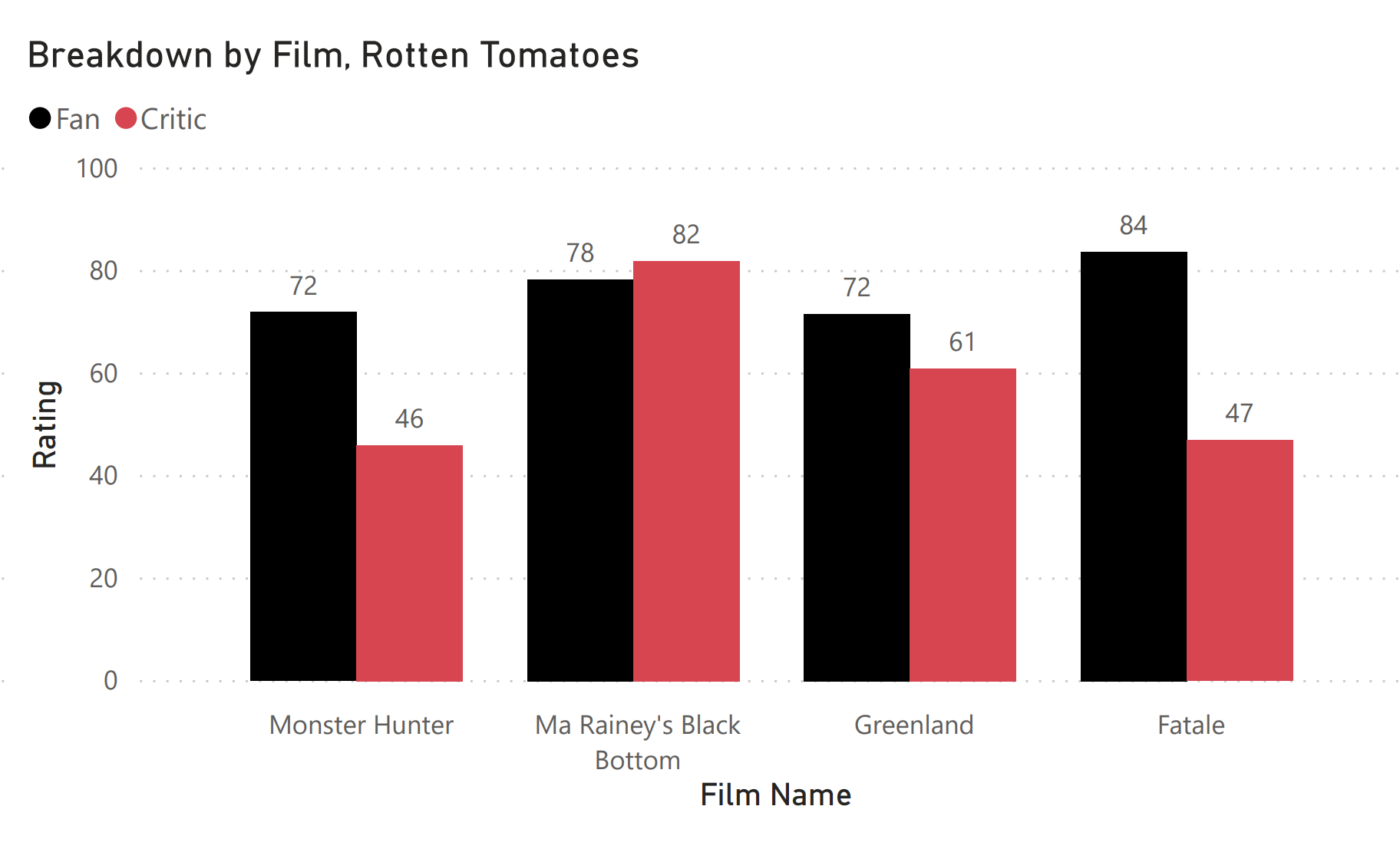 So um, how do I say this? I’m just going to be blunt. My statement about Ma Rainey’s Black Bottom and Rotten Tomatoes up above was wrong. Oh wait, what is this randomly popping up on your screen?

Seriously, I’m actually glad that they agree over there at The Tomato because I reviewed Ma Rainey’s Black Bottom and gave it a favourable review. I quite enjoy how this breaks down because not only are there large differences within the reception for Monster Hunter and Fatale but one group really enjoys the film and the other wouldn’t even recommend it, at least on average.

The only thing I can’t figure out is whether the audience for Monster Hunter are gamers or non-gamers? You would think gamers since it’s a game property but gamers are angry people. I would know since I am one, contrary to what you definitely believe is my cheery demeanor.

If you’re the fans that are signed up to Rotten Tomatoes, it’s a pretty good week for movies. Critics are a tad miserable but at least Netflix had a hit.

IMDB: Fans and critics don’t have a lot to bicker about this week but they do find one scab to pick at.

Rotten Tomatoes: Rotten Tomatoes is actually quite exciting because the differences are truly large, both numerically and by my scale in how I determine their opinions. Leave it to Rotten Tomatoes to fan the flames of discontent.

The Final Verdict: Rotten Tomatoes stays hectic and appealing if you like danger, whereas IMDB/Metacritic is mostly a safe space with a little bit of trouble threatening it.

But that’s why we have Luke Cage to keep it safe.
Photo courtesy of Lionsgate.

This is the time where I take a deeper dive into the numbers. IMDB in particular offers a few different statistics that I enjoy taking a look at, but I do have another page of charts from Rotten Tomatoes. Until otherwise noted the charts you are looking at reflect IMDB and Metacritic. Rotten Tomatoes is at the end of this section. 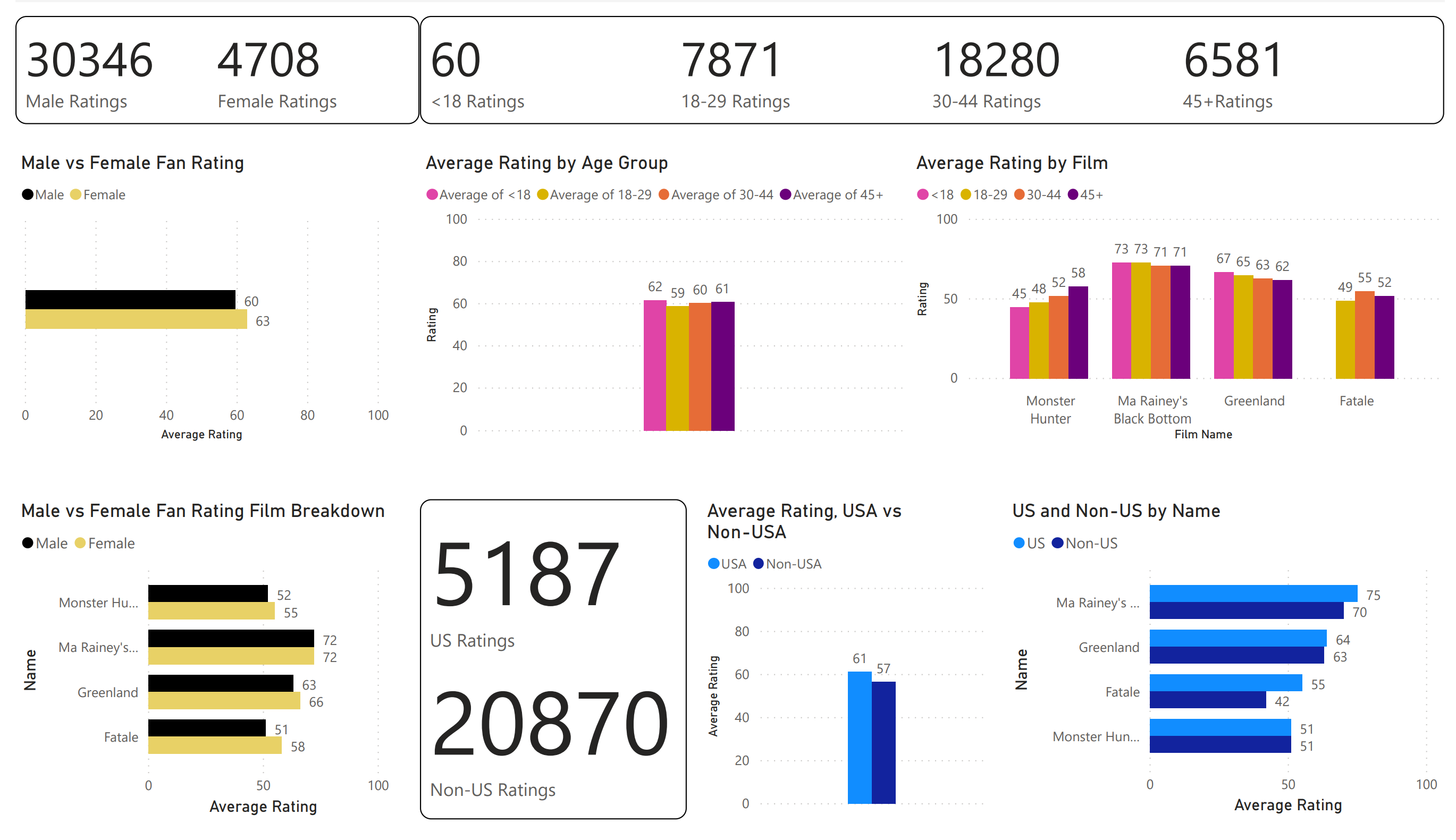 On the bottom half you can see the number of ratings for each demographic. Take a look at Fatale, which is a bit of an oddity. It’s rare that there are fewer non-US ratings than US, but you’ll also see that there are also exactly 17 ratings in the 18-29 age group. This matches the people outside of the USA! Why does this matter? It doesn’t because it’s a coincidence, but 17 is also my lucky number. Why does that matter? It doesn’t because it’s unimportant.

You know earlier how I wondered who is rating Monster Hunter? I don’t have an answer to that relative to what I was asking, but you can see that it’s the people who are 45 or older that are rating it most positively. That’s probably because they are the only people patient enough to sit through the games. I’m just kidding. No I’m not. I don’t like the games but I understand that they are great.

Aside from that it’s pretty normal. Most groups ultimately are in accordance with one another, but there’s a slight variance between males and females with Fatale. Seven points isn’t significant when factored into an average that encompasses all the groups, but when broken down like this it’s somewhat meaningful. 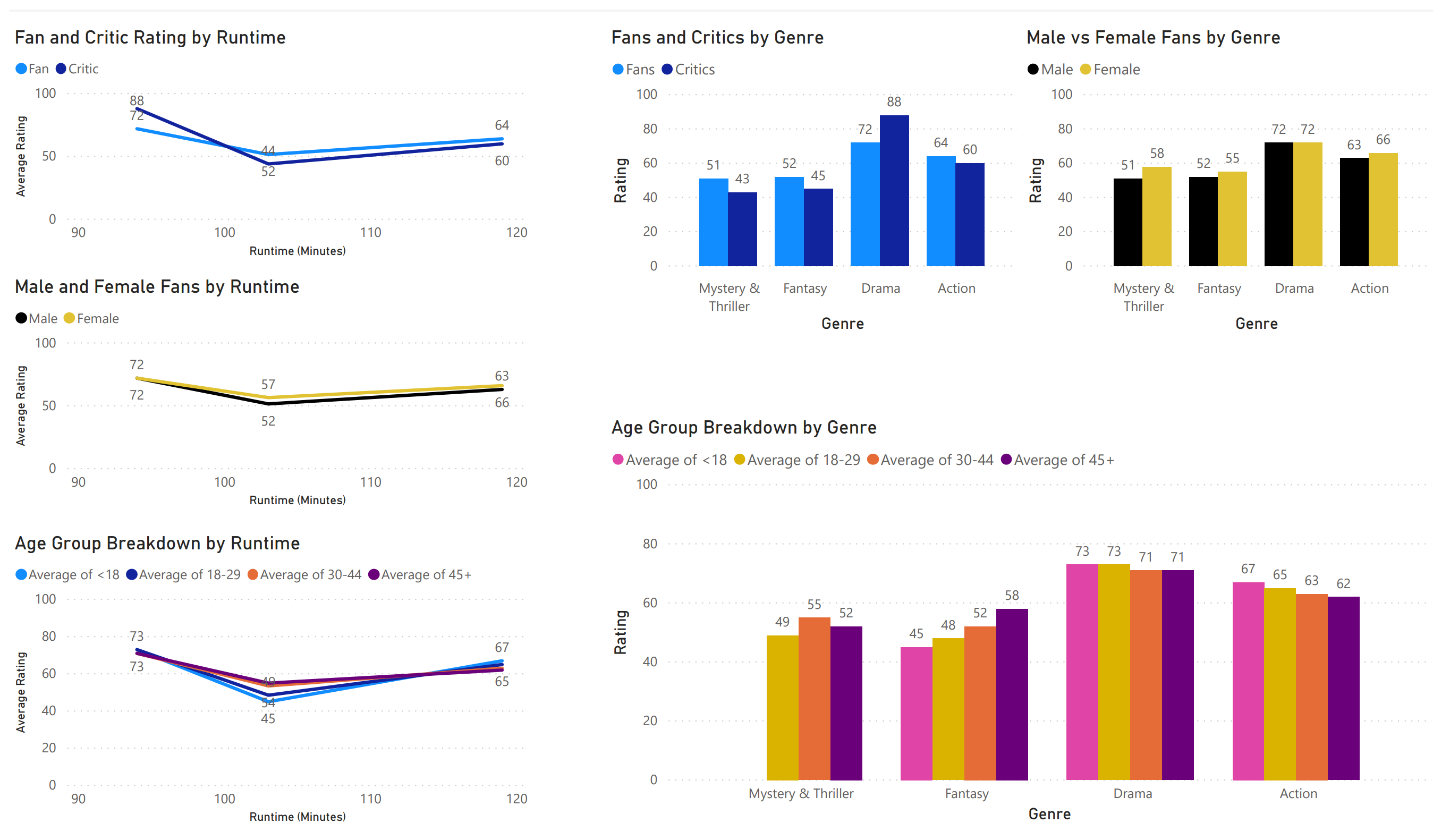 This page doesn’t have anything abnormal. Females rate almost everything higher than their grosser human partners. The runtimes don’t effect one group more than the others except for one instance, and they all seem to enjoy the shorter movies. Dramas rule the day because they are serious, man. 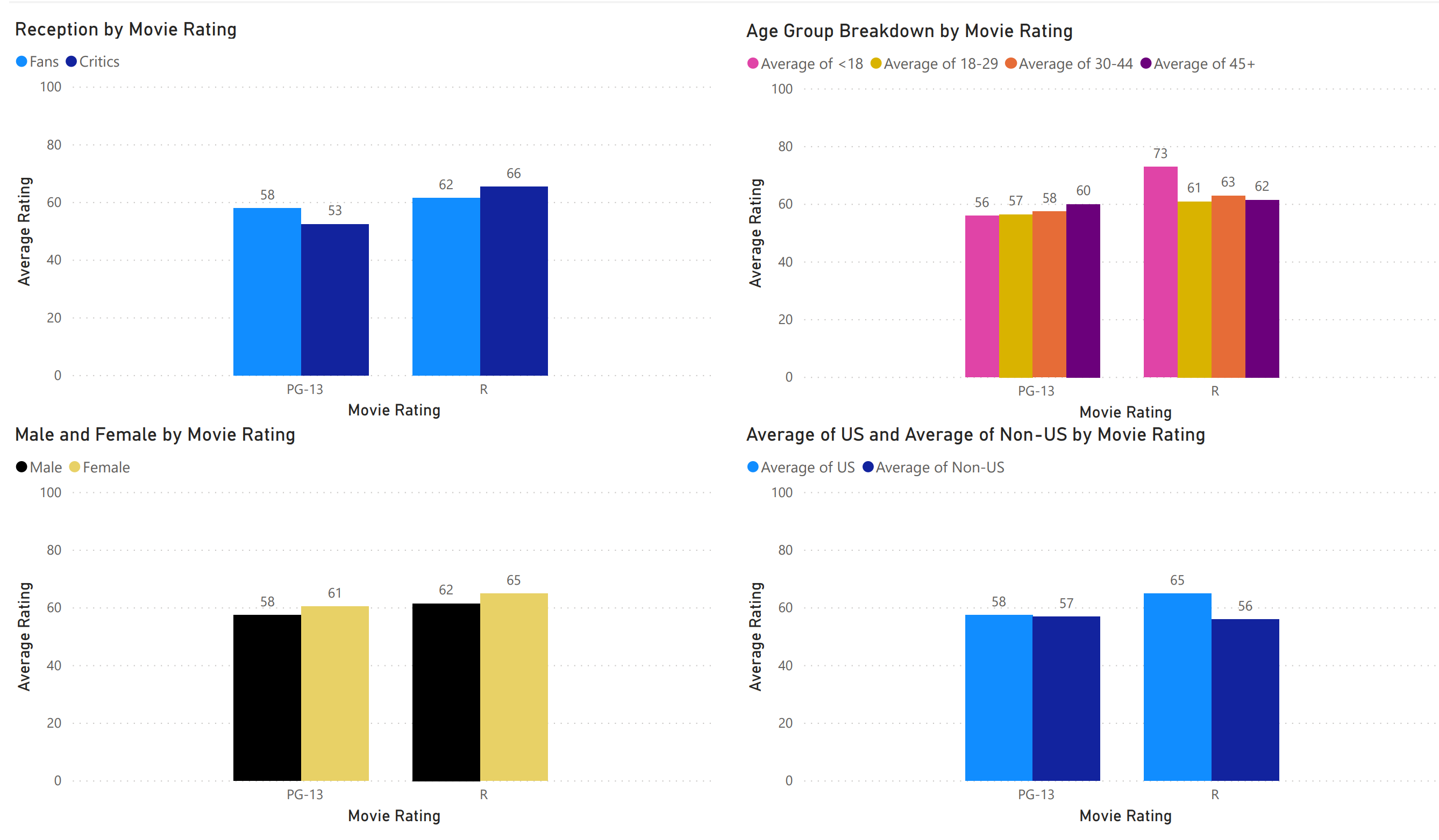 Everybody likes the R-rated movies more, including the damn under eighteens who shouldn’t be there to begin with! Get out of there kids, go watch Monster Hunter. Oh wait, you like that movie the least of the four–screw it, you’ve been terrible, that’s your punishment. The citizens outside of the United States also slightly prefer PG-13, so should we assume that they are wimps? No. No. No. Pretend I didn’t make that joke. 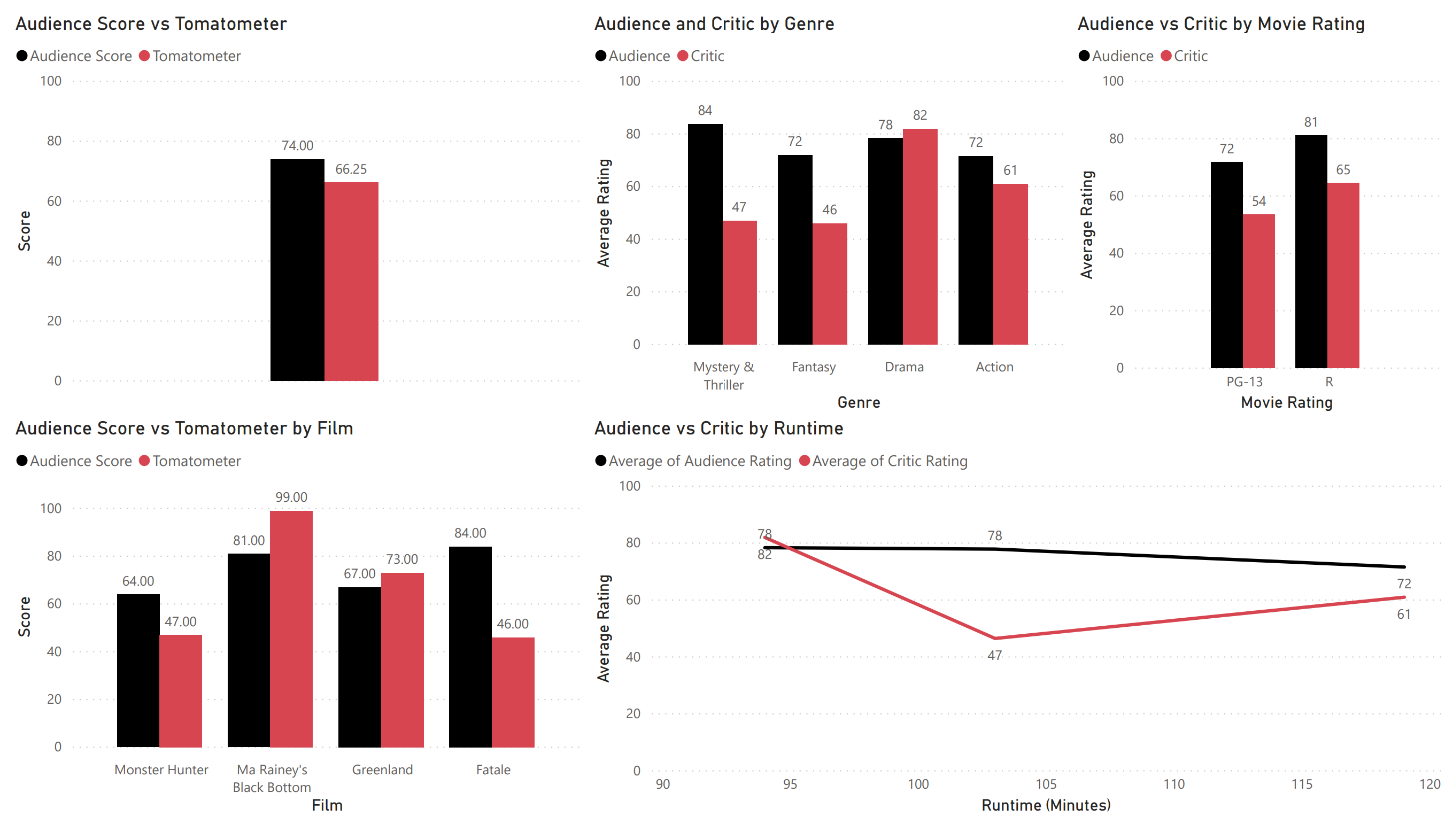 With this we have now entered the Rotten Tomatoes zone. Can we find anything entertaining to squawk about? Nah, because I’m just going to rant–once again–about how people misunderstand the Tomatometer and the Audience Score.

If you’re new here, hello, I’m glad you aren’t sick of this yet. If you’re a returning customer you should already know that the Tomatometer is only the percentage of critics that give the film a passing grade. This means that an average film can get a perfect score if all of the critics give it a favourable rating. The Audience Score acts in a similar fashion.

Take this garbage for example:

Don’t leave! I was just playing devil’s advocate–that’s what we used to call trolling back in my day. Why do I insist on jeopardizing potential friendships? I’ll extend an olive branch. This is my actual rating on Criticker.com: 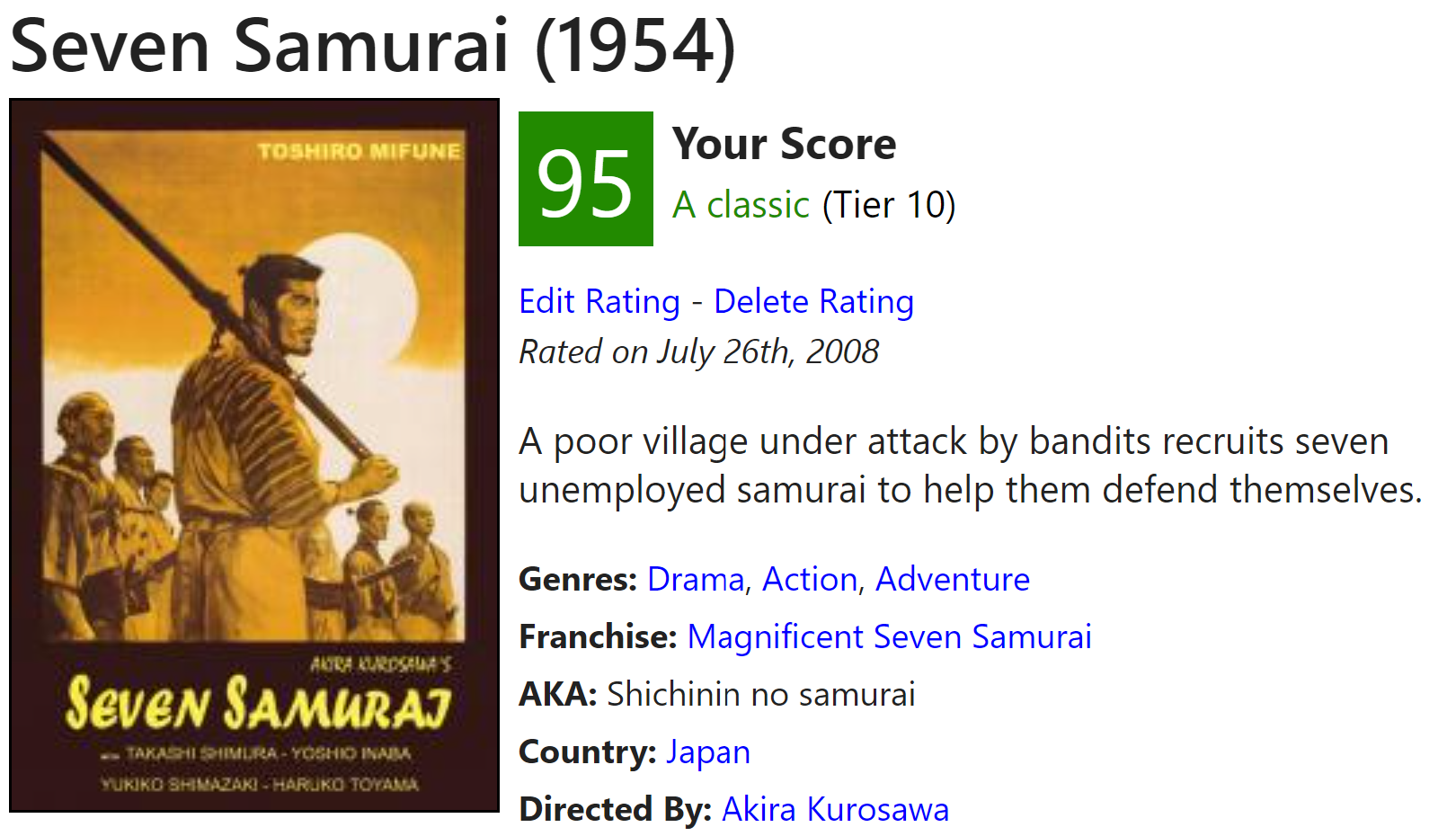 In this case, the Tomatometer reflects the average ratings for the most part but an 82 average rating for Ma Rainey’s Black Bottom is drastically different than its 99 Tomatometer score. If you were a distribution or production company, what would you use? 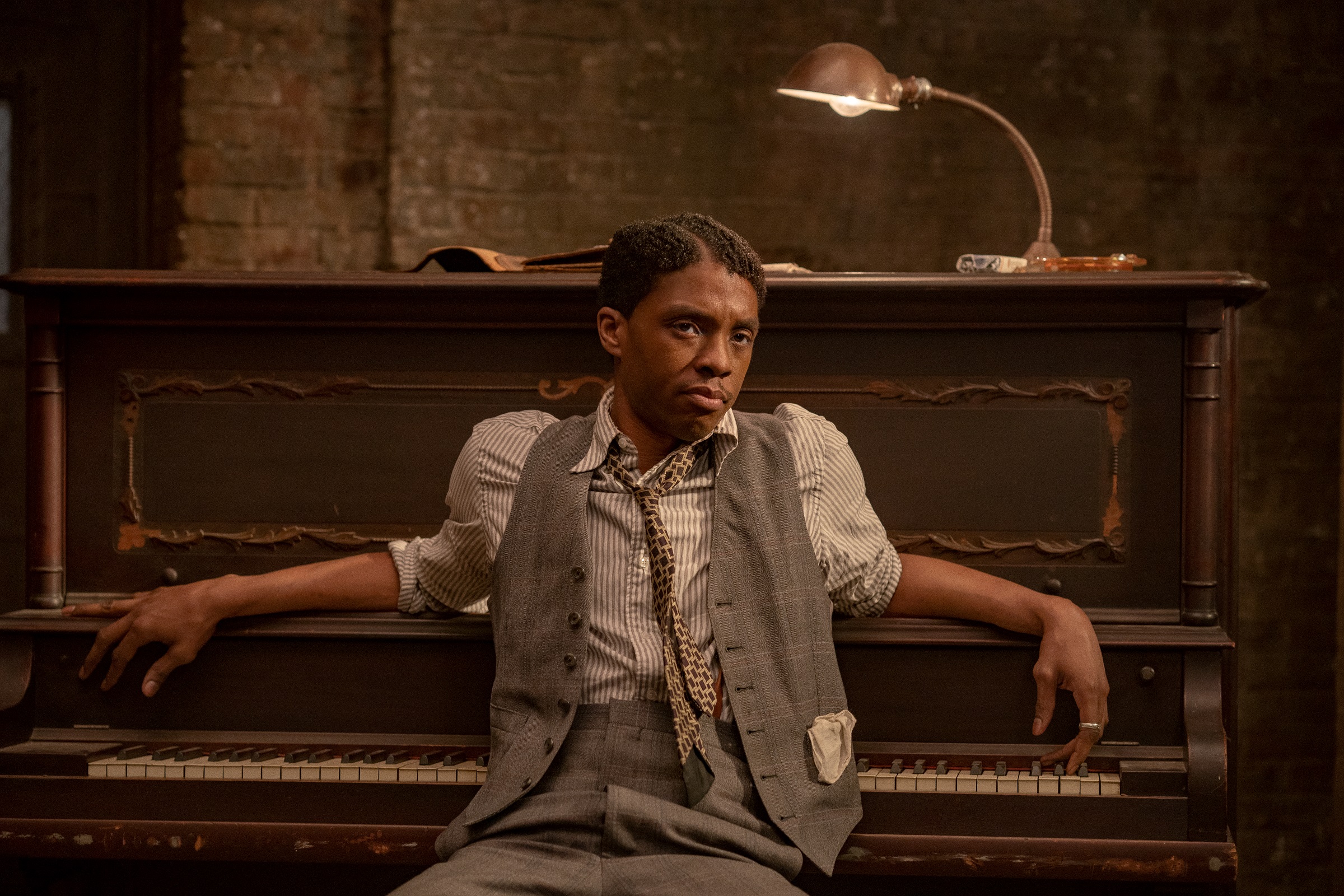 Here’s how the entire thing has unfoled since I began it in September, 2020. I just repeat myself here week-by-week but hey, that’s fine. IMDB/Metacritic is overwhelmingly constructive, wanting to make a better world with a united front. Rotten Tomatoes is pretty much there too but there’s still a bunch of struggle so, theoretically, we could see a day where it’s more jaundiced–even if that’s unlikely.

Rotten Tomatoes has the most “large difference” points, whereas IMDB/Metacritic is on the other side of the spectrum with the most “same opinion” points. The are very similar in the other two categories, which would serve as the average. They function adversely on the extremes. Woo-hoo the bell curve.

So what have we learned on this journey so far? Well, for the most part if you only look at the average ratings then you will find that critics and fans don’t diverge much in general.

Tune in again next week for more banter and poorly made graphs.

He likes the Monster Hunter games and wanted to make sure that I made it clear that I do not speak for him.