Click here to see a disclaimer that goes into more depth about how I figure things out and why I do it. I link to the disclaimer every week so I don’t bore returning visitors who already know what the deal is. I go into a little detail down below but not as much as the disclaimer does.

Fans vs Critics is a series where I take movies that were released recently and examine whether fans and critics agree or disagree! When there’s a movie that divides the two the talking point is always about how critics and fans don’t get along, so I wanted to take new movies and see if that is true.

There have been studies that showed how they differ and align over time, but I thought it would be interesting to see how they relate to each other during the opening few weeks of a movie’s life. I do this by using IMDB, Metacritic and Rotten Tomatoes. IMDB is great for user/audience/fan scores, and it links to Metacritic for critical reception so I compare the two; Rotten Tomatoes has both audience and critics on its site so I compare those directly. Then I do a little bit of figuring (which I describe in the disclaimer) and ta-da, you got yourself a stew.

If I come across a fascinating tidbit while researching this I may do a deep dive into a particular film of a collection of films, but that’s not guaranteed. Also, I know that looking at numbers and graphs can be tedious for some, so I try to instill some humour into the proceedings. What I mean is this: the numbers are real but don’t take it too seriously because we can only know so much from the information given. Let’s have fun with it, especially since with this post I have officially examined the reactions for 100 movies!


On IMDB, Blithe Spirit Is Treated With Blitheness 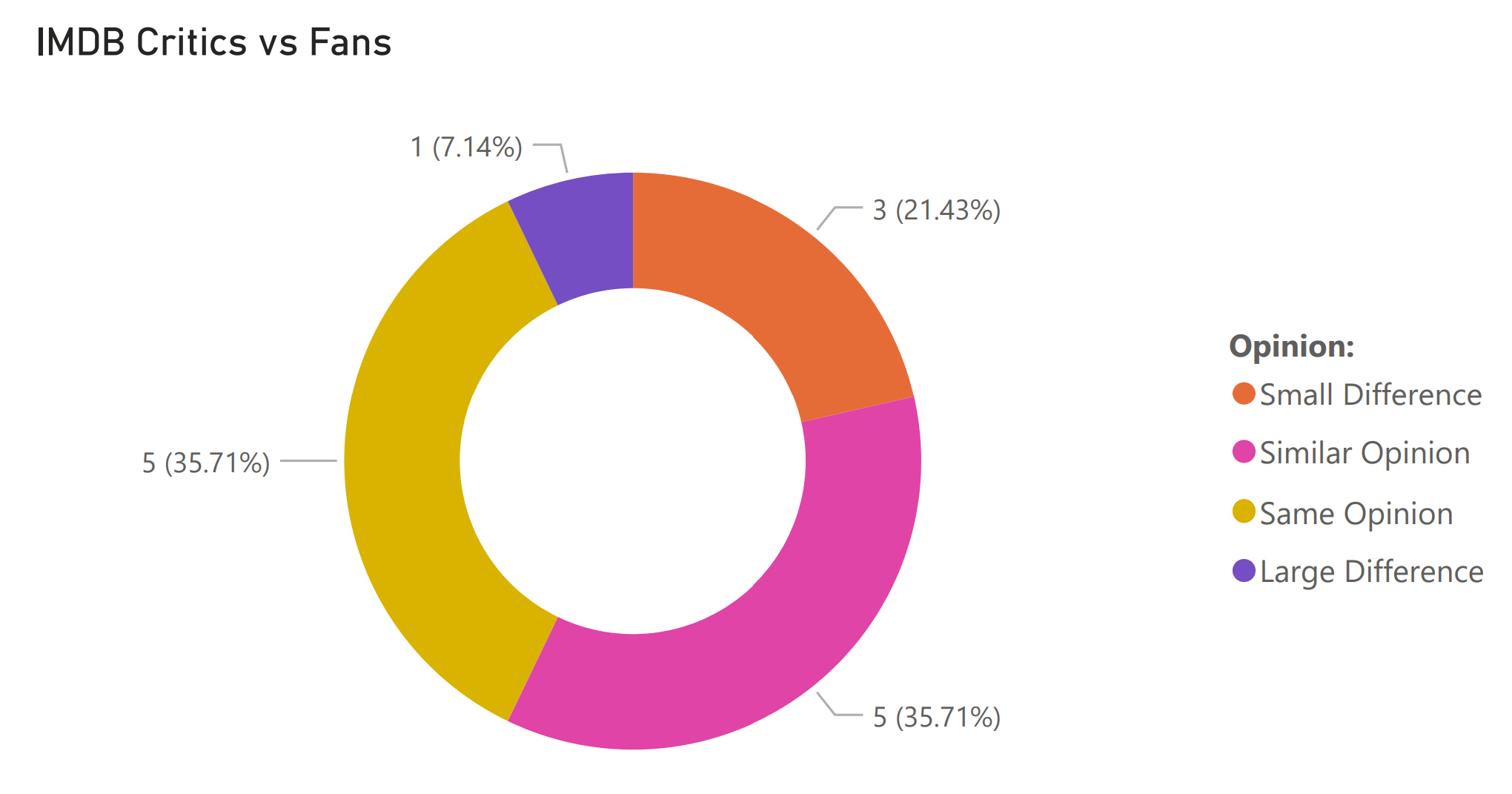 If you’re a fresh face here, this donut chart represents the opinions as calculated by me. Basically, I have a scale that determines whether I classify their opinions as being different or similar. What we find between the critics, as aggregated by Metacritic, and the users of IMDB is that they usually agree to some degree. I said let’s have fun here, not let’s get along!

Let’s see how this shakes down by film.

With six of the fourteen flicks the critics rate it higher on average, whereas with the remaining eight the fans do the same. Confirmed: critics hate movies. But seriously, Blithe Spirit must be the sole large difference because the critics were not havin’ it. Even the fans thought it was mediocre, but at least according to my scale (fifty being a passing grade) they liked it.

Now allow me to poke holes into my own system because that builds trust for me… right? With this bar chart I’ve already demonstrated how data can be easily manipulated/interpreted in such a way that isn’t entirely accurate. How you say! Well, while technically The Mauritanian, Silk Road and Nomadland are all “small differences,” they aren’t treated equally. Silk Road is disliked by critics and liked by fans, even if their adoration is lukewarm. Nomadland is liked by both but loved by critics and The Mauritanian is enjoyed a fair bit by fans but almost not given a recommendation by critics. Likewise, for Willy’s Wonderland, even though it’s technically a “similar opinion” one group likes it and the other doesn’t. Like my stomach fat, there are layers, man.

Blithe Spirit is getting no love. Sorry, Dan Stevens and Isla Fisher. I like both of you. Call me.

On Rotten Tomatoes, People Still Agree Mostly but They Care a Lot 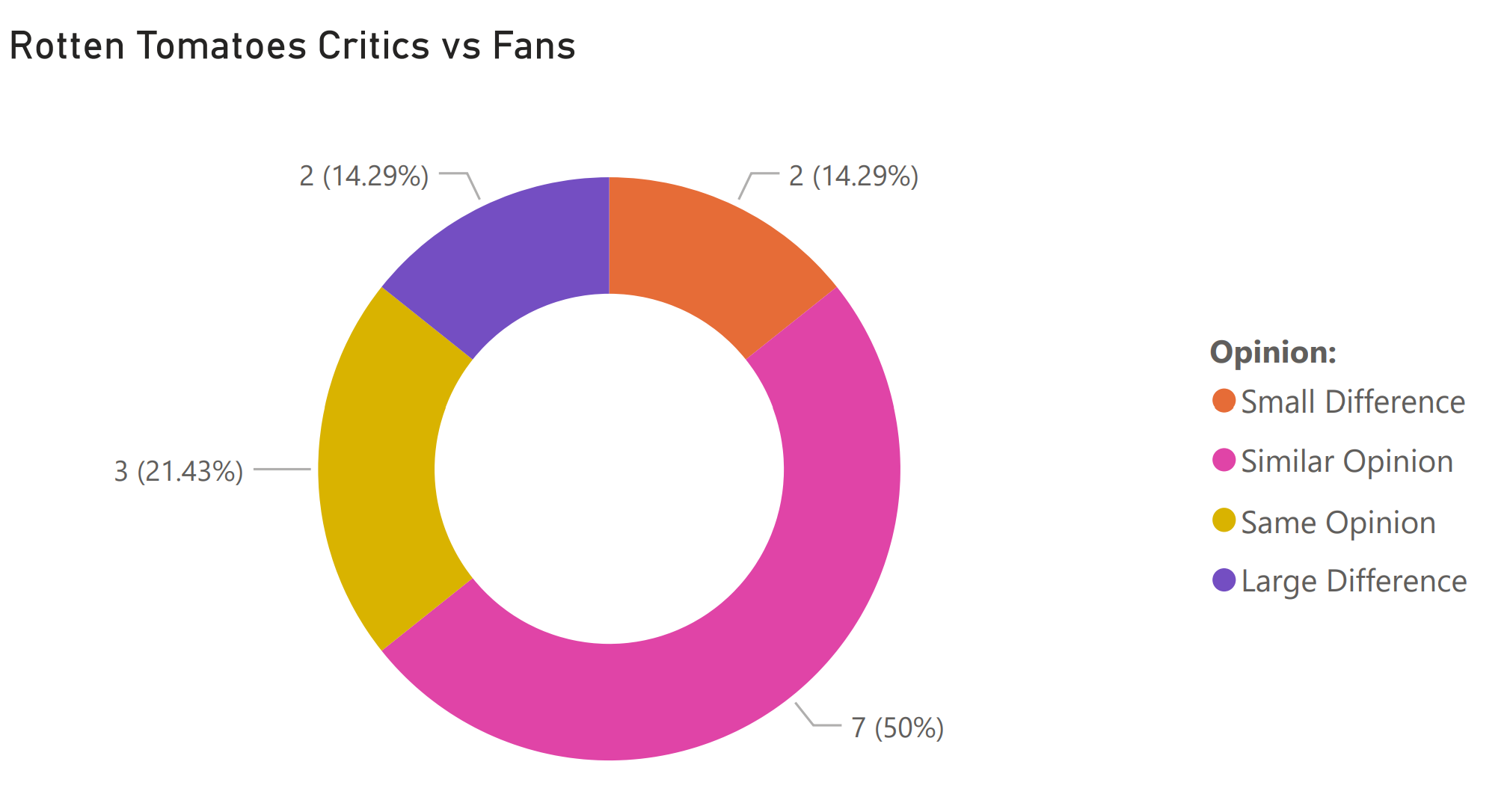 Meanwhile, on Rotten Tomatoes we still have ten agreements and four disagreements even if they are dispersed differently. Of note, there are two large differences which makes me a little excited because I want fights! And you want fights! I would say we could fight each other but I don’t want to get beat up.

Willy’s Wonderland is loved by the fans who frequent Rotten Tomatoes! These are my people, as evidenced by this article where I give it the number two spot in the best movies of the year so far. What other flick causes a disturbance in the force? Why, I Care a Lot is the culprit. You might say that, you might say that, critics and fans really care a lot about this Rosamund Pike joint.

Even after that terrible joke, I’m still not fighting you.

We should note that even though Willy’s Wonderland has disparities in its reception, critics still ultimately enjoyed it a bit, whereas it is not the case that fans also liked I Care a Lot. There are a lot of feelings about why the audience didn’t take to it, some more valid than others, and I wanted to see some data on it but that information isn’t available for me on Rotten Tomatoes.

On IMDB the movie wasn’t dragged through the mud by the public so it’s not apples to apples, but according to the information provided by IMDB, there isn’t really anything sketchy going on there either. Men rate the movie .2 lower but that’s not actually uncommon in part because there are more men rating movies. In fact, the group that rated it the lowest on IMDB? The under eighteen female crowd! Now, as of writing this there are only eight of them but they gave it a 5.5, compared to the twenty-seven males who gave it a 6.4. But that’s enough IMDB talk; sorry Rotten Tomatoes, let’s get back to you.

Fans and critics are united almost completely on Minari, Judas and the Black Messiah and… Barb and Star Go to Vista Del Mar. So that’s a thing. On a final note, it’s funny how even though there are just as many agreements and disagreements on IMDB/Metacritic as there is Rotten Tomatoes, that fact reveals itself quite a bit differently. Are different users going to the sites? I would say yeah, in general. 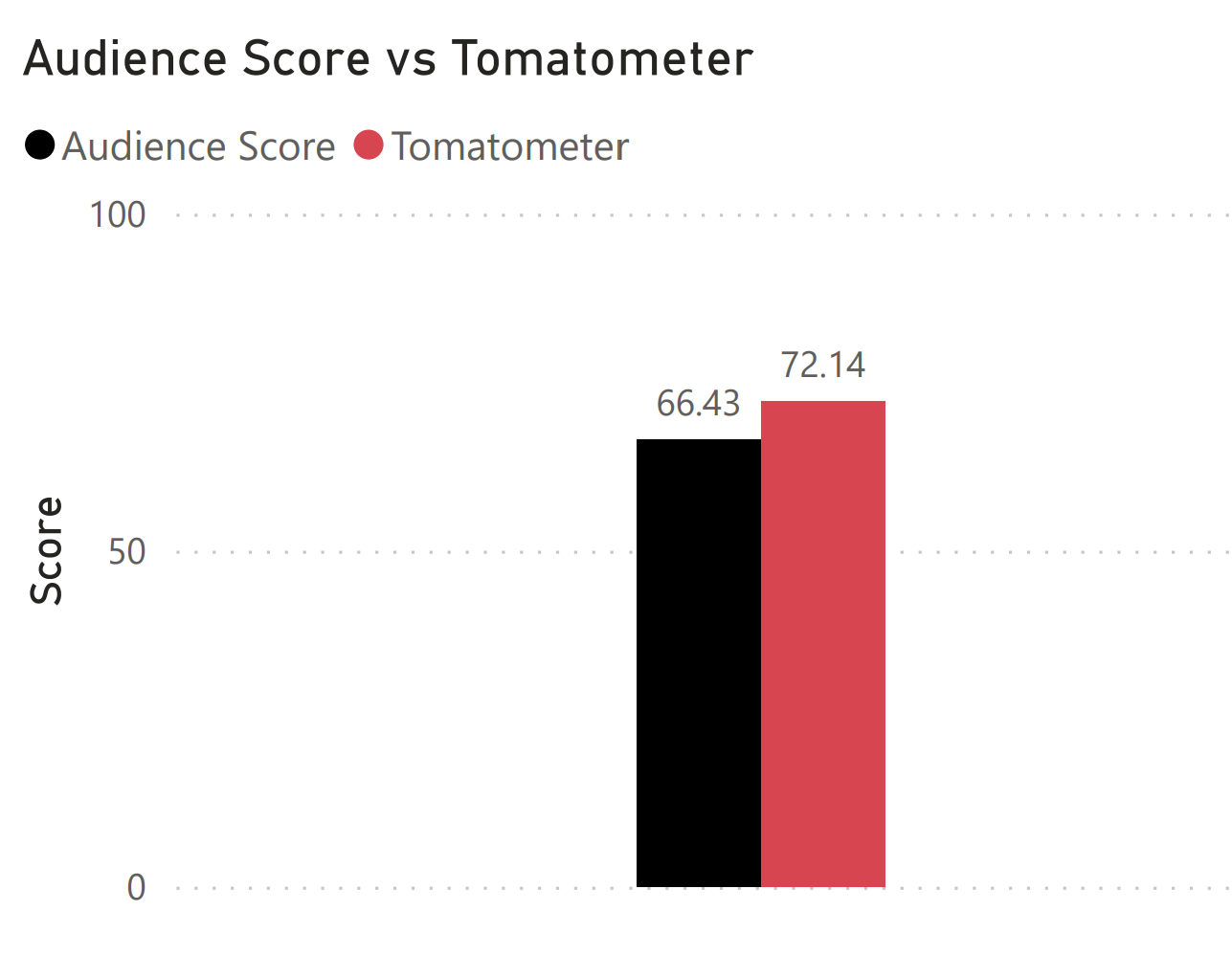 I like to throw in the Tomatometer/Audience Score, mostly because that’s what people know Rotten Tomatoes for. It’s also what is most frequently misunderstood by the public, and used by companies in order to sell their product. With that said, it’s still entertaining to look at because it breeds fun results sometimes. But first, we need to talk about what the Tomatometer and Audience Score actually represent!

The Tomatometer is not an average score. It is merely the percentage of critics–and in the case of the Audience Score, the users of Rotten Tomatoes–who give it a passing grade. But to make matters worse, 50% is not a passing grade; 60% is. So it’s a little silly. But to quote the great Kurt Vonnegut, “So it goes.”

Anyway, you see that the Tomatometer and the Audience Score, when averaged out, are pretty similar. So let’s break it down by individual flick and see what’s happenin’.

So if we go by this, as a collective, nobody thinks you should go see Silk Road and Blithe Spirit.

Almost every critic wants you to see Minari and I’m a little disheartened, honestly, by the fact that only 75% of the audience want you to see Nomadland. I mean, it’s still most of them, but c’mon. Get in your van and go see it!

A previous pattern emerges once again. IMDB/Metacritic has more “same opinions” and Rotten Tomatoes has more “large differences” when it comes to opinions. It’s relatively uncommon to have a “small difference” of opinion, especially on Rotten Tomatoes but almost half the time critics and fans have a “similar opinion” on both websites. So when people say fans and critics are at each other’s throats you can point them here and say, “This random dude on the net who isn’t a statistician or a qualified data analyst in general with his own methodology says that a large portion of the time fans and critics agree!” Make sure to breathe halfway through that obnoxiously lengthy sentence.

We’re at the end, folks. We’ve laughed, we’ve cried, we saw a portion of the excellent Oldboy (2003) corridor fight scene. If I’ve done nothing else during this catastrophe, I hope that I’ve encouraged you to seek out Oldboy, the Chan-wook Park masterpiece. On a final note, I actually thought his name was Chan-woo Park until this very moment. I have also been educated.

Above all else, I hope you’ve had a good time. I’ve taken out previous charts that I used to include in an effort to shorten the procedure but I think what happens is that I just end up talking more so I don’t know if it has helped. Regardless, I hope you enjoy the format and come back next time!

However, he is qualified for this.