Friday the 13th Feud: Bad Hair, Borat Subsequent Moviefilm and Over the Moon.

Click here to read the disclaimer if this your first time reading a Fans vs Critics article. It gives more details about the nonsense that’s happenin’ here.

Do you remember me? Probably not, it’s been a few weeks since a new Fans vs Critics went up. Truth be told, I took a brief hiatus. But never fear because the triumphant return has arrived. With that said, the format has been revamped a bit. It’s nothing huge, but I now take movies from three weeks ago instead of two, in an effort to give fans more time to rate them. I was finding that two weeks wasn’t always enough time because there were some movies that still didn’t have Rotten Tomatoes audience scores.

If you’re new and are wondering what it is we do here, the answer is simple: answer the old debate about whether fans and critics agree or disagree. Okay, so it’s impossible to actually definitively answer that. However, I thought it would be fun to see how fans and critics compare within the first few weeks of release. It is by no means the final solution to the problem, but it’s a look at it. It’s just a way to have fun, ultimately, so my hope is that you read this and are at least slightly amused by it.

World Peace Is Possible With Borat, at Least According to IMDB So it’s already a love fest. I wanted the homecoming to be more exciting, but alas, the fans and critics are aligned on IMDB/Metacritic. There are rainbows everywhere and everyone is happy, so let’s just break it down by film so we can get a better idea of what’s making us throw up. 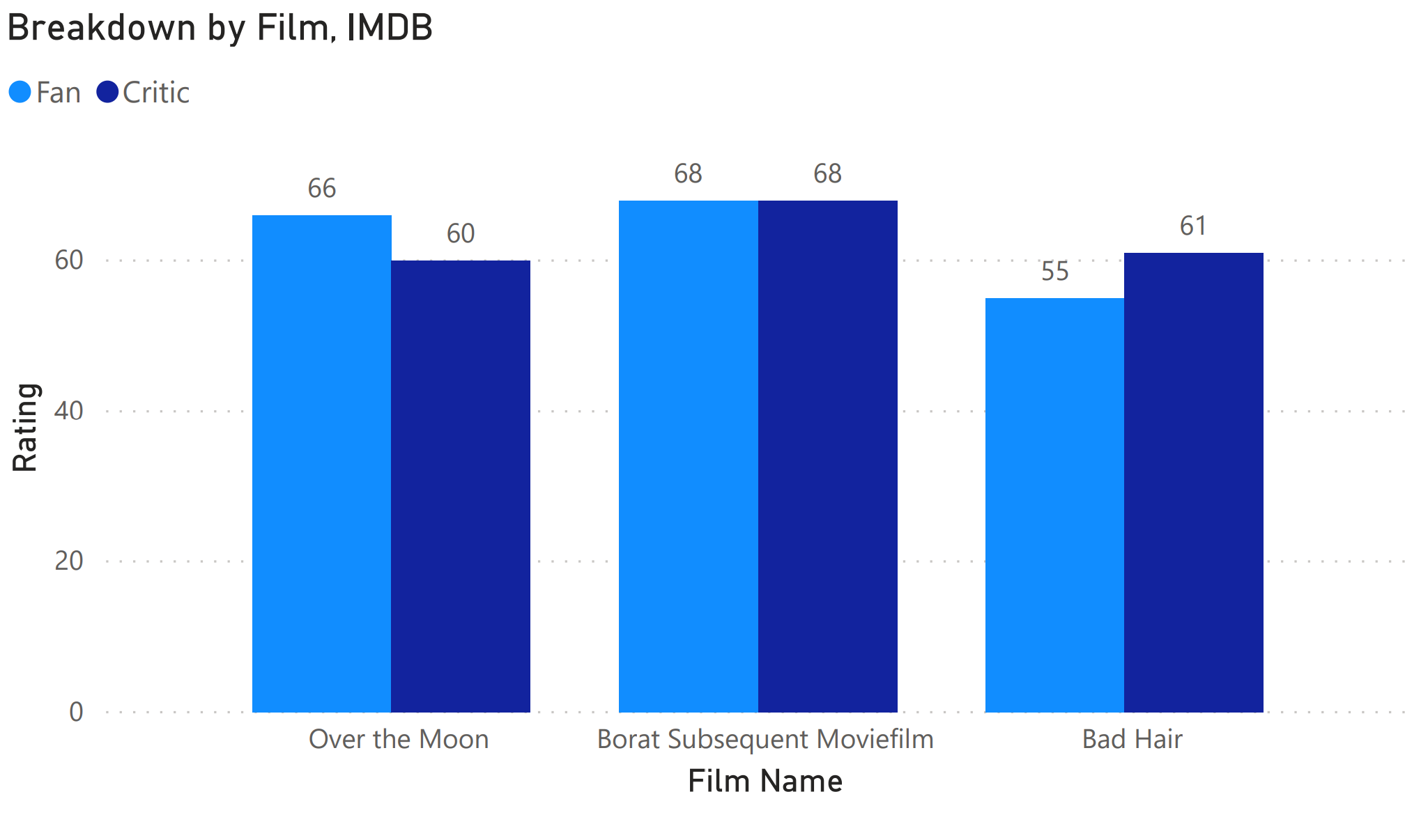 There’s a certain pleasantness to the fact that the fans and critics align perfectly on Borat Subsequent Moviefilm: Delivery of Prodigious Bribe to American Regime for Make Benefit Once Glorious Nation of Kazakhstan (seriously, that’s the full title). Younger me felt that only The Muppets and Super Mario could usher in world peace, but maybe it’s Borat. It hurts to know when you’ve been mislead your entire life.

Aside from that, there’s nothing terribly interesting about what these charts show, so let’s move onto Rotten Tomatoes, where surely there is an intense conflict filled with unbridled fury and resent… 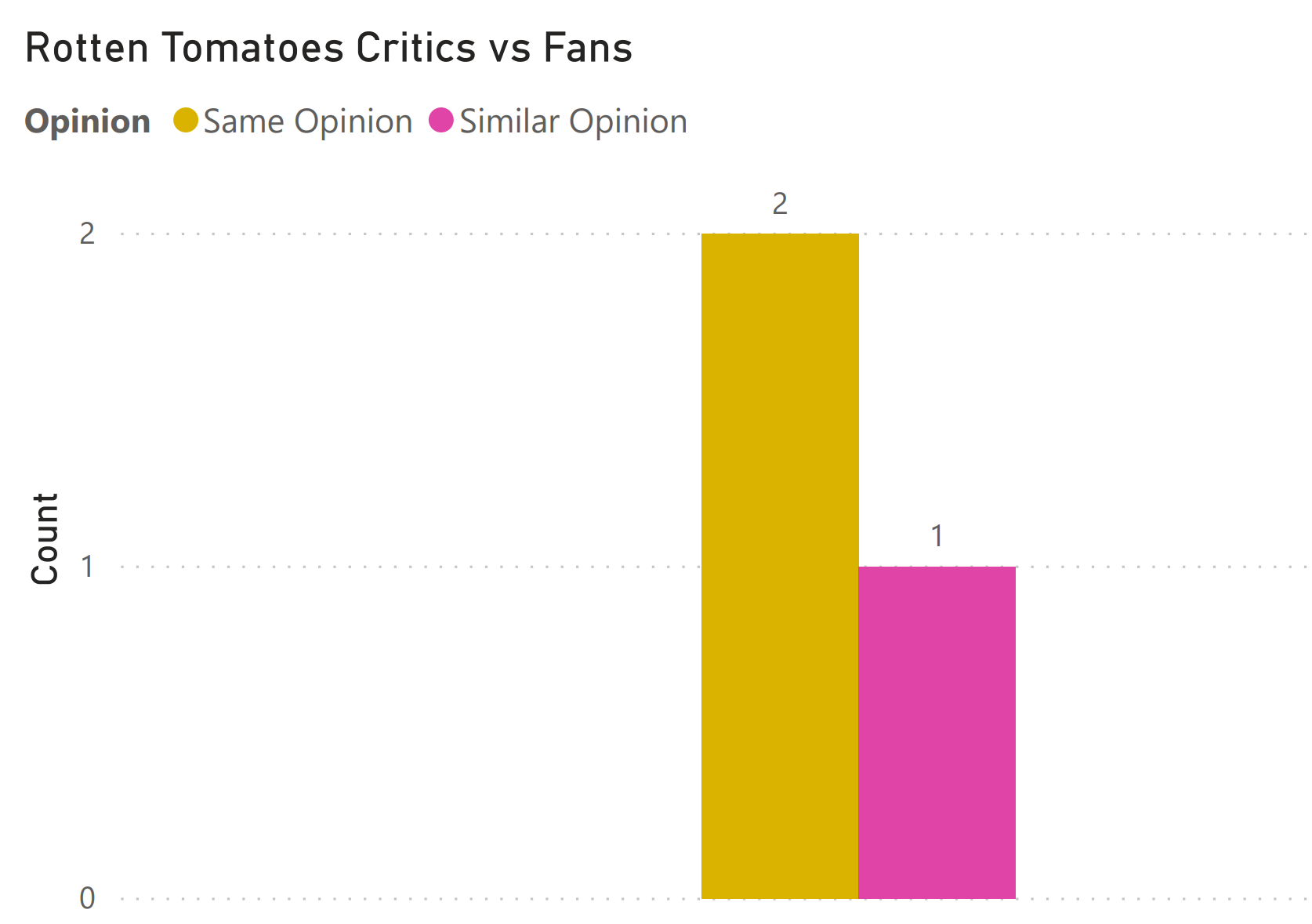 This is actually mildly engaging because historically, since I began this a couple months ago, Rotten Tomatoes has demonstrated fewer “same opinion” conclusions. That it has more than IMDB this week is, at the very least, different from what I’ve become accustomed to. So let’s see how exact the comparisons are. 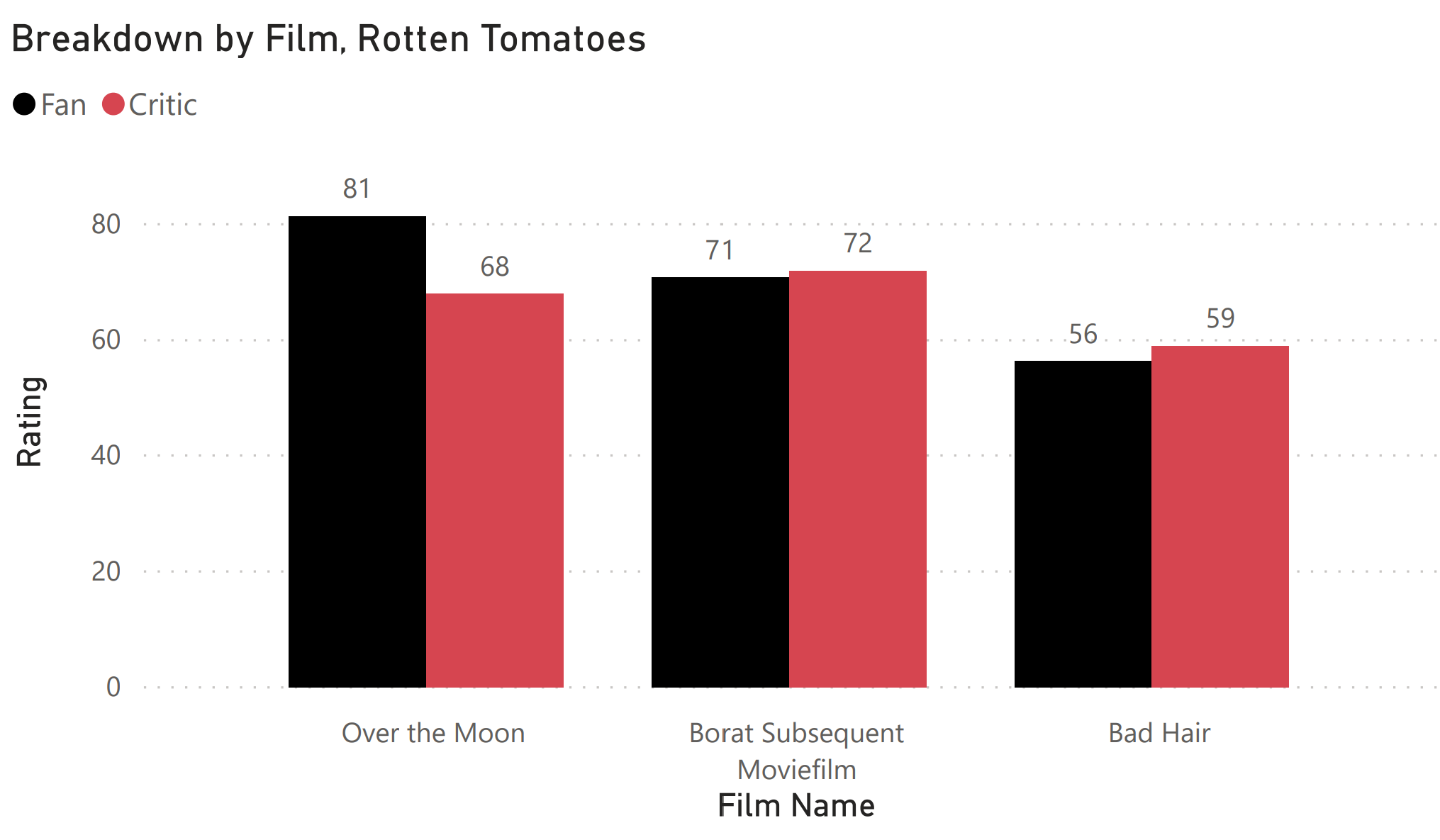 When drilled down by film the results are much more fascinating. If you’ll look above at the IMDB charts you’ll see that Over the Moon and Bad Hair only differ by six points. Anything five points or lower is considered “same opinion” on my scale so it came dangerously close to being the same all across the board. One point off, to be precise. We’ve never seen a clean sweep before.

We still get some fighting because of Rotten Tomatoes so it’s not a total bust. Sure, the ratings for two of the movies are practically on top of each other, but look at Over the Moon. It was still a few points away from being considered a slight disagreement, but at least it was trying. Courtesy of Amazon Studios. The fans and the critics this week.

IMDB: We were one point away on two movies from seeing a complete and pure agreement from front to back. Fans on IMDB and critics on Metacritic love each other, it’s cute.

Rotten Tomatoes: It’s similar on Rotten Tomatoes but because of Over the Moon there’s a little bit of tension in the relationship.

The Final Verdict: In the United States there’s a lot of polarization because of the election, but in movie world all is right and there’s no controversy. God bless you, cinema.

If You Left Now You’d Have the Basic Story, but if You Stay You Get a Deeper Breakdown of Some Numbers, Plus You Provide Meaning to My Otherwise Meaningless Life

So I see that you’ve stuck around. Good! Now watch as I magically dissect the available data in more depth. Until otherwise noted the charts all reflect IMDB and Metacritic because IMDB is wonderful in that they make a lot of data available for the public. Unfortunately there’s not a whole lot to discuss here but I discovered a few tidbits. The under eighteen crowd has the lowest average rating, but that’s due to the dislike of Bad Hair. The caveat being that there are so few teenagers actually rating movies on IMDB that the sample size is small–Bad Hair had one rating. One angry teen.

Outside of Bad Hair, the average score goes down as the people get older. 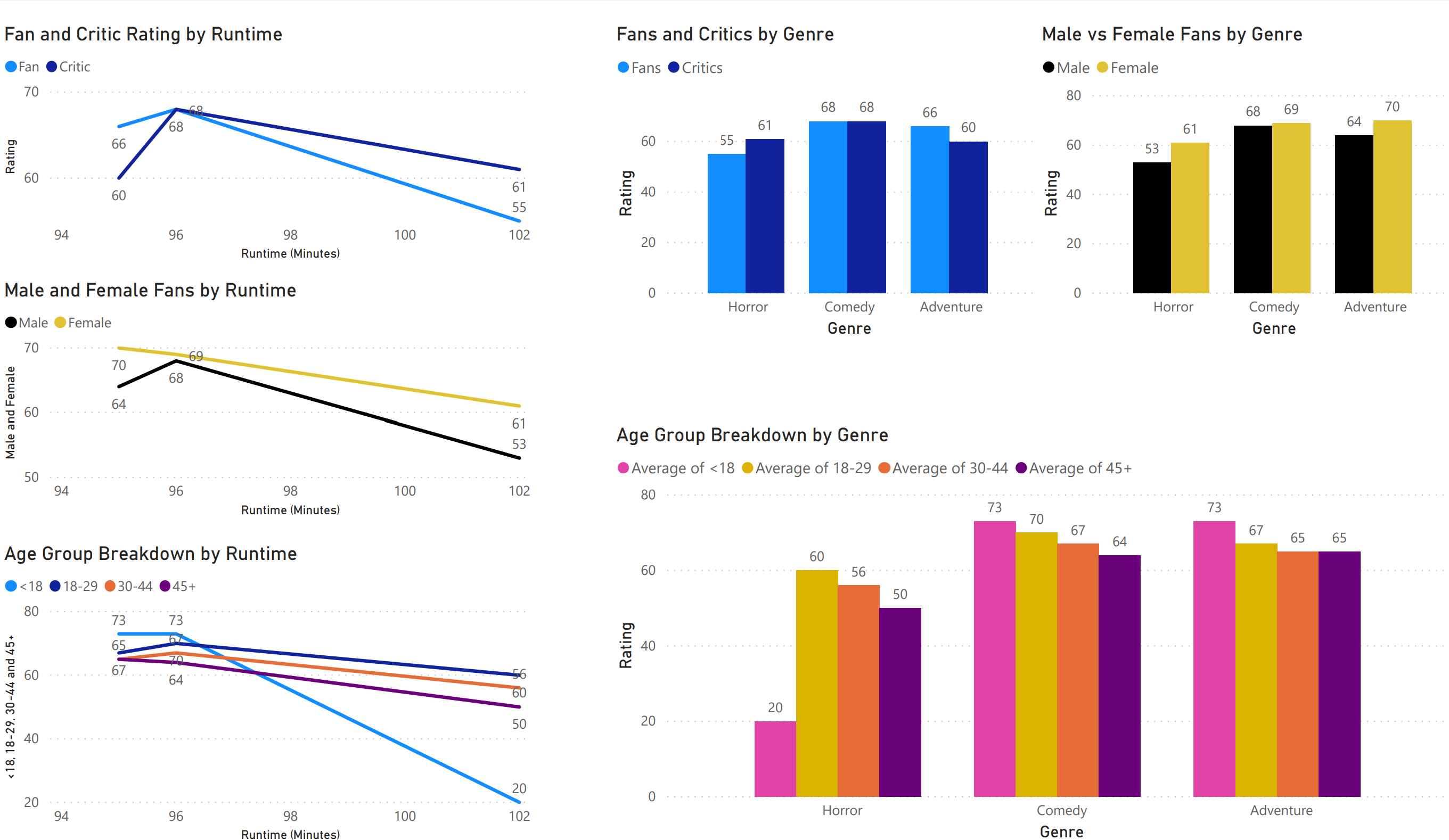 The fans of both sexes, of all age groups, feel that the longest movie is the weakest movie. That would be Bad Hair and I guess Bad Hair is a bad movie. I’ll see myself out.

Oh, before I go! The critics actually like the shortest movie (Over the Moon) the least. That was definitely worth me sticking around for, wasn’t it? 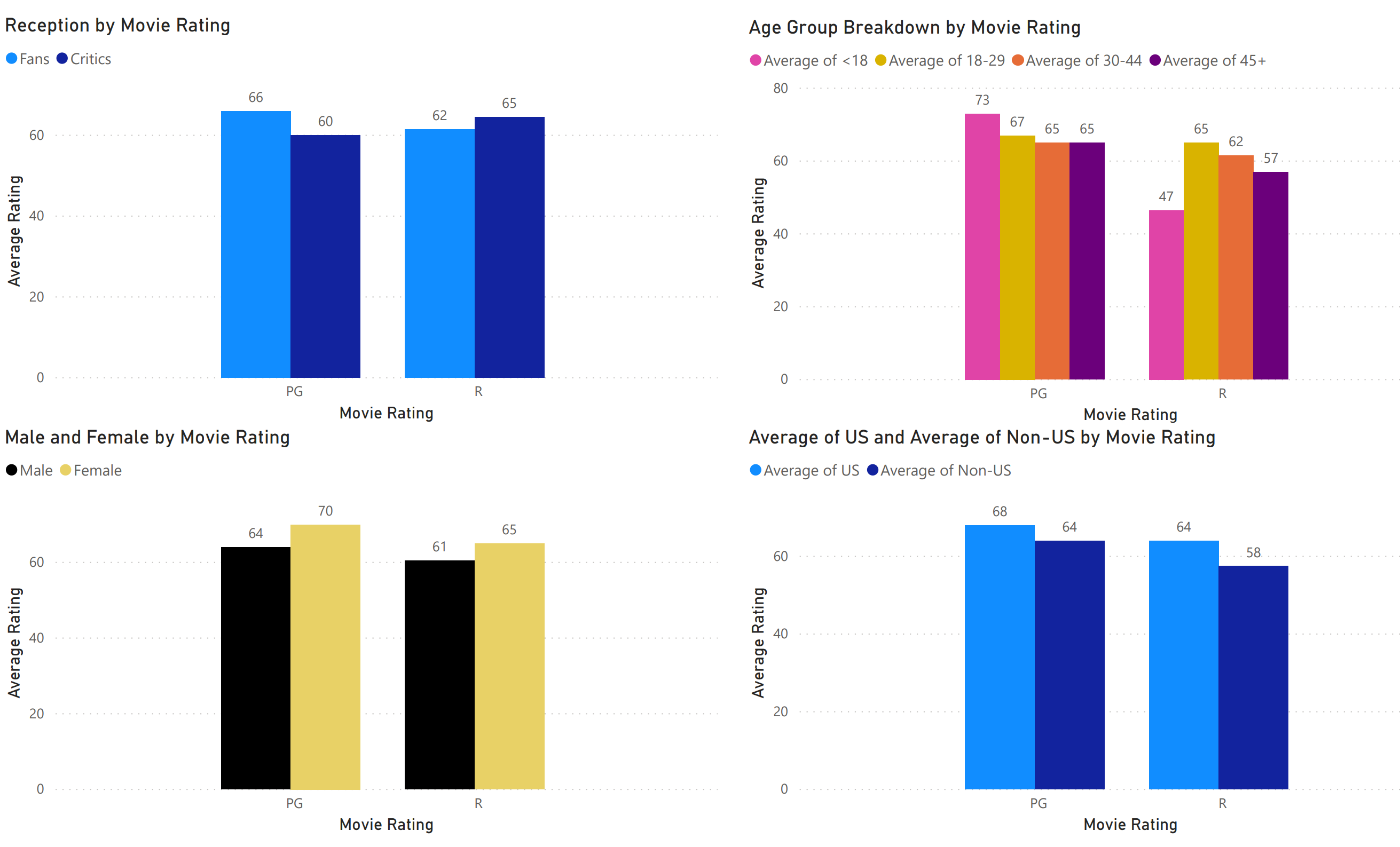 The critics prefer the R-rated movies, whereas fans prefer PG. It’s important to note that there are two R-rated flicks (Bad Hair and Borat Subsequent Moviefilm) as opposed to one PG. Normally I can recycle the same joke about how the under eighteen crowd prefers movies that they aren’t allowed to go watch–R-rated ones–but this time I’ve been denied that opportunity. In fact, they actually prefer going to movies with their parents, apparently. The hell, man?

Females like both PG and R movies more than males this week, whereas the USA feels the same way. So American females are driving all these ratings, confirmed. Aside from this, there’s not much interesting going on. The final page of charts comes courtesy of Rotten Tomatoes.

The left half of the page contains the secrets of the sacred Tomatometer, along with the less revered audience score. As I describe every single week, the Tomatometer is not the average rating of films, nor is the audience score. They are just the percentage of how many fans or critics give the movies a passing grade. A totally mediocre film could theoretically get a 100% score if every critic gave it a passing grade.

But boy is the Tomatometer fun to look at, isn’t it? There’s always some movement on this side of the page.

If you look at the “Audience and Critic by Genre” chart in the middle of the page you’ll see that the horror movie–Bad Hair back it again like herpes–has an uninspired average rating of 56 and 59, respectively. But if you’ll glance at the “Audience Score vs Tomatometer by Film” chart you’ll see that Bad Hair has less than a 50% on the audience score. That basically proves what I said above: only 43% of the audience gives it a passing grade and yet it still managed a 56 average rating.

This hasn’t been the most exciting Fans vs Critics edition so I suppose a bit of gratitude to the Tomatometer/audience score is in order since it attempted to spice things up a bit. Thank you misleading scoring metric. As we close up shop for another week (no I’m not shutting down the website, sorry), here is the tally so far… in case you couldn’t tell by the subheader.

On IMDB the race is all but over, sad to say. I can’t see a world where the agreements and disagreements ever level out. At this point the fun is in seeing just how much fans and critics can agree.

Rotten Tomatoes still has a chance of spilling over. It would take a few weeks of negativity in order for that to happen, which seems unlikely, but it’s still possible. It already has more large differences in opinion than the IMDB/Metacritic crowd, but it’s inching closer to having more of the same opinions as well. Will Rotten Tomatoes eventually occupy both extremities? 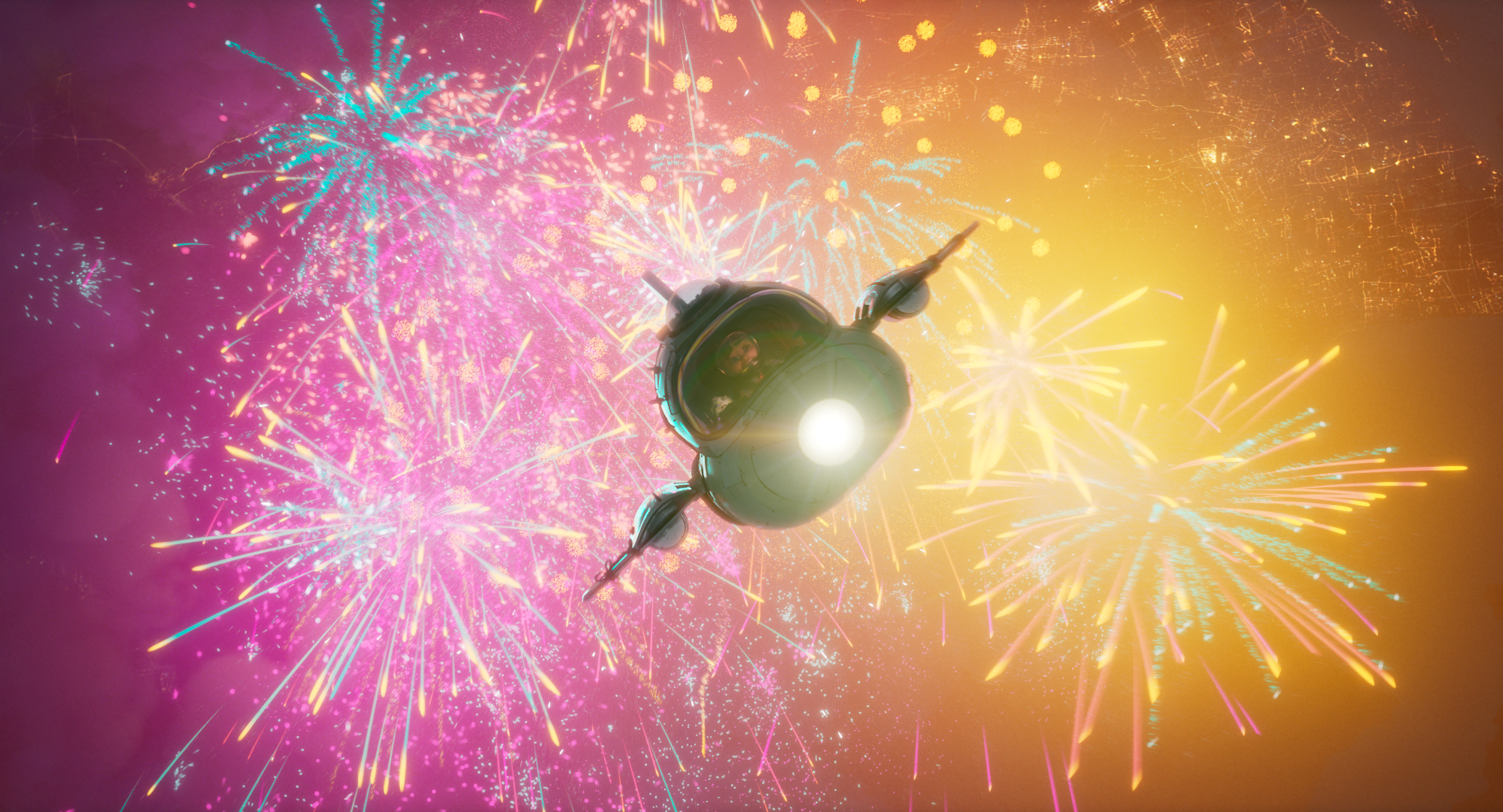 The only critic that matters.