Fans vs Critics–November 20 2020: Alita: Battle Angel Brings the Pain, but Is There a New Challenger in The Craft: Legacy?

Click here to read the disclaimer if you’re new here and don’t understand what you’ve stumbled into. The disclaimer elaborates on the situation more than I will here, just to avoid wasting the time of returning viewers.

Why hello there! You may be wondering what exactly this is, and luckily for you I’m here to explain. If you’ve ever wondered whether critics and fans agree or not then the cleverly titled Fans vs Critics series that I’m doing here may entice you. Every week I take a few movies that were released a few weeks ago and compare the immediate reactions from both fans and critics, in an effort to shine a little bit of light on the question.

But why do I take movies released a few weeks ago? I take movies from a few weeks ago in order to allow fans a bit of time to rate them. It doesn’t paint a completely accurate picture because it won’t show how opinions change over time, but it’s still worth considering because theoretically the bigger movie buffs probably end up seeing them right away. Initial reactions are important and it’s what websites write about most. Ultimately, let’s just have some fun with it.

I compile the ratings from IMDB and Metacritic–because IMDB gives audience ratings and links to Metacritic for critics–then compare those. That’s followed by getting the ratings from Rotten Tomatoes and comparing those. Then I do a little bit of magic, throw together some charts, create a scale that determines just how much they agree or disagree and ta-da, you have yourself a Friday Feud piece. Let’s blow down the doors for yet another week and see if the critics are friends or foes.

Alita Has Come Once Again to Cause Arguments on IMDB/Metacritic 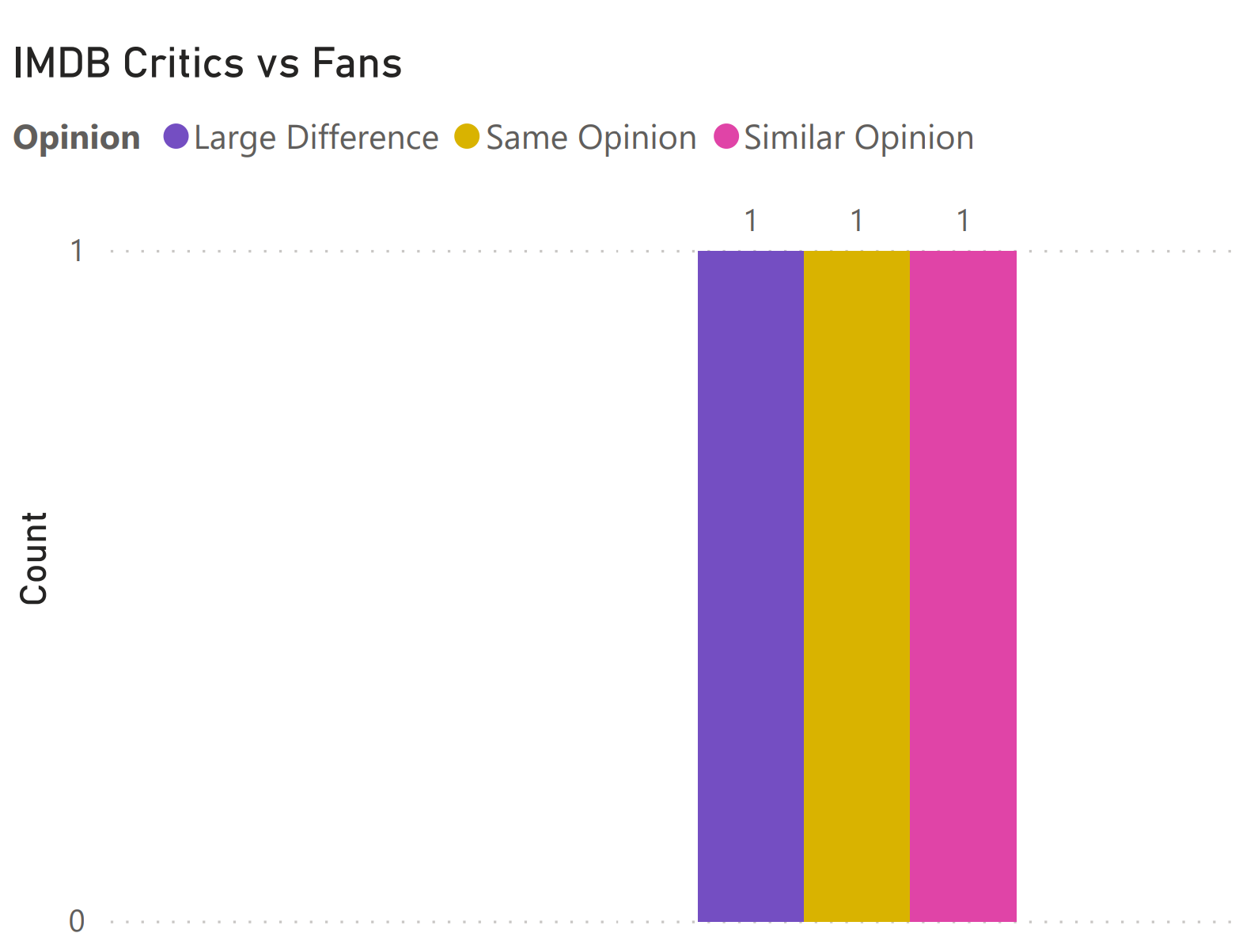 There’s a little bit of intrigue on IMDB. Normally there’s just a lot of agreement, and while there’s certainly that, there’s a large difference scattered in there. That means that there’s a fight! There’s blood!

I don’t examine the numbers much while I’m inputting them, and even if I did my memory is so bad that I’d forget what I knew by the time I got around to writing this. So I am like you and learning along the way, but my guess when I first saw the bar graph was that the large difference is for the re-release of Alita. You’ve already seen the headline so you know this is true, so thankfully the internet can’t scoff me yet. 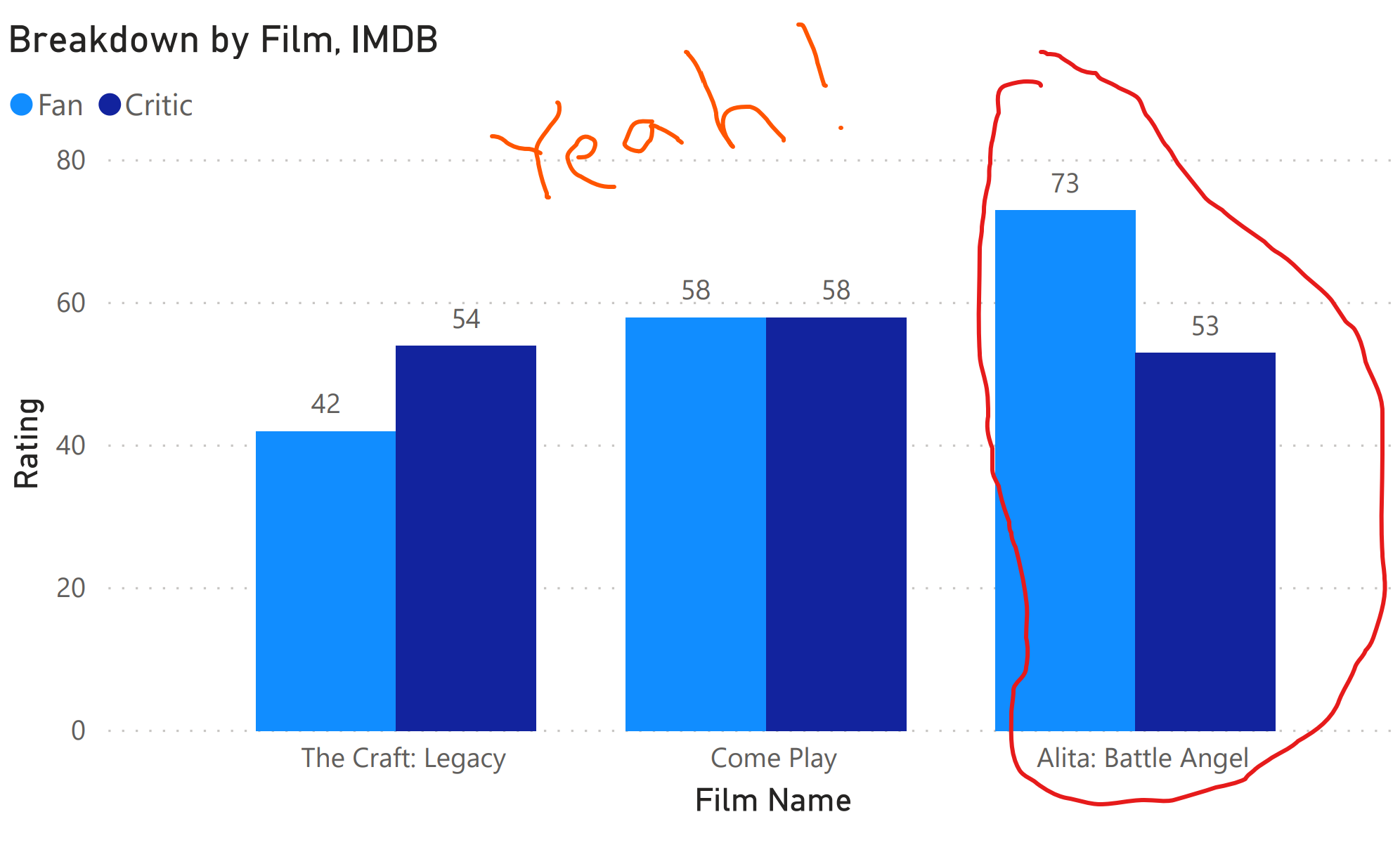 There you have it, Alita is the bad girl of the pack. That doesn’t surprise anybody who has followed the Battle Angel campaign. However, even though critics on average aren’t overly enthused by it, if you consider 50 the passing grade, they still liked it, even if they felt it was mediocre. So despite the huge difference, both fans and critics like it.

In that sense, The Craft: Legacy provides us more of a talking point. The ratings may be closer numerically but if you look, the fans don’t like it and the critics do. The switch from appreciation to disparagement is a bigger deal to me.

They also agree completely that Come Play is very mediocre. Also not surprising, but it’s always lovely when their opinion is exactly the same. 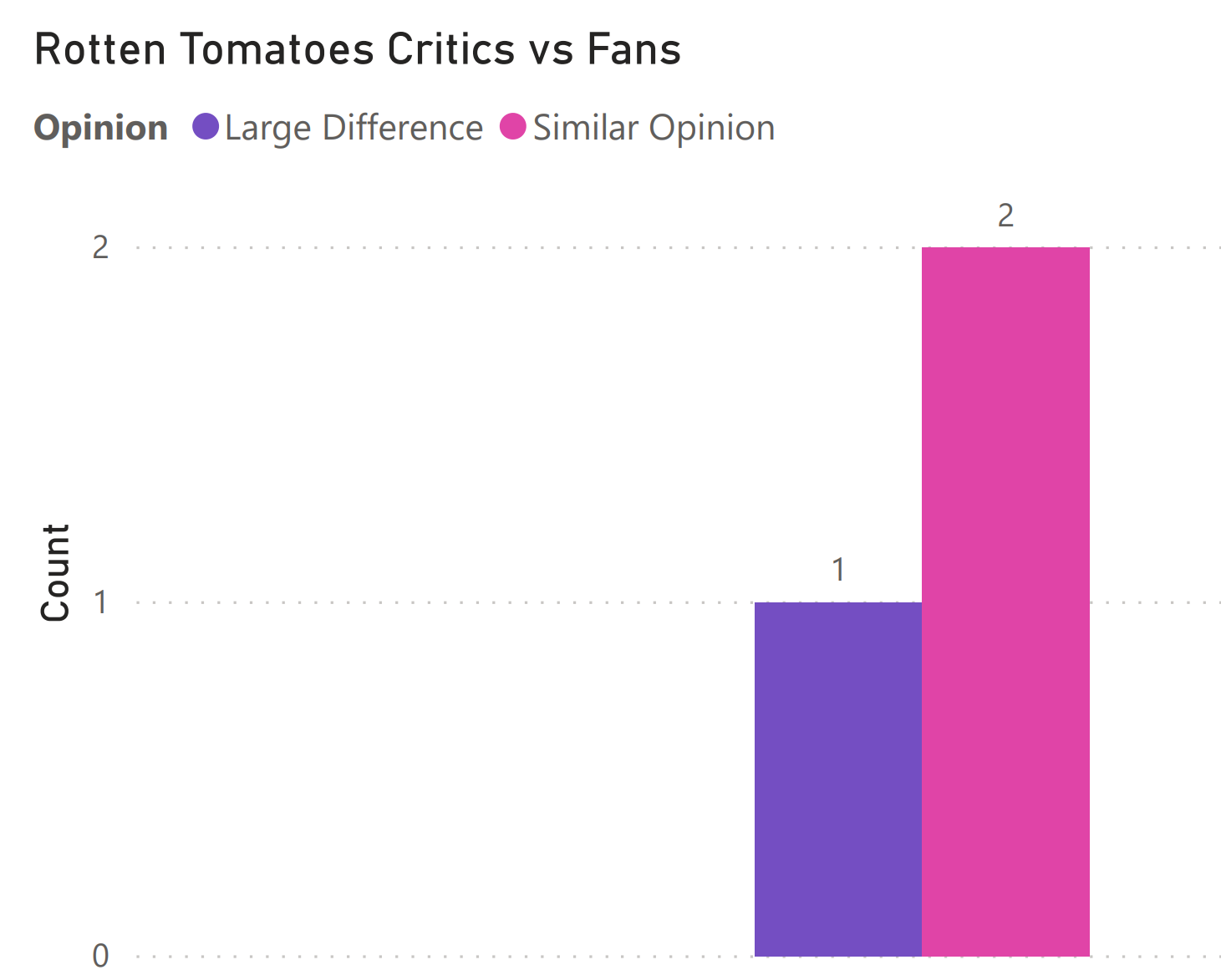 Rotten Tomatoes seems to embrace the differences between fans and critics more enthusiastically, usually (see the tally near the bottom for more information). But this week it’s actually IMDB/Metacritic that does that. Sure, there’s a large difference on Rotten Tomatoes, but there isn’t anything operating on the opposite end of the spectrum. 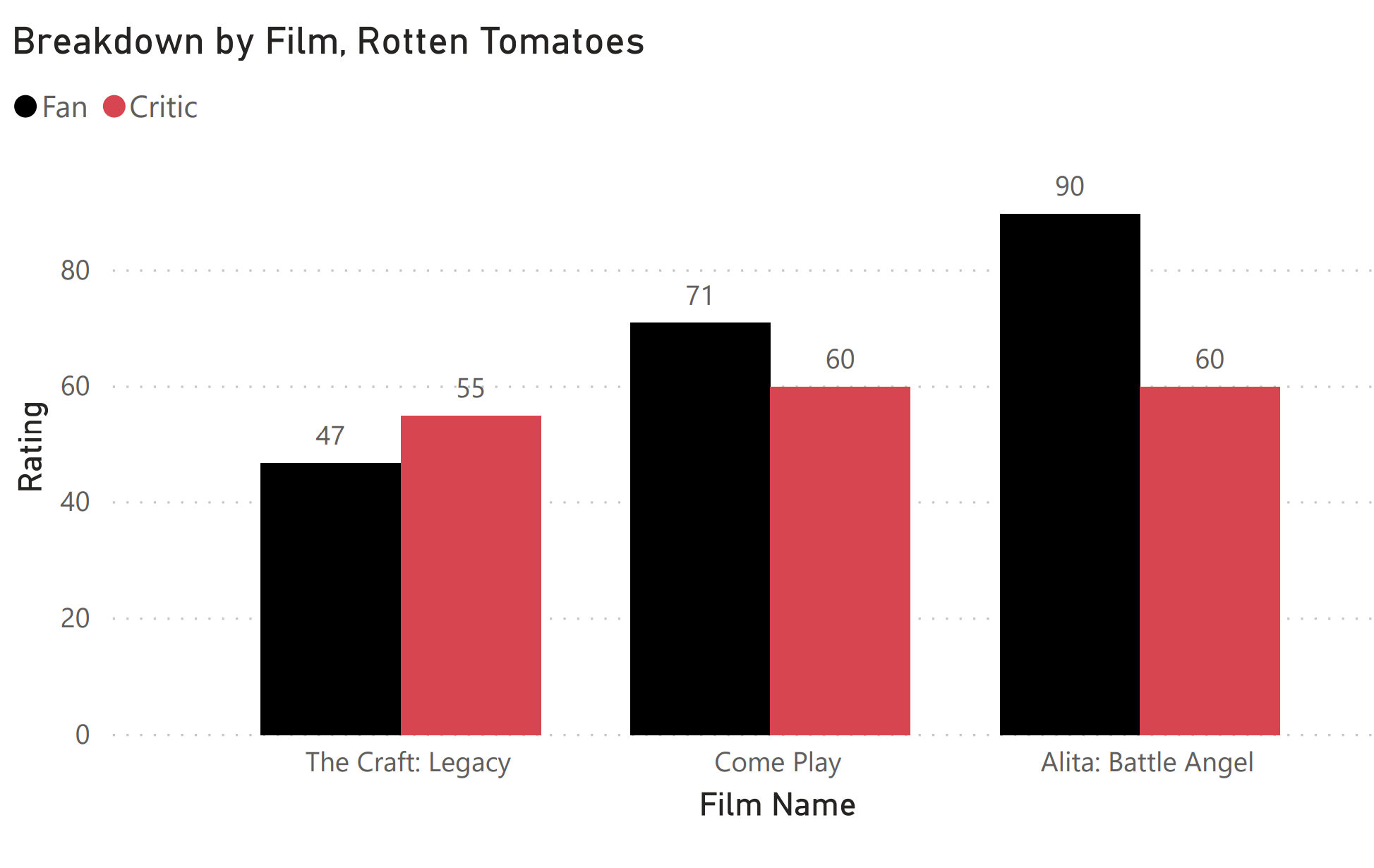 Some things remain as true for Rotten Tomatoes as it did IMDB/Metacritic. The Craft: Legacy is still disliked by fans, mildly enjoyed by critics. Come Play is actually considered a pretty good movie by fans, less so by critics.

Oh boy, look at Alita: Battle Angel! On my scale, a 90 would mean that a movie is amazing. I know that my system isn’t the king of systems–though it should be–but still, that’s a huge disparity in their rankings. I got out my calculator and that’s thirty points!

So while there aren’t any movies that fans and critics have the same opinion on, once again Rotten Tomatoes is more kinetic when it comes to how the numbers play out. Denzel Washington bless you, Rotten Tomatoes.

IMDB: In terms of deciding whether they agree or not, IMDB has the more exciting showing this week. It has both a large difference and a same opinion, meaning that it covers both ends of the line. The variance is higher in that sense.

Rotten Tomatoes: However, when the numbers play out Rotten Tomatoes arguably has the more going on. Sure, it’s got two similar opinions but the large difference is massive.

The Final Verdict: Alita: Battle Angel is bringing da ruckus like it’s Wu-Tang, but don’t sleep on The Craft: Legacy because it’s causing a bit of a split as well.

You Could Leave Now That You Know All This, but if You Want to Watch Me Make Stories Out of How the Numbers Break Down Then Grab Some Popcorn and Stay (Please)

So I see that I’ve guilt tripped you enough to stay! Good, good. Now you can watch as I go into more detail about how the numbers break down. IMDB, specifically, is really decent about providing analysts with how the demographics break down. Rotten Tomatoes is less so but I do have a section dedicated to that as well. Until otherwise noted, I am showing you pages of how IMDB/Metacritic unfolds. 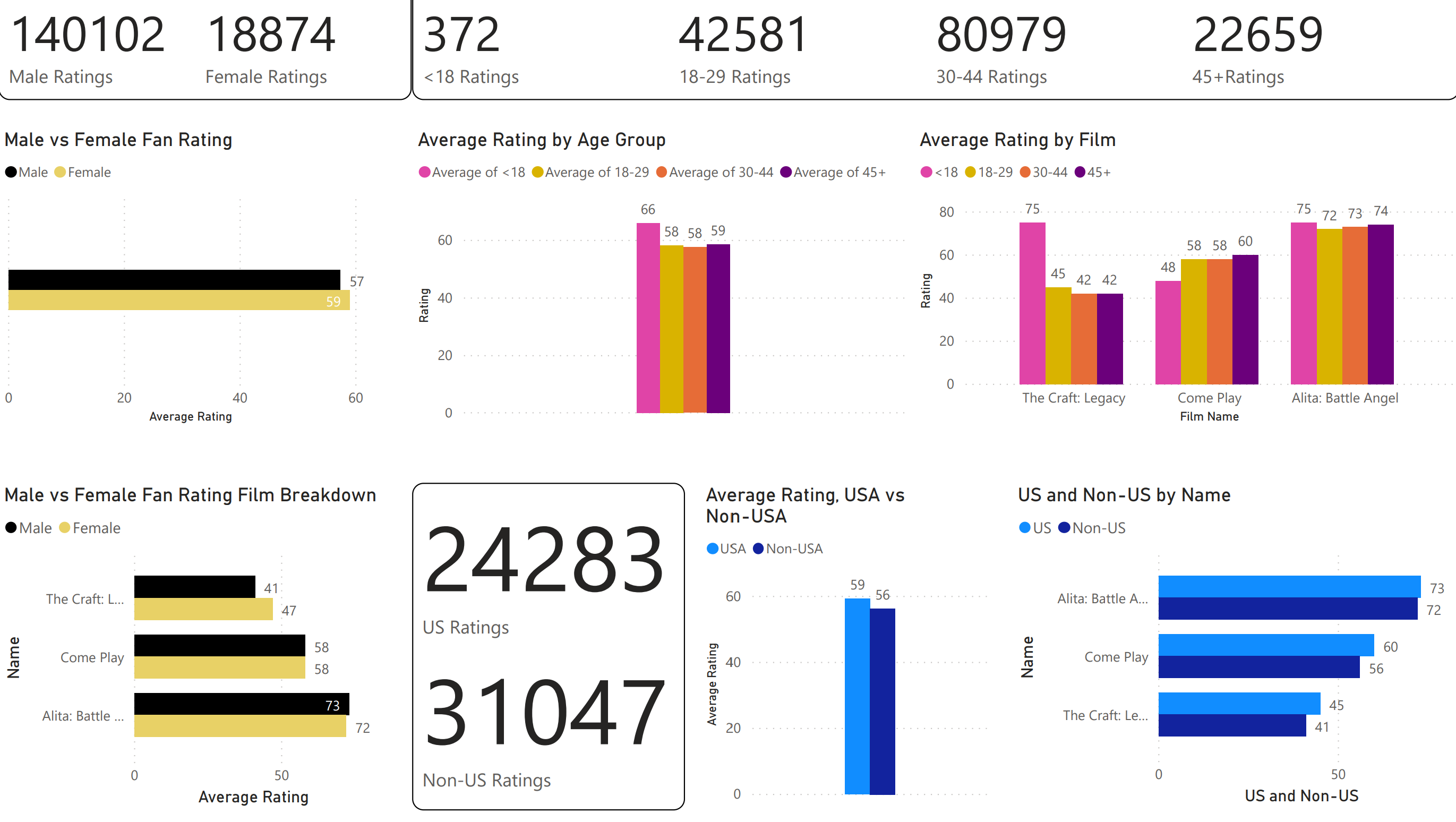 I’ve started including how the number of ratings break down per movie because in the past I have mentioned it but didn’t have the numbers to show the readers.

There’s not a whole lot to say here because everybody aligns pretty evenly. The under eighteen crowd liked The Craft: Legacy a lot more than everybody else but there were also only two people who rated it. Power to ’em. 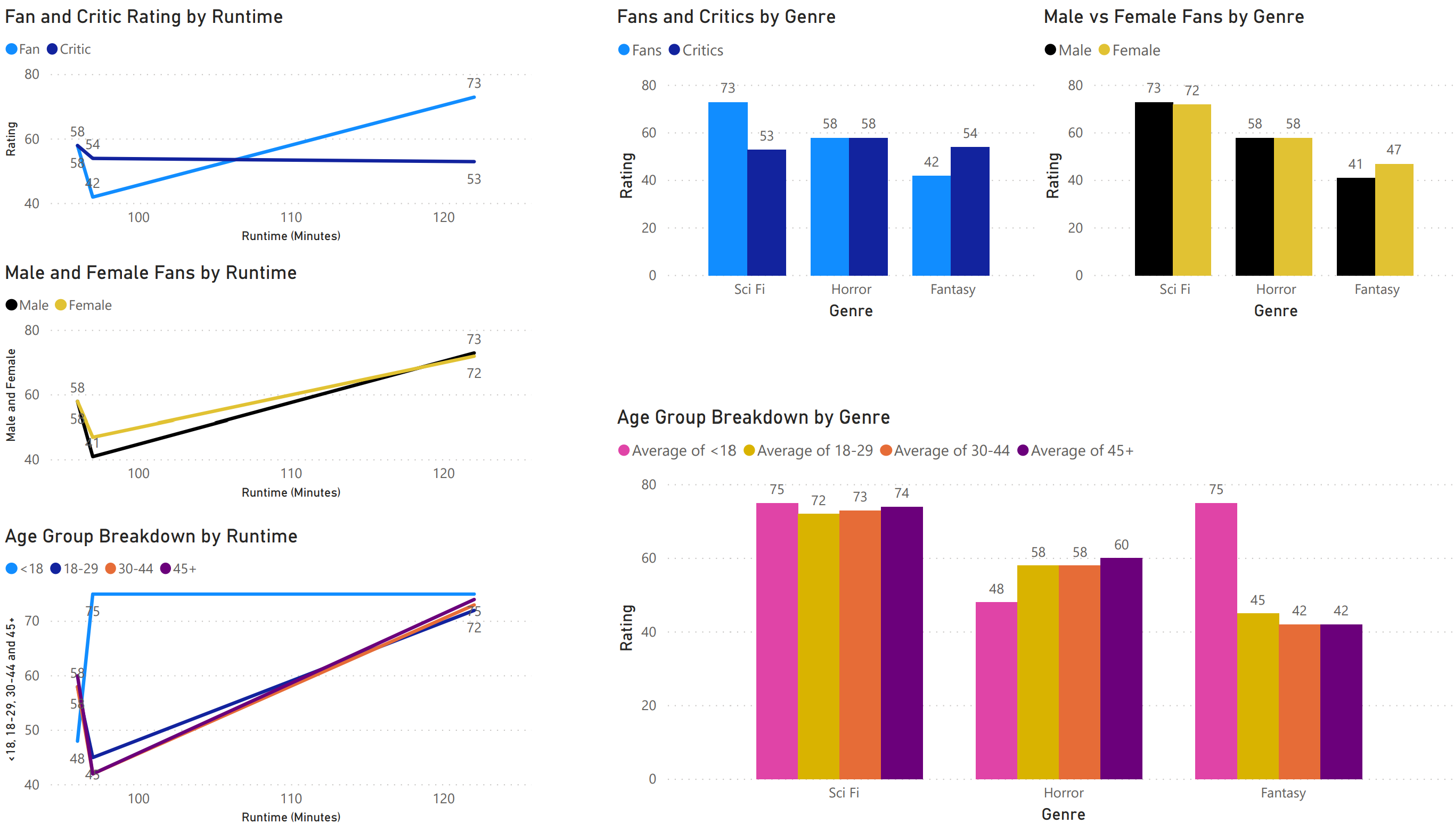 Everybody prefers the longest movie–Alita: Battle Angel–except the critics. Well, the under eighteen crowd is over there being weird about everything but that’s probably just them discovering themselves, man. Youthful rebellion! Up the punx!

Aside from that, everything plays out as expected. Science fiction is the most divisive this week but you can’t really take anything from that. Some people feel that critics are stuffy and don’t like genre picks but I don’t think that’s true. But that’s the beauty of data, you could look at this and misrepresent everything and make that statement! Use my article to spread misinformation. 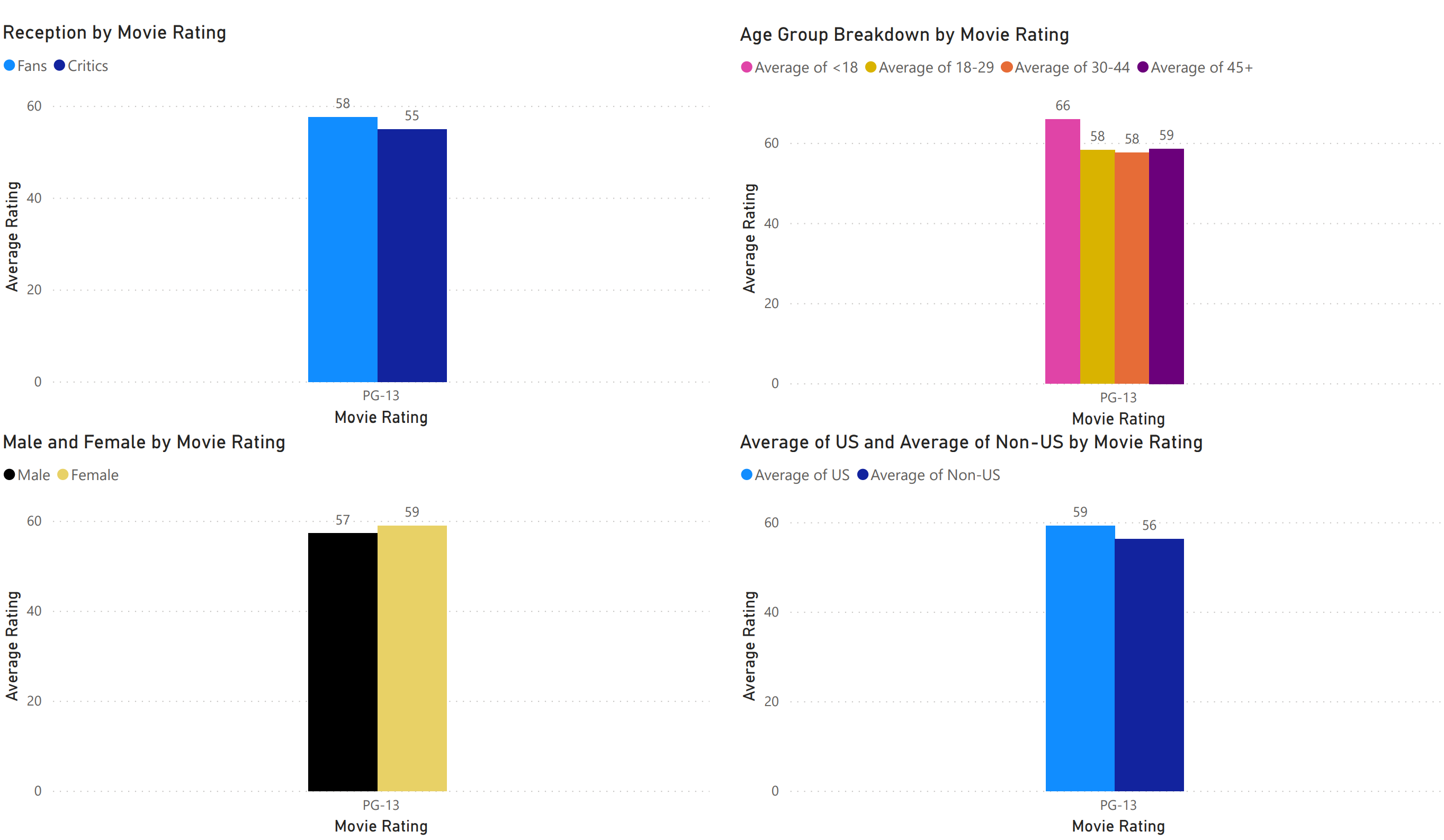 I apologize because this deeper dive hasn’t yielded the most fascinating results, but that’s the chance you take. Sometimes the data tells an epic tale and other times it’s 50 Shades of Grey or [insert your most hated novel of choice here].

It didn’t dawn on me that all the movies are PG-13. That’s a rarity, normally there’s an R-rated flick sprinkled in there and I make a joke about how the teenagers shouldn’t even be going to see it. I still managed to reference that! This is truly a masterclass in creative writing. James Joyce, eat your heart out. 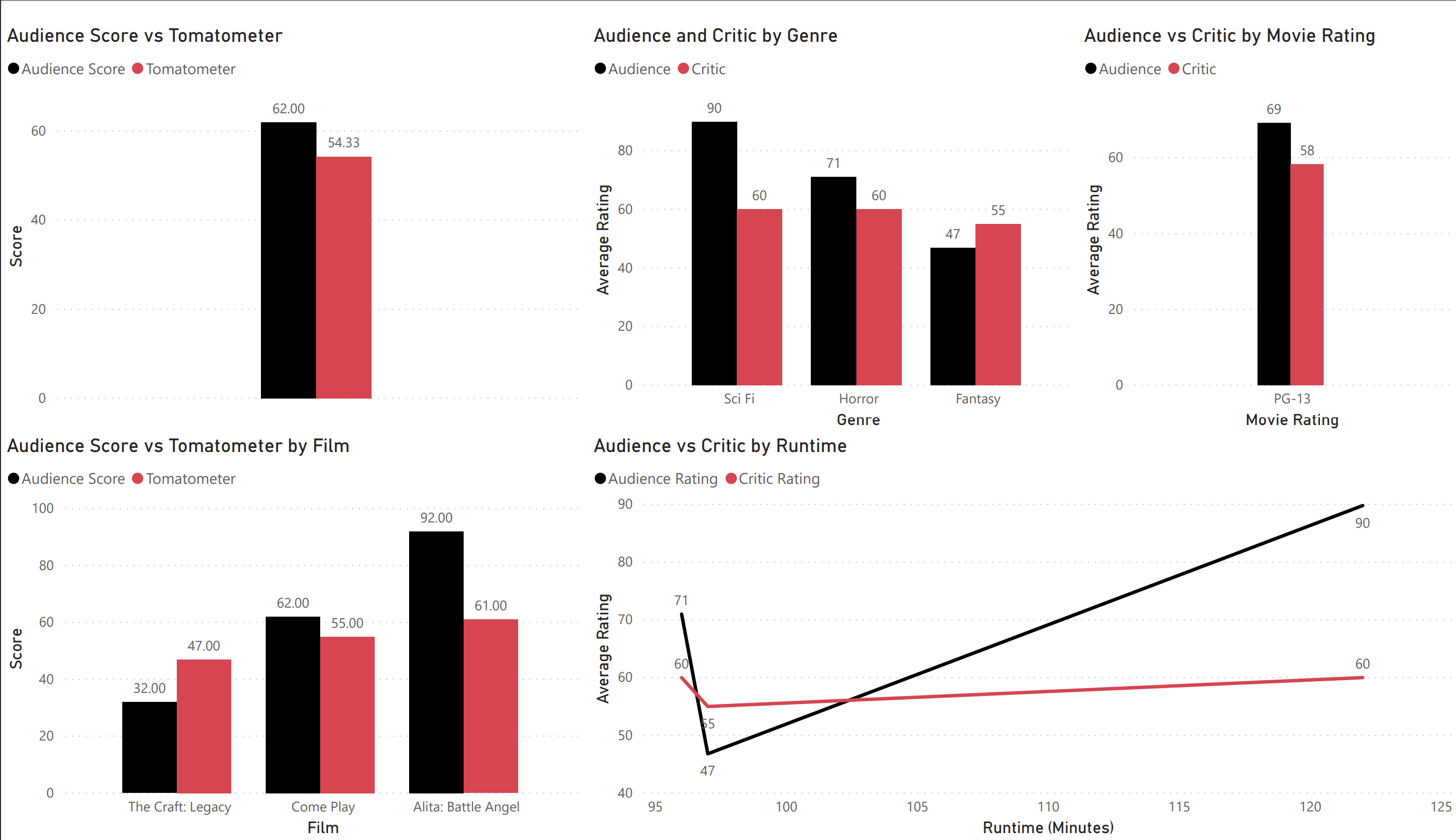 We close out the deeper dive by returning to Rotten Tomatoes. Usually this produces more alluring developments because I include the Tomatometer and the audience score–metrics that are unique to the actual average ratings that fans and critics give. How is that?

On the left we see the Tomatometer and the audience score. Across the three movies released, the consensus seems to be that they’re worth watching at the very least. It isn’t until we drill down into the specifics that we see how The Craft: Legacy isn’t recommended by anybody. It walks a lonely road, the only one that it has ever known…

Besides that, things shake up as normal. Science fiction rules the day for the audience and ties for horror with the critics, and in general the audience is more forgiving than their movie adversaries.

Source: Focus Features. I have no words.

IMDB keeps increasing its lead in agreements, while Rotten Tomatoes follows the leader. Rotten Tomatoes still has a few more disagreements than its counterpart, but they are almost identical when it comes to the amount of times that the critics and fans have a similar or slightly different opinion.

However, of note, is how the extremes unravel. When operating under those parameters, Rotten Tomatoes is a lot more negative where IMDB is a lot more positive. IMDB has four more same opinions, whereas Rotten Tomatoes has four more large differences. Four doesn’t seem like a lot, but considering how infrequent both of those are my prediction is that those are always a point of contention between the two websites. Only time will tell.

Source: Sony Pictures Entertainment. With Alita sucking up all the oxygen we can just slip in there silently.

So that’s it for another week, I hope you enjoyed it and maybe even discovered something about yourself along the way. If not, that’s okay, I’m not a psychologist or a motivational speaker.

Do you have any questions, comments or concerns? You can let me know in the comments below, or you can yell into the wind and depending on the distance between us, I might hear you. If I can’t, my bunny probably will because he hears everything.

I hope you tune in again next week for another Friday Feud, and have a great day.

This guy was uncredited in Alita but he was there in that one scene where the stuff happened a couple times.