Friday Feud: Let Him Go and The Informer.

Click here to read the disclaimer to see the more elaborate description about what I’m doing here. I don’t want to waste the time of returning viewers by constantly describing what Fans vs Critics is in great detail, so it’s easier just to include this disclaimer. This is the November 27, 2020 edition of Fans vs Critics.

Once again we’ve hit a Friday–funny how that works–so that means that while other people having drinks, I’m here posting articles about whether fans and critics agree or not. Why do I do this? Because it’s fun, mostly, but I became intrigued by seeing so many people talk about the subject.

Is there an animosity between the two groups? Well, one could take all of the data from IMDB, Metacritic and Rotten Tomatoes over time and give a response to that. There have been analysts who have done so, and while there are caveats to that, it’s still interesting. With Fans vs Critics: Friday Feud, I wanted to make it more specific: I take information from those three resources mentioned above but I dissect it on a weekly basis. This is done because I want to see how fans and critics differ on their initial reactions. Of course this can change over time! But articles get written around release date more often than not, so I wanted to capitalize on that as well.

So what I do, in a nutshell, is compare the data of movies released three weeks ago, in order to give fans a little bit more time to rate them. This doesn’t always work in my favour since the sample sizes are small, but it’s a silly little game I play. It can tell you something, but it can’t tell you everything. I compare IMDB and Metacritic since IMDB provides fan reactions and links to Metacritic for critical response; then I compare Rotten Tomatoes separately since it provides both on its own website.

If you’ve been here before you’ll realize that I don’t mean for this to be dry. I try to make it entertaining and exciting, even if there is an abundance of charts. Hopefully I’m successful in that endeavour.

This week is smaller than usual. I wanted to include Jungleland but there weren’t enough votes on Rotten Tomatoes for it to have an audience rating. So it’s just Let Him Go and The Informer. Everything is civil between fans and critics on IMDB and Metacritic, at least according to my scale (which is explained in the disclaimer). It’s not quite a love fest since one is only a similar opinion, but it’s pretty close. Now we just need the breakdown by film. 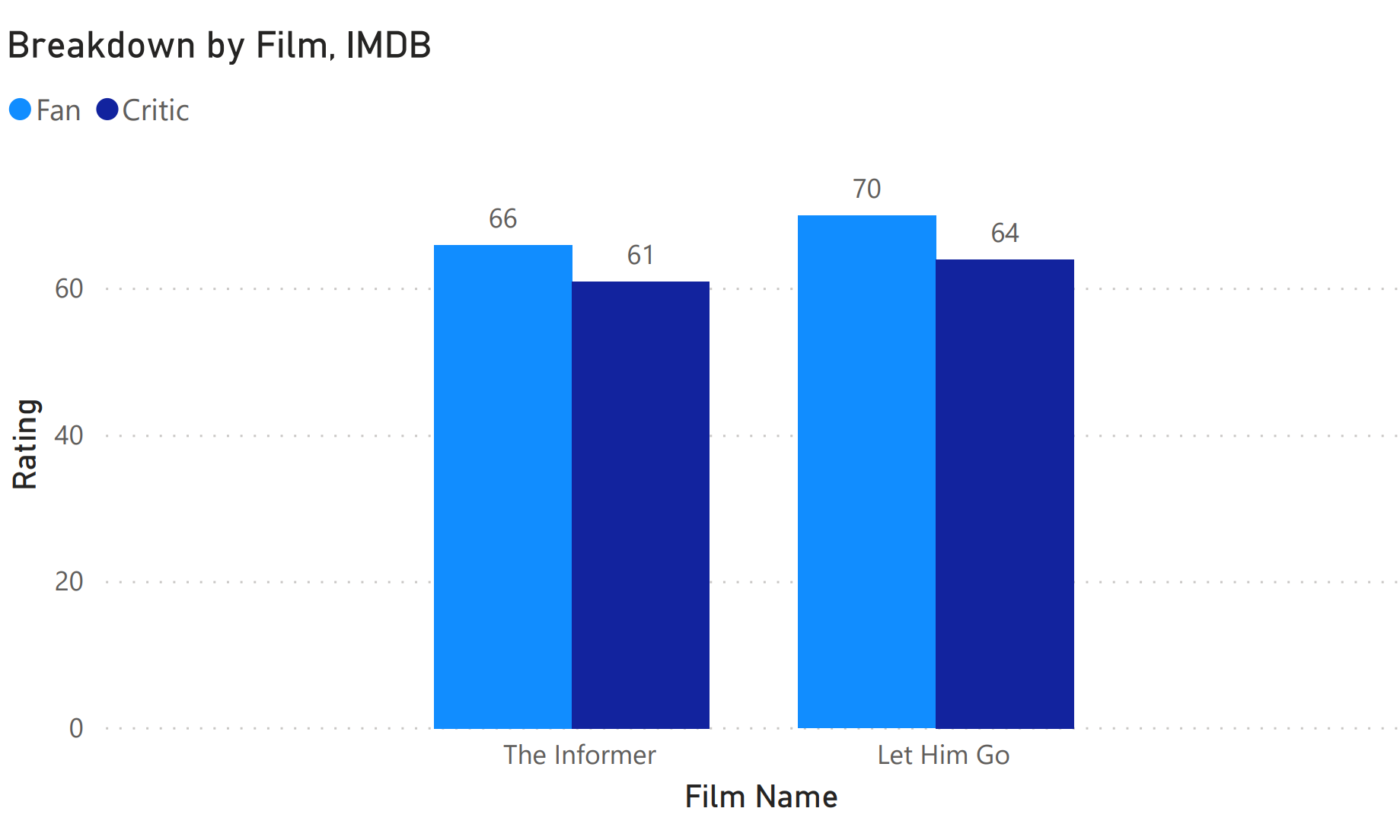 The Informer was the same opinion shown above and Let Him Go was literally only one point away from following suit. One could say that the relationship in regards to The Informer is not icy–yeah, we’re doing Snow references all day here now. 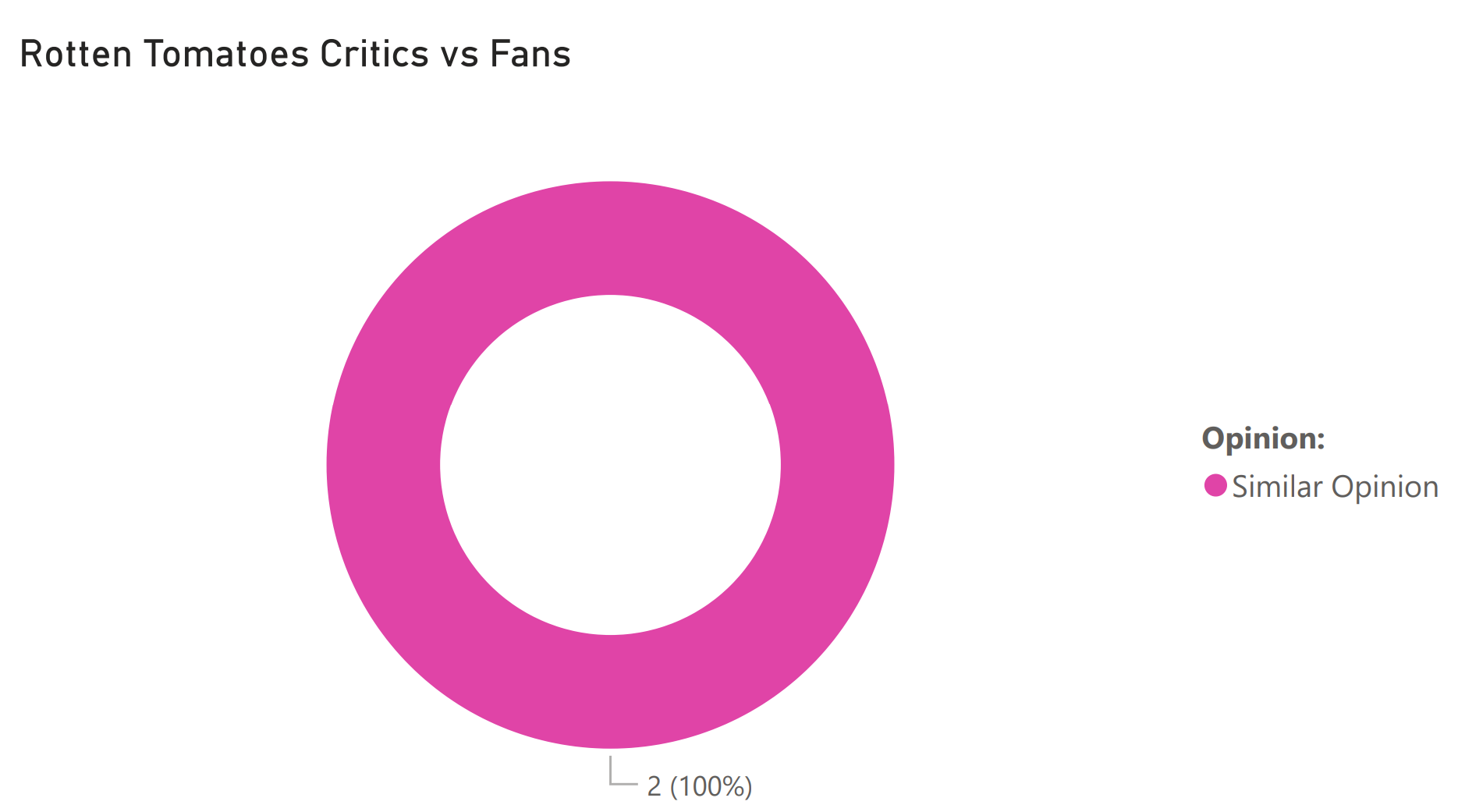 The people who frequent Rotten Tomatoes and the critics counted by the tomato also agree! How lovely! Is this really the time of healing that people want these days? Let Him Go isn’t that close to changing from similar to different, but The Informer is a measly two points away. There’s a chance of flurries but it’s ultimately sunny between the two camps.

I wish there was more to say but due to there not being that much activity I’m stuck making lousy jokes.

IMDB: It comes very close to fans and critics having the same–within five points of one another–opinion but it doesn’t quite get there. That would have been more interesting.

Rotten Tomatoes: Then we have Rotten Tomatoes, which can usually freeze the hearts of fans and critics to some degree. But even the great tomato can’t manufacture an interesting narrative, although it does come closest.

The Final Verdict: Let Him Go is clearly the better movie of the two, but the difference isn’t large enough to really matter.

You Could Leave Now Pretending That There’s No Conflict in the World Because This Article Has Shown No Real Disagreement Between Warring Factions, but Stick Around and There’s More to Talk About

Ah, you’ve stuck around. Excellent, now let me throw some more numbers at you. If you like what you see, baby don’t be shy, because we have a more in-depth breakdown of the numbers. IMDB is awesome in that they provide a lot of data to attain easily, whereas I’ve only dedicated one additional page of information to Rotten Tomatoes since it’s stubborn.

Until otherwise noted, these charts all reflect IMDB and Metacritic. 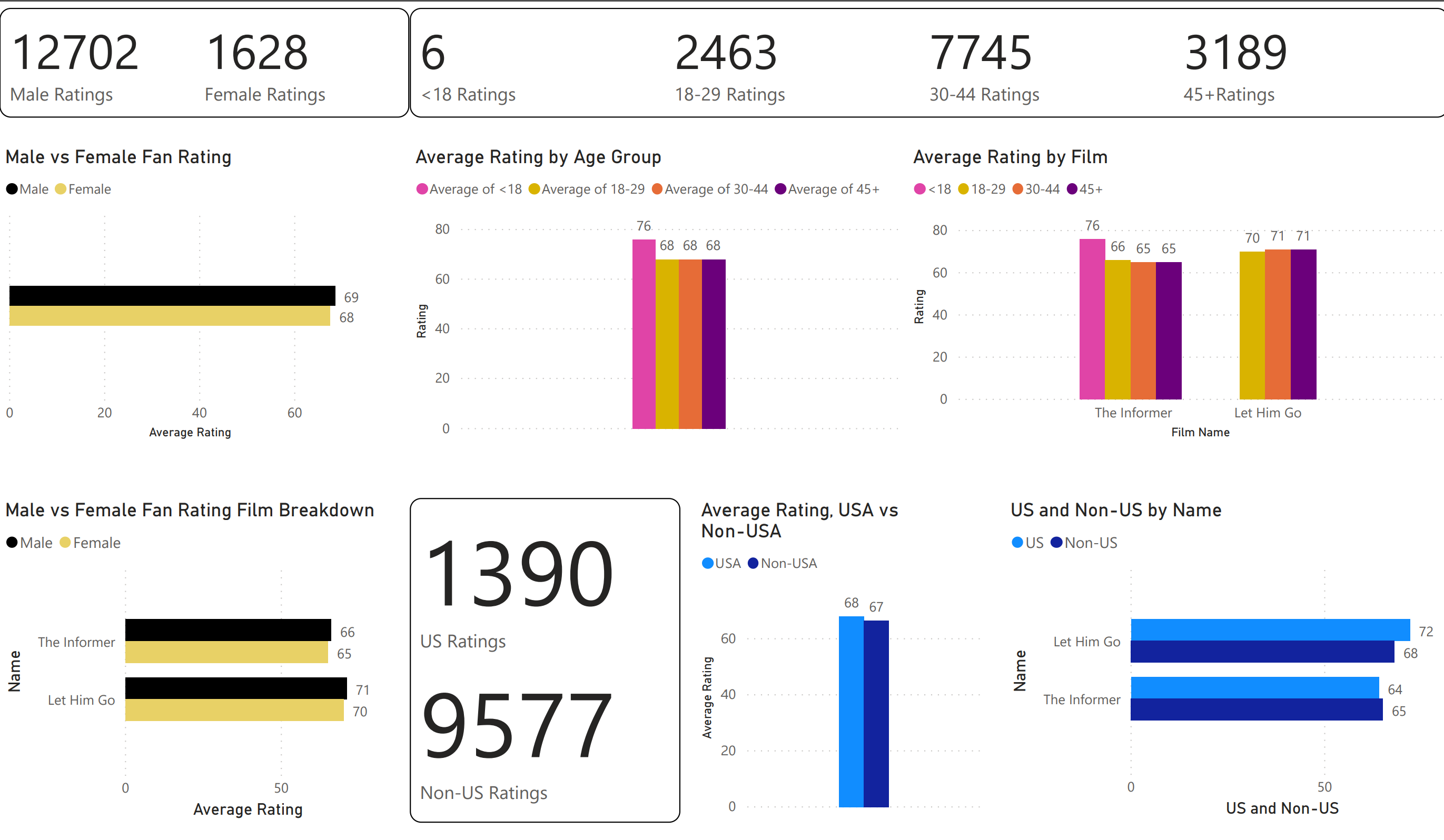 If you have followed this series then none of the charts on the first page up there will surprise you. The numbers basically align with one another, which is not uncommon since the age groups and sexes may show a little bit of difference but usually nothing substantial.

The under eighteen crowd shows the most movement but that is generally because they vote the least. Whether that’s because they can’t afford to see movies–that’s an obstacle that is less likely this year, however–or because they are young, wild, free and don’t need to vote, I don’t know.

I started including the rundown of how the votes pan out, which is the second page right below all the graphs. You’ll see that for Let Him Go, there’s not a single <18 that voted. That happens sometimes. The only other interesting tidbit that I see is that there’s a rare occurrence where for Let Him Go, more people from the USA voted than from outside the USA. If you only performed a cursory glance at the runtime charts on the left side then you might think there’s a huge contrast between the reception in terms of length. Then you look at it and you realize that the one movie is only a minute longer than the other, so while there’s a decently steep incline, you can’t really say that the runtime matters. This is how charts can mislead you, folks. Don’t trust me.

Aside from that, everybody agrees so much that it’s almost sickening. I’m not sure what that says about me. I think with this section I’ve only revealed how terrible I am. I’ve only included this page of charts for posterity. If you can find anything remotely absorbing about what you see here then you’re a better person than me. Let’s just sit here and enjoy another hit from the 1990s.

Now we move onto Rotten Tomatoes to close this “analysis” out. I put analysis in quotation marks because anybody can do what I’ve done–I made monkeys do it for me so I could go watch Chernobyl, which I’m finally getting around to watching. If you went by this you would think that the audience likes R-rated movies more than critics since the average is higher. They also like Westerns more and I’m not sure if that’s surprising or not.

Usually the Tomatometer/audience score comparison on the left half breeds the more potent results, because the Tomatometer and audience score do an accurate job of showcasing the average rating of each movie only show the percentage of fans and critics that give each movie a passing grade. So this means that a movie could be the most mediocre piece of art ever committed to the world of cinema and if every critic mildly enjoys it than it could get a 100%. It’s unlikely but it could happen. That’s why a 90% looks amazing but should always have an asterisks attached to it.

For example, are you telling me that Starred Up should be seen with the same level of exuberance as The Third Man?

No, of course not!

For the record, I really dug Starred Up. 2014 was the year that Jack O’Connell featured in that and Unbroken and I felt that he was one of the best actors of that year–I declared that he would go on to make a name for himself. I mentioned Starred Up in particular because O’Connell is in Jungleland and I didn’t get to talk about it. O’Connell is my boy.

Source: Warner Brothers. “I’ve not been impressed by you.”

With every week that goes by it appears that we are inching farther and farther away from being able to make the claim that fans and critics disagree. With IMDB/Metacritic it’s been a lost cause pretty much from the outset. On Rotten Tomatoes it was actually close for a while before we apparently ran into a group of movies that aren’t dividing us.

We are now tied up when it comes to similar opinion. Rotten Tomatoes still has the most disagreement, especially on the tail ends; it has the fewest same opinions and the most large differences.

That’s it for another Fans vs Critics. Come back again next Friday to see me run through this all again with a few different movies.