Fans vs Critics–October 16 2020: The Glorias Causes a Minor Dilemma

Friday feud: The Glorias, Save Yourselves!, Possessor: Uncut, Dick Johnson is Dead.

Click here to read the disclaimer if you want a more detailed explanation about what the Fans vs Critics series is. I link to a different page just so I don’t have to waste the time of repeat visitors.

Welcome again to the weekly fight that is Fans vs Critics. Each week I take a few movies that were recently released and I compare the reception on IMDB, Metacritic and Rotten Tomatoes. I do direct comparisons of the fans on IMDB and the critics on Metacritic since IMDB links to Metacritic. Rotten Tomatoes is self-sufficient and includes both so I can compare fans and critics right on their site. Don’t worry: even though it’s heavy on graphs and numbers, I try to make it light-hearted and fun.

You’ll notice that the movies are a couple weeks old–that’s because I wanted to leave some time for the fans to rate the films. This doesn’t mean that reception can’t change over time but I am curious to see what the people think who rush out to see them when they are first released.

It’s a Love Fest on IMDB/Metacritic 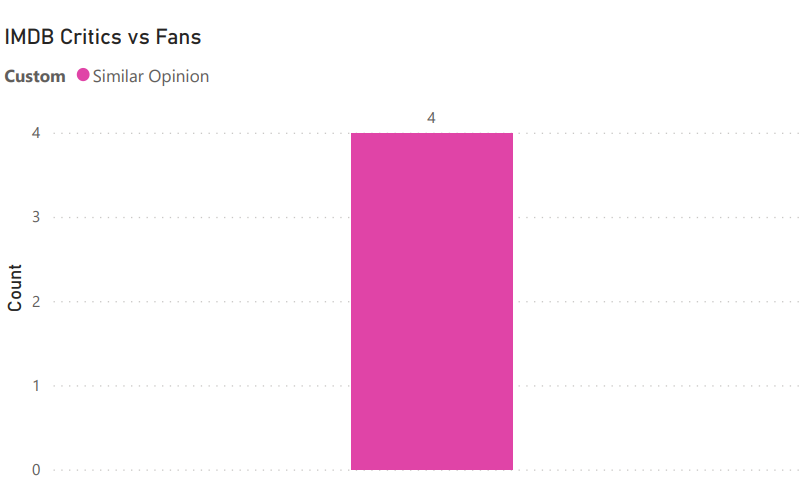 By the way I decided what qualifies having a similar opinion, it seems as if the fans and the critics team up this week. There’s no real disagreement there and the only way it could be more harmonious is if they had the same opinion. That’s boring.

So the only thing left to do here is to break it down by film to see what’s up. 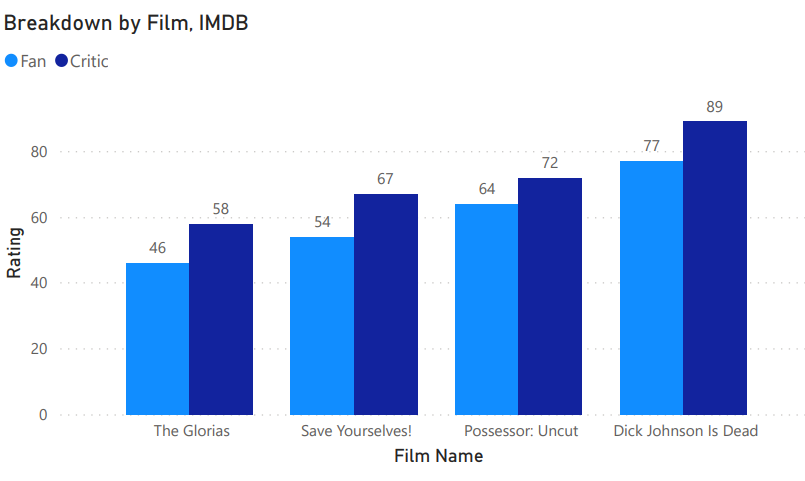 The critics like all of the movies more than the fans this week. On top of that, there are a few times where there’s a threat of a fight breaking out–a difference of fifteen points qualifies as a slight difference of opinion. To those who wanted blood, we almost got it.

The Glorias is a difference, however. If you consider a fifty as a passing grade then the critics liked it and the fans did not. So even though they have a similar opinion numerically, they don’t in this regard. Yay numbers!

What the Crap, Man. It’s a Love Fest on Rotten Tomatoes Too Normally you can count on Rotten Tomatoes to shake things up a little bit. It appears that on that website they always have their knives out. Except today, I guess. Must have been a ceasefire. But we don’t want truces here, do we? Don’t we have a narrative to sell?

Let’s break it down by film to see how we can manipulate a fight. Even though on average there’s less of a numerical difference in opinion on Rotten Tomatoes, they make up for it by alternating on who likes which film more. They break even in that way.

Critics when seeing the outpour of love from fans.

IMDB: The night is calm and the children are asleep. The fans and critics agree on everything.

Rotten Tomatoes: IMDB/Metacritic set off a chain of events and Rotten Tomatoes doesn’t want to be seen as the rambunctious neighbour. For one week, anyway, all is well.

The Final Verdict: It’s a little heartwarming to see the fans and critics getting along. But then again, acid reflux/heartburn is also heartwarming in a sense. So… yeah.

You Could Leave but Why Not Lay Down and See a More Detailed Breakdown?

You could close your browser right now if you wanted since the serious work has been done. But if you want to see a little more about how the demographics break down–plus see a final tally of the results since I began doing this–then stick around. Until otherwise noted, these charts were made possible by the dataset collected from IMDB/Metacritic.

There are five main points here that popped out instantly when looking at the data:

I analyze the data as I’m writing this and I’m surprised by The Glorias being the most notable release. It’s basically fuelling this article. 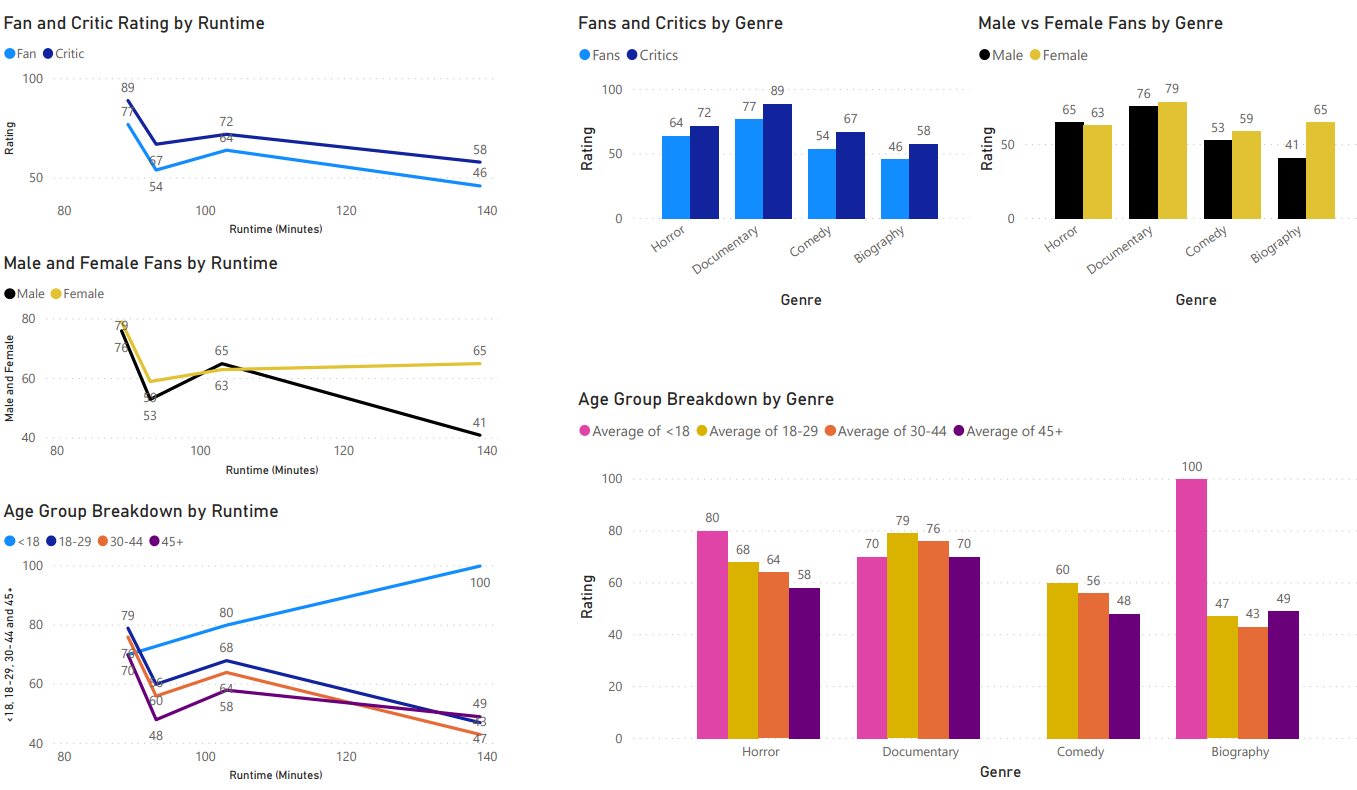 The only point of interest I notice here, though you may find others, is that nobody likes the longer movie. Except the two <18 who loved The Glorias, baby! 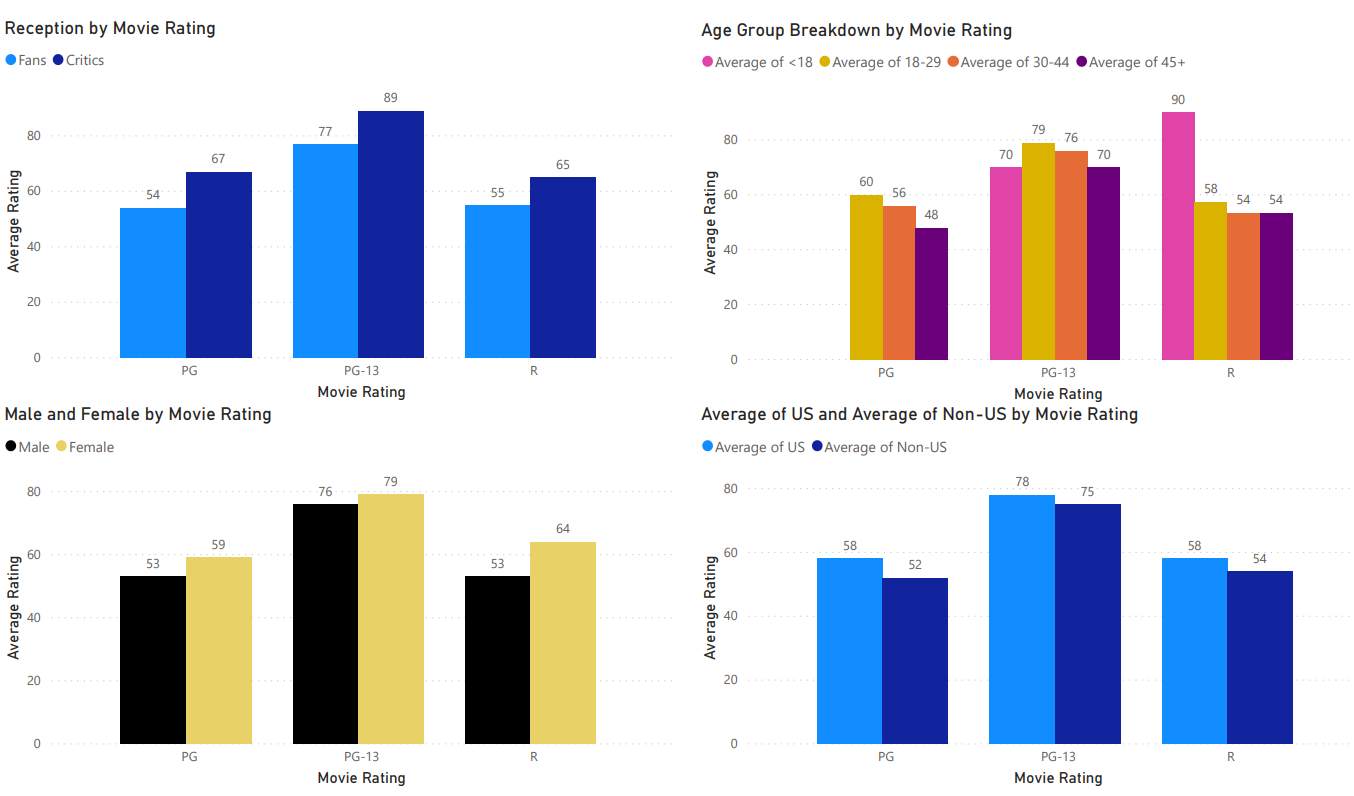 PG-13 wins the day this week, except for those pesky teenagers who prefer to sneak into–okay, probably stream since there’s a pandemic going on and everything is online–R-rated movies. This is a consistent theme in this series, to be honest. 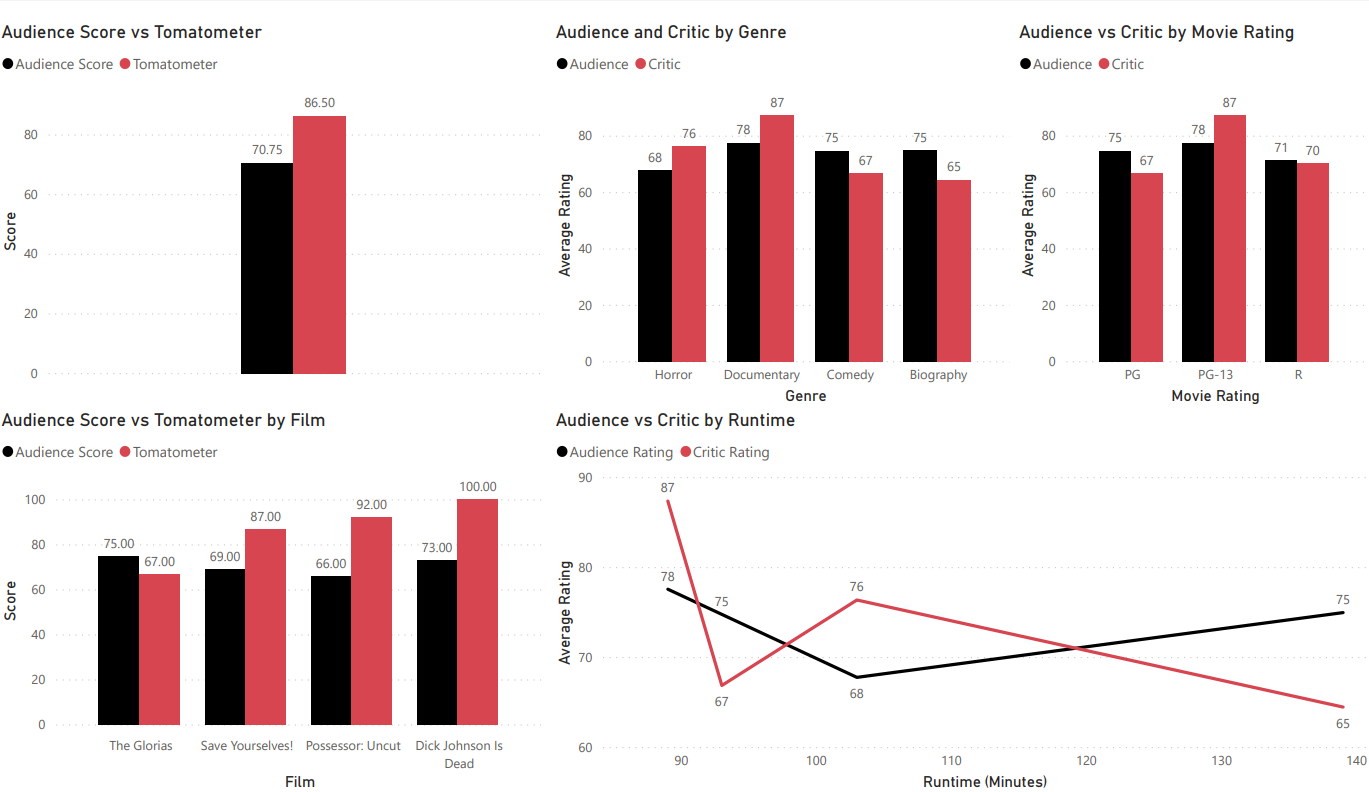 This final page of graphs is for Rotten Tomatoes.

Take a look at the “Audience Score vs Tomatometer by Film” chart for a second. You’ll notice a first in Fans vs Critics history: a flick has a 100% on the Tomatometer! Dick Johnson is Dead is slaying over here! That means it’s a perfect movie, right?

With that said, Dick Johnson is Dead is still the most positively received film by both fans and critics on Rotten Tomatoes this week so it’s probably worth your while.

All in all, even though there weren’t any huge releases included in this instalment, they all appear to be pretty good, judging from the Audience Score/Tomatometer and the average rating. See? You don’t need big blockbuster movies to have a good time.

With the tally we see that fans and critics agree more than they disagree on both websites. Most of the action happens in the “similar opinion” category, but “small difference” is also close. You’ll also notice that the extremes are interesting. Fans and critics are more likely to have the same opinion on IMDB/Metacritic and are more likely to hate each other’s opinions on Rotten Tomatoes when they do disagree.

But mostly, at least in recent times, fans and critics more commonly tolerate each other and even hug once in a while. So cute.

Have you noticed anything that I didn’t point out? Feel free to let me know in the comments below. I enjoy doing this every week and I hope you come along with me for the ride as it continues.

Could this be one of the people who rated The Glorias?

Kajillionaire Creates a Small Disturbance So the FANS Fight the CRITICS on October 9, 2020