Click here to read a disclaimer that explains this more so I don’t have to waste too much of your time if you’re a returning victim reader of this series.

Hello friends and enemies, and welcome to another edition of Fans vs Critics: Friday Feud, and I still like the Friday Feud subtitle so I can’t drop it. If you’re new here let me quickly tell you what this atrocity is: every week I take a few of the movies that have been released over the past two weeks and I compare the reception between fans and critics. I compare IMDB’s average rating (fans) and Metacritic (critics) because IMDB links to Metacritic. I also use Rotten Tomatoes and compare the critics and audience there.

If you’re wondering why the movies aren’t the newest releases that came out this week, that’s because I need to allow some time for fans to rate the movies. I figure that the hardcore of the hardcore will go in the first two weeks. These numbers could change drastically over time but it’s still entertaining to see first impressions, even if the numbers are usually relatively small. After all, many websites run features when a controversial movie comes out, so why should this be any different? Joining the crowd is fun.

One last thing before we begin. This is just meant to be fun and silly. I tell a story based on whatever data I have, but I don’t mean everything I say to be completely serious. It’s likely that I haven’t even seen most of the movies each week, so I make wild accusations for comedic effect on occasion.

Okay, let’s get down to brass tacks. We will start with IMDB/Metacritic.

In a Deeply Polarized World, Maybe IMDB Is Trying to Heal It 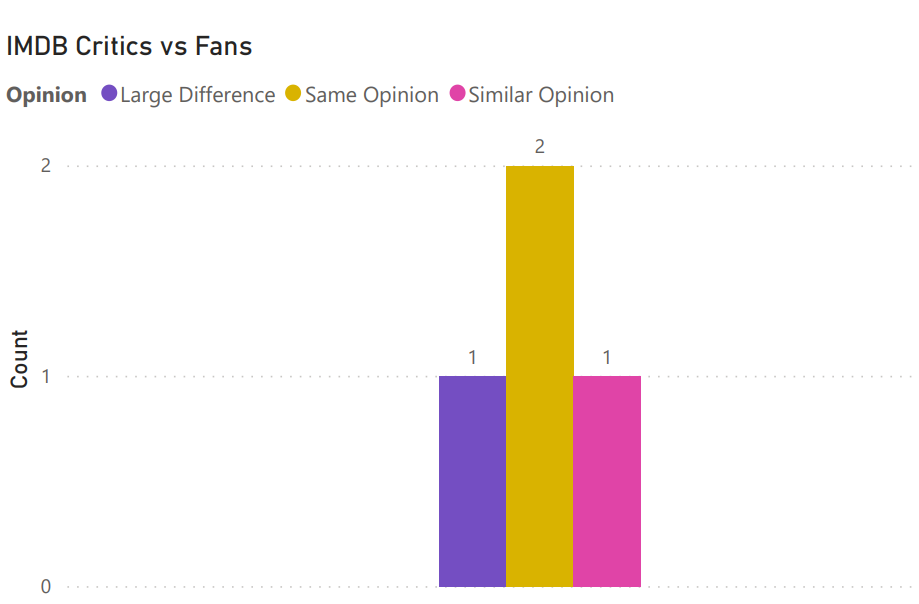 While the reception on IMDB/Metacritic follows a similar, boringly positive pattern that has been laid down over the last month, it does come close to hitting every mark. We have a similar opinion, two same opinions and a large difference in opinion. We are only missing a small difference of opinion. Even still, we don’t always get two movies in which the opinions are what I classify as the same opinion (within five points of one another).

And because I always point this out: the chart is giving us the finger. 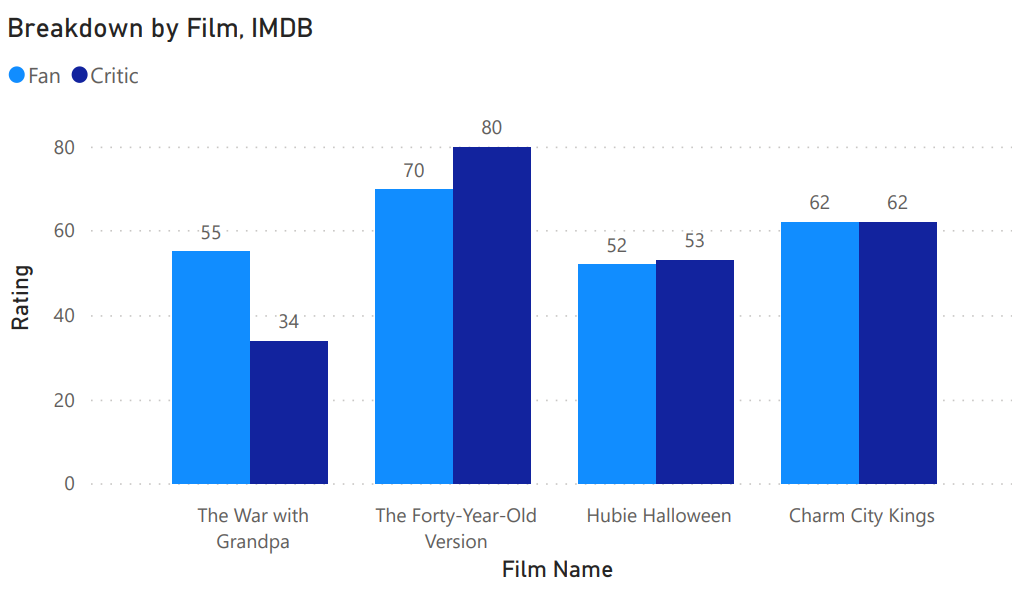 When broken down by film, one of the most notable points is that Charm City Kings has exactly the same ratings for both fans and critics. It appears that HBO Max isn’t polarizing people this time.

On the other side of the fence The War with Grandpa is notable because not only is there a big separation between fans and critics, it actually crosses worlds. What do I mean by that? Probably something more simplistic than you might think, and also something I probably could have worded better. All I’m trying to say is that not only is there a large difference, if you consider 50 the passing grade then the fans give it a mild recommendation and the critics mildly dislike it. Sometimes you get a difference where both sides still like the film, just one likes it less. This isn’t that, but I’m not surprised either.

The War with Grandpa Also Brings the Pain on Rotten Tomatoes 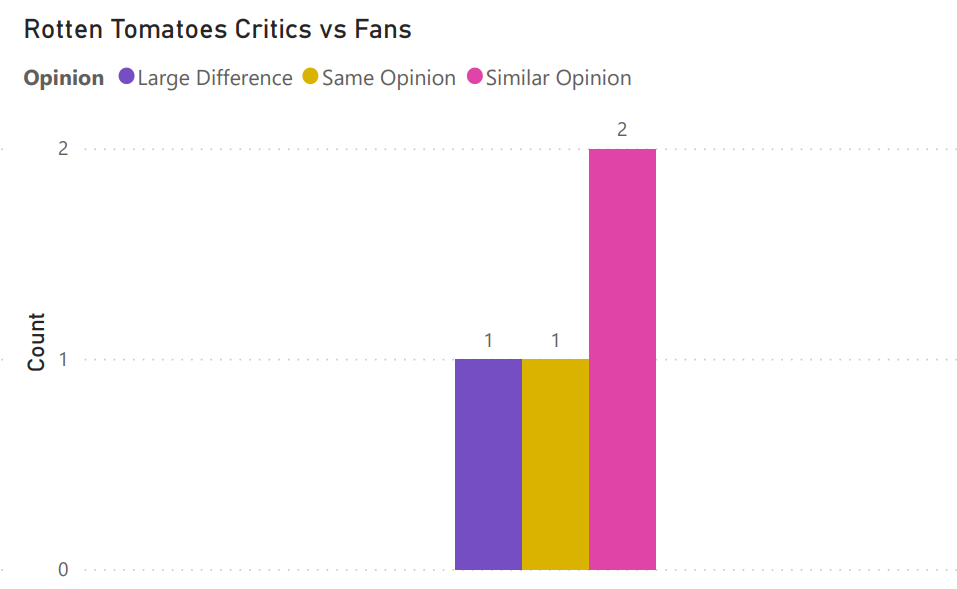 It’s that time of the day where we move onto Rotten Tomatoes. Historically–I mean over the past month since this is a new series–Rotten Tomatoes has been the source of much feuding and entertainment. Here they are basically the same as IMDB, only instead of two same opinions, they have two similar opinions. 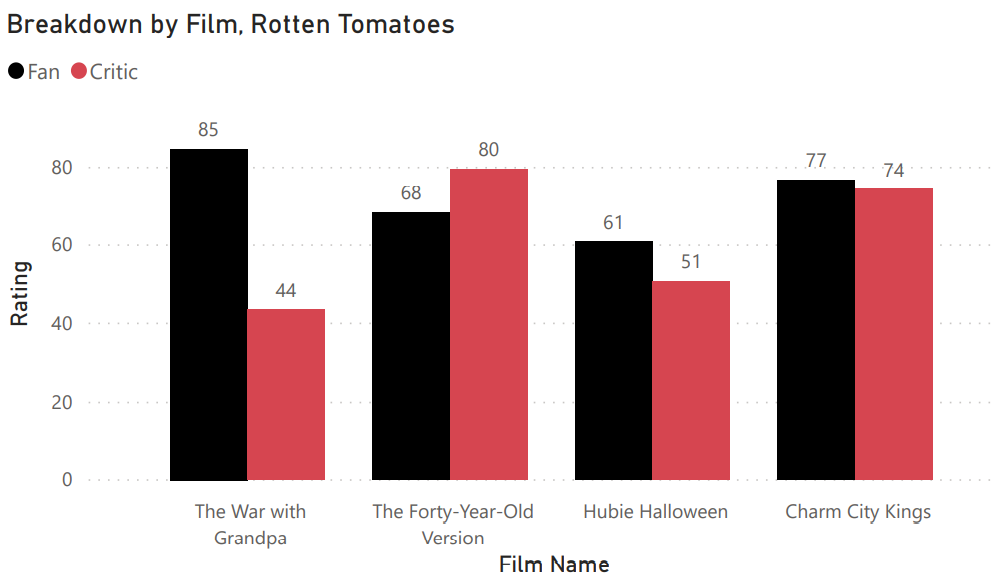 This is proof that when you see a chart/graph, always dig deeper. On the surface the action was very close to what IMDB was offering, but when you break it down by film there’s a little bit more to get into. Mind you, it’s not that much but there is still more variety in the ratings.

Look at how much of a clash there is over The War with Grandpa! I know IMDB/Metacritic had the same conflict, but this one is huge. The war with fans, am I right fellas? Or is it the war with critics? Why am I giving this so much thought?

IMDB: The War with Grandpa is where the excitement is. It’s a little silly when you think about that in terms of the title. How is a war with grandpa exciting? It seems cruel.

The Final Verdict: I would love to say that there’s some solidarity–for the most part–among fans and critics, but it comes with the caveat that the difference comes from an assault on senior citizen homes. Why do you hate seniors, critics?

This Could Be the End for You (Not a Threat) but if You Want to See Me Go Into More Detail, Read On

Now’s the time that I look a little deeper into what the numbers are saying. IMDB is especially good for this because they make a lot of information readily available. Rotten Tomatoes is a little more stubborn but there’s still a page dedicated to it. Until otherwise noted we are looking at IMDB/Metacritic numbers. There are two details worth mentioning here. The first is that for Charm City Kings, the reception difference between the USA and the rest of the world is actually rather significant. Normally they are within roughly five points of one another, so to have a full ten points is just amazing! Wow! Most exciting news of the year by far.

The second is the reception of the <18 crowd towards The Forty-Year-Old Version. And by crowd I mean one person. I don’t include the amount of votes per movie per age group, but as of writing this it is one person. I’m really happy for you person, because clearly you found something to love in this movie–and I would assume that it being rated a 10 would make it one of your favourites. That or it’s the director. Or the parent of the director. Or you.

Um, so… yeah, I guess we move onto the next sec–

–ion, which is a breakdown by runtime and genre. 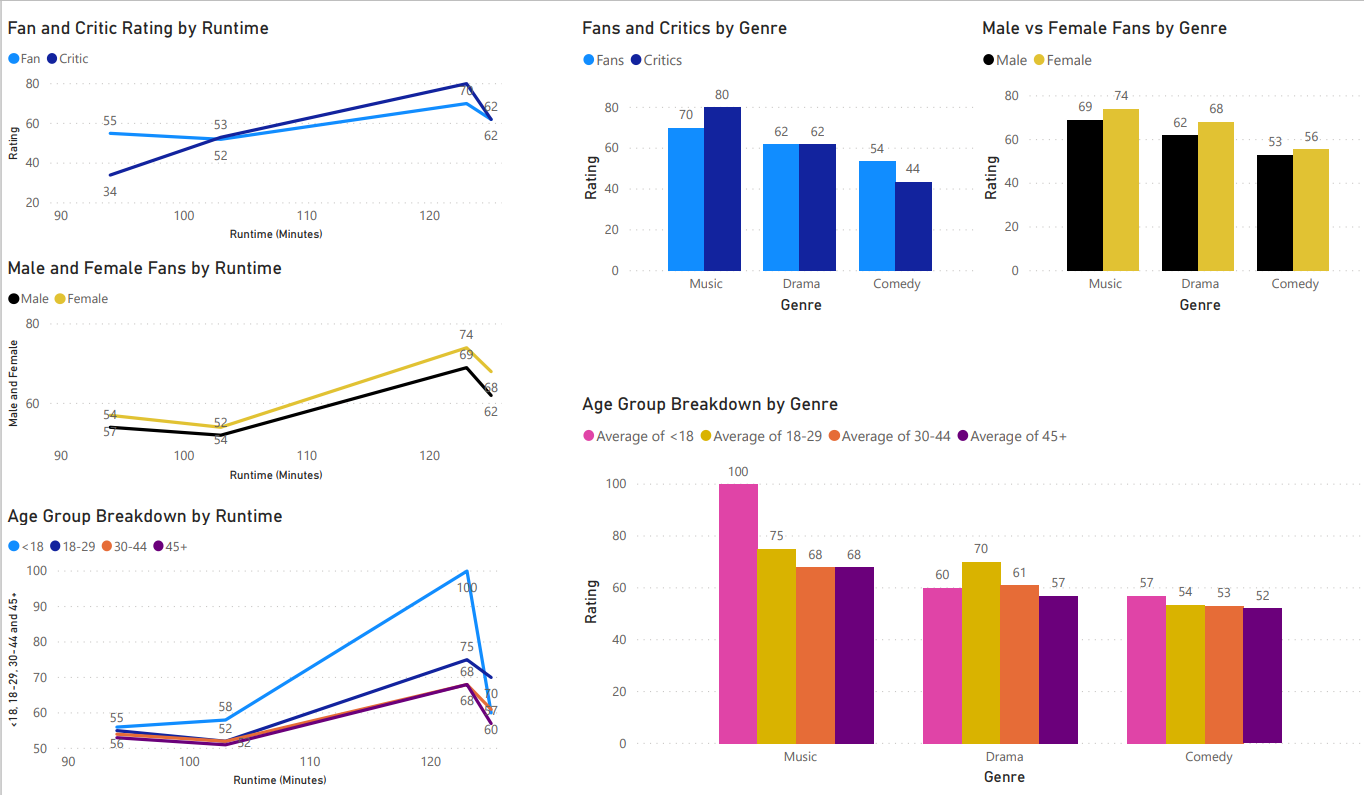 Not much to say here, really. Everybody seems to prefer the longer movies, which both clock in at around two hours–defying the logic that an hour and a half is the best length for a movie. No that doesn’t mean your movie is allowed to be Avengers: Endgame. Here we see that the R-rated movies–Charm City Kings and The Forty-Year-Old Version–get the highest average rating. Once again we also see that it’s the under eighteens that drive up the rating! I mention this every time! Someone has to stop letting these kids watch dirty movies, it’s ruining our society! Because there couldn’t be any other possible explanation for the discontent, right? 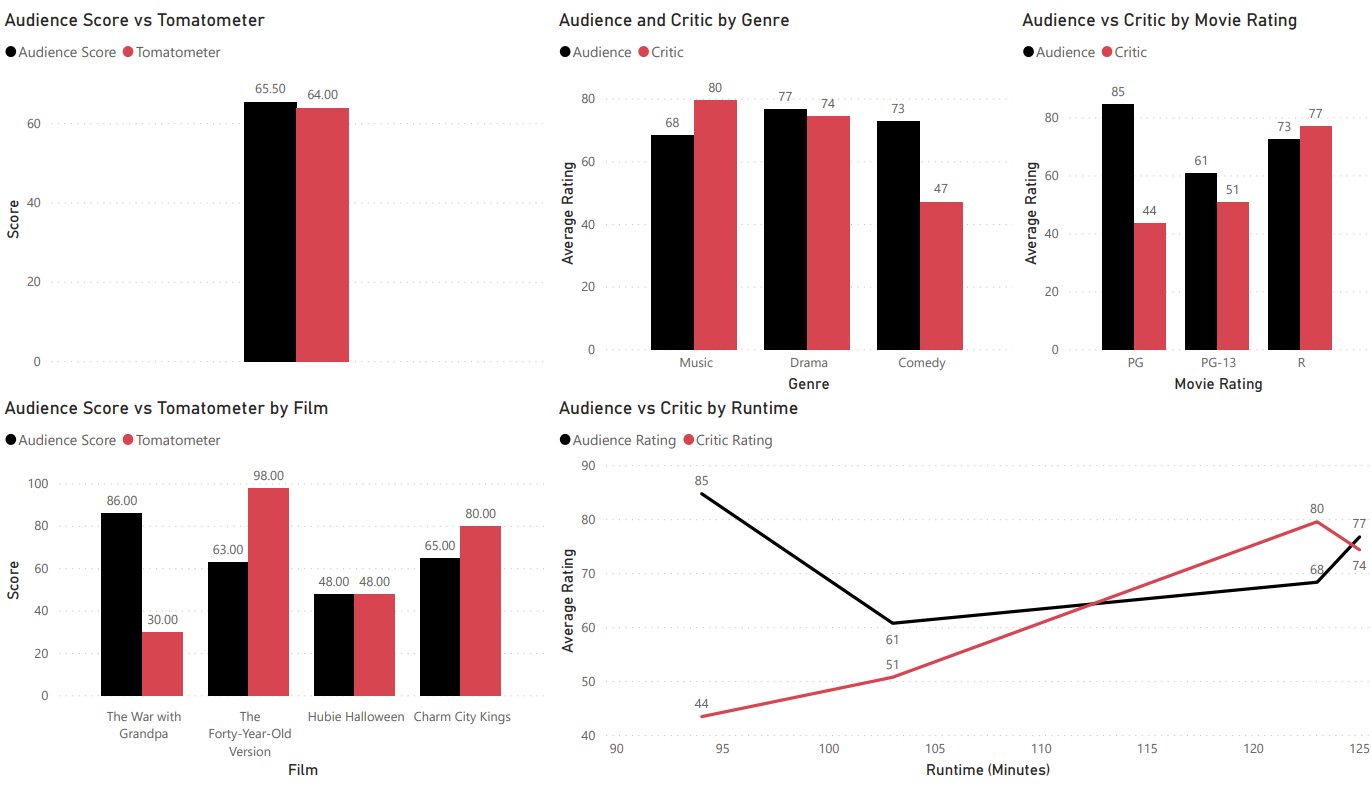 Now we enter the Rotten Tomatoes zone. This piece of the puzzle is always a little intriguing because of the Tomatometer and audience score. If you’ve read a Fans vs Critics article before then you know what’s coming.

The Tomatometer and audience score are not average ratings. The Tomatometer is just the percentage of critics that give it a passing grade. The audience score works basically the same, but it’s the amount of fans who give the movie a 3.5/5 or higher. So what this means is, a movie could get a 100% Tomatometer score by being the most average and inoffensive movie possible, just as long as every critic gives it a passing grade.

But that doesn’t mean that it isn’t neat in its own right! While on the surface the Tomatometer and audience score are almost the same, the breakdown by film reveals some tidbits.

There’s a fair bit of disagreement among most of the movies, with The War with Grandpa proving to be the most divisive. However, The Forty-Year-Old Version almost gets gets a perfect Tomatometer score, which I’m sure everybody behind it would have loved. It’s nice to see that everybody is in agreement on Hubie Halloween–which I reviewed here–so there’s some tranquility online at least. The science is in: don’t see the newest Sandler flick. Can’t debate the numbers.

When you swing back to the other charts with the average ratings, the audience prefers the PG movie and the critics prefer the R movie. Take from that as you will, even though the audience also really likes the R-rated movies. A bunch of kids seeing one movie, perhaps? Critics still fearing getting old themselves? Me making nonsense up?

This is the tally of how everything has stacked up since I began writing these articles. As you can see, it’s not too soon to call it on IMDB: we will always have more agreement than disagreement by a substantial margin. With Rotten Tomatoes there’s still a chance to see a turnaround.

On my way out I will just quote the greatest philosopher of our time, the Joker, in the landmark comic The Killing Joke. “All it takes is one bad day to reduce the sanest man alive to lunacy. That’s how far the world is from where I am. Just one bad day.” It may take more than one bad day–a couple bad weeks, realistically–but we could see it happen.

So that’s it for this week. Did you make an observation that I didn’t? Let me know in the comments below. Make sure to tune in next week for another instalment of Fans vs Critics!

The war with buns.