Rocky Is the Best Thing Ever and You Must Know

Enter the “No Objectivity Here Zone.”

The Rocky franchise has been important to the growth of my love for movies. In my early years I was a more casual moviegoer and somewhere along the way I took more of an interest in the art form. One factor in that was when I got a job and could afford to go to the theatre, but I distinctly remember my first movie obsession starting when I saw the first Rocky. It got so bad that I did the obligatory fanboy thing and included the words “Rocky” and “fanatic” in one of my (many) Hotmail addresses. This was serious.

So basically, what I’m trying to say is, you can–at least in part–blame Rocky for the abuse I put you people through here on Flickmetic.

It turns out that Rocky IV, V, Creed and Creed II were all released in November. In all of my infinite wisdom as a Rocky fanatic, I didn’t realize the importance that November has for the series. I hereby announce that November be known as Rockvember… Rockyember… Novrocky… er, we can work on that. In all seriousness, let’s talk about the best movie franchise to ever exist. 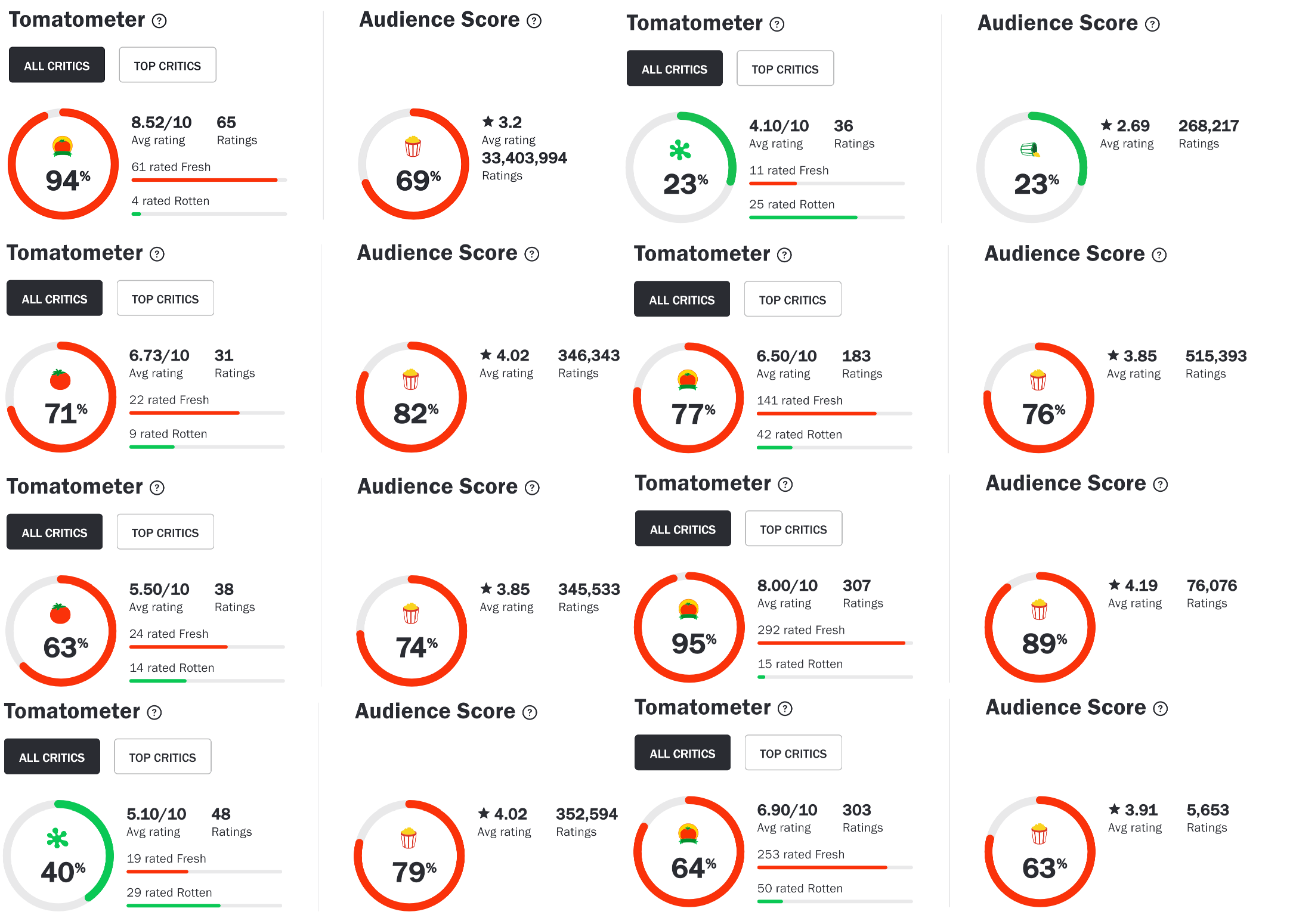 I wanted to see what people thought, according to Rotten Tomatoes. The results were shocking! They were so wrong! I couldn’t believe it so instead I did some magic and figured out the real reception. And now the reception adjusted for correctness.

Of Course, Then I Started Thinking About Graphs Before I discuss why I love Rocky so much, I wanted to assess the most beloved and most hated of the flicks, so I made some charts. To be honest, some of the results are stirring to me, somebody who gets easily excited by Rocky.

Sure, it’s not shocking that generally the audience rates higher than the critics, because that appears to be true across the website. There are plenty of reasons for that, it’s not worth discussing.

Some of the other findings reveal some stuff that I wasn’t certain about. Most notably, I figured that the series was in a state of decline for people since the first one. This is true for the critics, who liked the movies less and less as they went on, until Rocky Balboa changed the direction. With the fans it’s more erratic, constantly moving up and down.

Rocky and Rocky II are the only occasions where the reception switches places. On a personal note I’ve never really been able to decide which of the two are better, but I normally lean to the originator. There’s also a disparity when it comes to Rocky IV.

Then we have the spin-offs. That Creed is amazing is not the issue. Ryan Coogler was tapped after doing the incredible drama Fruitvale Station, so I had faith in him as an up-and-comer who could do the material justice. Spoiler: he slayed it.

It’s just fascinating how it is seen as the best Rocky by the fans and the second best by the critics. More astonishingly is the fact that apparently now the Rocky franchise can’t miss: Creed 2 is in the upper echelon of the series as well! Look, even myself as an addict had reservations about it before it came out. I was also incorrect because it was amazing. I understand that the reception isn’t absolutely glowing but it’s still respectable.

Everybody agrees on Rocky V.

Let’s Get Onto Why I Like Rocky So Much

There are many reasons. To break down every single aspect that I adore would take all day. I could speak on the montages that have become a meme but are still brilliant. What about the secondary and tertiary characters and the relationships? I could ramble on about the music. It would be possible to dissect the way in which the original nails the underdog story in a way that is a little grimy but not lost to nihilism.

Alas, I’m going to hammer home two key points that lay on the surface. It’s not unique to point these out because one of them is in the title and the other is in the genre classification. They’re crucial because if they don’t absolutely clobber these two elements then the movie is a failure, and perhaps I never seriously get into movies (clearly one of these is more important than the other).

I’m talking, of course, about boxing and Rocky as a character.

Rocky Is a Dude

I don’t refer to Rocky as a dude in a disparaging “hey, dude bro” way. The only time dude is uttered from my mouth is with admiration or condemnation because my friend is about to do something stupid. Rocky is a dude because he’s one of us and yet above us, while never knowing that he’s actually sent from heaven to right the wrongs foisted upon us by ourselves.

Rocky is ridiculously, but not in a conventional playboy way. He’s not a man living in innocence; he’s seen the horrors of everyday living, along with the struggles. But he’s also not torn down by the realities of poverty. His character remains strong and true to himself.

He’s equally capable of giving motivational speeches as he is lending legitimate humour to terrible jokes. There are lines of dialogue that would absolutely not work or make anybody laugh if Stallone/Rocky wasn’t such an endearing goofball. And yet, when necessary, Stallone gives Rocky a more serious tone that hits with a level of impact that other movies would die for. Rocky is a consistent character, and even when he betrays himself (such as in Rocky V), it still makes sense.

In Creed 2 there is a defining moment where he steps into his restaurant and is told that there is somebody who wants to speak with him. It’s Drago, his opponent from Rocky IV, sitting at a table waiting for him. This scene could have been played more dramatically but it was surprisingly low-key. Keep in mind that these two are mortal enemies due to Drago mercilessly murdering Apollo Creed.

There’s a tension that permeates from every single second that these two look at each other. There’s a deep resentment emanating from Drago, which is to be expected. Rocky, a man who tries hard not to be covered by that darkness, chokes down his own as he listens to Ivan speak. He attempts to play it off by telling Drago that it’s “a million years ago,” but you can sense the hatred. He’s dismissive of Drago’s plight, which is unusual for Balboa.

Drago gives a speech, Rocky mostly listens. The tension that is bubbling underneath finally emerges as Rocky gets up and threatens him. “I think we’re done here. Because around here, we put strays away,” he says, and that’s about as menacing as Rocky will ever get.

This scene–the best in the movie by far–was made possible because of the history created by the franchise, but also because Rocky is a wonderfully crafted character.

As an aside, but still relevant to his character, the critical consensus on Rotten Tomatoes says, “this story of a down-on-his-luck boxer is thoroughly predictable, but Sylvester Stallone’s script and stunning performance in the title role brush aside complaints.”

Perhaps I’m misrepresenting the first half of the quotation, but I don’t feel that it’s predictable per se. Yes, the underdog framework is present and executed perfectly, but there’s a little bit at the very end that I consider a memorable swerve.

Rocky simply replies, “don’t want one.” It’s not even declared bombastically, just matter-of-factly. To him it was not necessarily about becoming the champ, but proving that he could do it, stand toe to toe with a great boxer. It was always an internal struggle with himself, not a chase for gold and fame. He furthers this notion by yelling out the classic “Adrian!” as the interviewer is trying to get his post-fight thoughts.

The ending is beautiful because it captures the core of his personality while also going a little off the rails with what you might expect from this type of film–the underdog winning. He doesn’t win, but he goes to a decision. I’ve always appreciated that about Rocky. It’s not wholly exclusive to Rocky but it’s the path less taken for the sports genre.

The Rocky Movies Have Short Films in Them

Nobody would say that it’s unparalleled to incorporate the sport into the sport movie, but I’m arguing that Rocky has done it without equal, with a finesse that’s enviable.

Yes, they tend to be–to quote Good Ol’ JR–slobberknockers. Most movies use more wild action because it’s more cinematic. Due to the timeframe that they are required to work in and audience attention, it would be unappealing to film a technical showcase. They need to hit fast and hit hard because it’s going to be full of quick edits; showing someone whiffing on a punch constantly like he’s fighting Pernell Whitaker or Floyd Mayweather won’t really excite your typical viewer, at least not in this context.

It makes sense with Rocky because he’s ultimately a brawler. He’s rugged, gets smashed a lot and comes back. He understands fundamentals but doesn’t utilize them as much as a coach may want him to.

But that’s not the point I want to make. The boxing stands tall amongst all the others in the sports genre because of how it’s filmed. I proclaim it as worthy of being a film in itself in part because the directors/writers involved understand pacing. They almost always know when to ratchet up the tension, but also when to pull back and let it breathe. The in-between rounds play a role as well because not only do they function as a time to reflect, but they straddle a line between calmness and stress. The music, the impact of the punches, the facial expressions; they all play a pivotal role as well. They help the battle crescendo.

They embody all the emotions and reactions that you could possibly expect, all in a shortened, contained area. You want violence? How about sadness or happiness? What about fear, or desperation? You want both hope and hopelessness? What if you just want some badass beefcakes to ooze machismo like a prime Razor Ramon? It’s all there. Hell, they end the Cold War.

It also manages to pull of something that is not so simple: you know that he will most likely win, but it fools you–however briefly–into believing that maybe he won’t. It helps that the films don’t always go down that route, even by the end of the film, as evidenced in both Rocky and Rocky Balboa.

Sure, they have the added benefit from what came before. But if you ripped them out and slapped them on YouTube with a title like “Rocky Short Film DA BEST MOVIE EVER” it would still make sense. It would still work properly, as intended.

We’ll End This by Forcing Myself to Rank the Films

Just a few quick notes because I can’t just let a list sit there, with unspoken words: Rocky Balboa reflects both the character and Stallone himself getting older–it is the most tragic because his life has basically fallen apart. It’s also beautifully filmed.

In terms of Creed, as much as I love Rocky being the main character in other flicks, it’s hard to deny that Coogler aced this. As just a film itself it is certainly one of the best. It helps that Stallone’s performance was arguably the most powerful it’s ever been. On top of that, Coogler seemed to know just when to bring out the big guns.

Most people acknowledge Rocky V as the unwanted child of the franchise but not me and this guy. I told you, there’s no objectivity here at present.

Movies That Should Have Been a Short Film: American Sniper